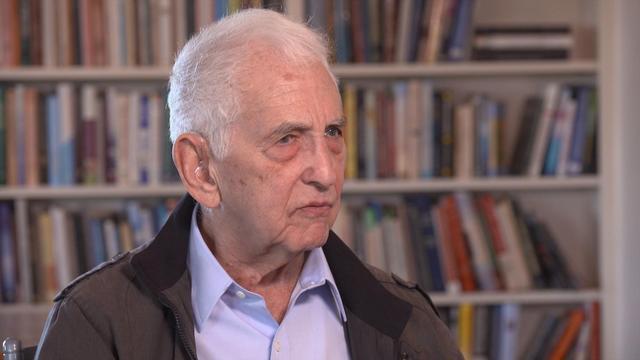 For more than 40 years, Daniel Ellsberg has been known as the man who exposed the U.S. government's secrets about the Vietnam War. But there's an even bigger secret he's been keeping about his involvement in planning for an even bigger war. That plan, in his words, was a "crime against humanity."

"The plan was to hit every city in the Soviet Union ... and every city in China. There was no plan for fighting Soviets that did not also involve annihilating the Chinese population," he told CBS News' Alex Wagner. "The result was a readiness to annihilate 600 million people. 100 Holocausts. When I say crime against humanity it was actually a crime against the existence of the human species."

In the 1960s, it was Ellsberg's job to update the nuclear plans left by President Eisenhower.

"What this revealed to me was something about our species that I've had to live with for the next 50 years and try to understand ... They're very normal, ordinary, smart, conscientious, patriotic people. Working in secret can carry out monstrous plans ... But it's the job and you go to work and you do what the boss wants."

Ellsberg said he tried to modify the plans to avoid cities.

"I tried to get the targeting off cities and off of Moscow and off China automatically. And actually I failed in all of that. ... Not hitting Moscow was just unthinkable," he said.

Ellsberg compares the war plans to the 1964 movie "Dr. Strangelove" which centers on the existence of a "Doomsday Machine" meant to automatically respond to a first strike attack with enough nuclear weapons to destroy all life on earth.

"Dr. Stangelove was a documentary. It saw the mad humor in the situation. ... It still makes me laugh when I think about it because it's hard to take this seriously, except that it's very serious indeed. Those were and are our preparations for nuclear war," Ellsberg said.

He intended to bring the information to the public after the close of the war in Vietnam but found that publishers then – and 30 years later – didn't feel it could sell.

"They don't want to hear anything with the word nuclear in the title … And that was true right up until the present," he said.

More than 50 years later, Ellsberg has published his experience in "The Doomsday Machine: Confessions of a Nuclear War Planner." He wrote the book in his bunker-like office, referencing documents from his considerable archives.

Now, the world is paying attention. North Korean leader Kim Jong Un has been testing intercontinental ballistic missiles with President Trump threatening the full force of the U.S. Military and Russian president Vladimir Putin this week shocked the world, unveiling an updated weapons system – including a new ICBM that he says is "invincible."

Ellsberg said the brinkmanship doesn't feel all that different this time around.

"The brinkmanship has been there. As I've said it was a way of using nuclear weapons without pulling the trigger. Using a gun at someone's head in a confrontation without pulling the trigger. You're using the gun, and to say we haven't used these weapons or that they've proved useless is simply misleading. Trump and Kim (Jong Un) are both using their weapons right now ... and one or the other may back down. Or not," he said. "Putin is making similar first use threats. His are threats of crazy action, just as ours are. And it doesn't unfortunately mean that they will never be carried out."

Now 86, Ellsberg and his wife Patricia have been privately living with this knowledge for as long as their nearly 50-year marriage. Today, it's their fellow citizens who are also living on edge.

Earlier this year, a false alert was sent to mobile phones and televisions warning of an incoming ballistic missile to Hawaii.

"What Hawaii did, the alert, was to make a million or so Hawaiian citizens aware for the first time of the kinds of dangers that we have all in the world have been living with for half a century without thinking about them and what to do. Some dived into manholes. Many people interestingly sat in bathtubs, a total symbolic action. It's not what I would have done."

What Ellsberg would have done?

"I would have invited Patricia to lay down with me and kiss for as long as the alarm went on," he said.

Asked if it's a miracle that we haven't had a nuclear Holocaust, Ellsberg said, "Yes. Miracles do happen."

"It's not impossible that there will be another 70 years. It would take another miracle. ... What I'm working at is you're trying to alert people to the danger before the alarm sounds to do something about it so the risk will be somewhat less."