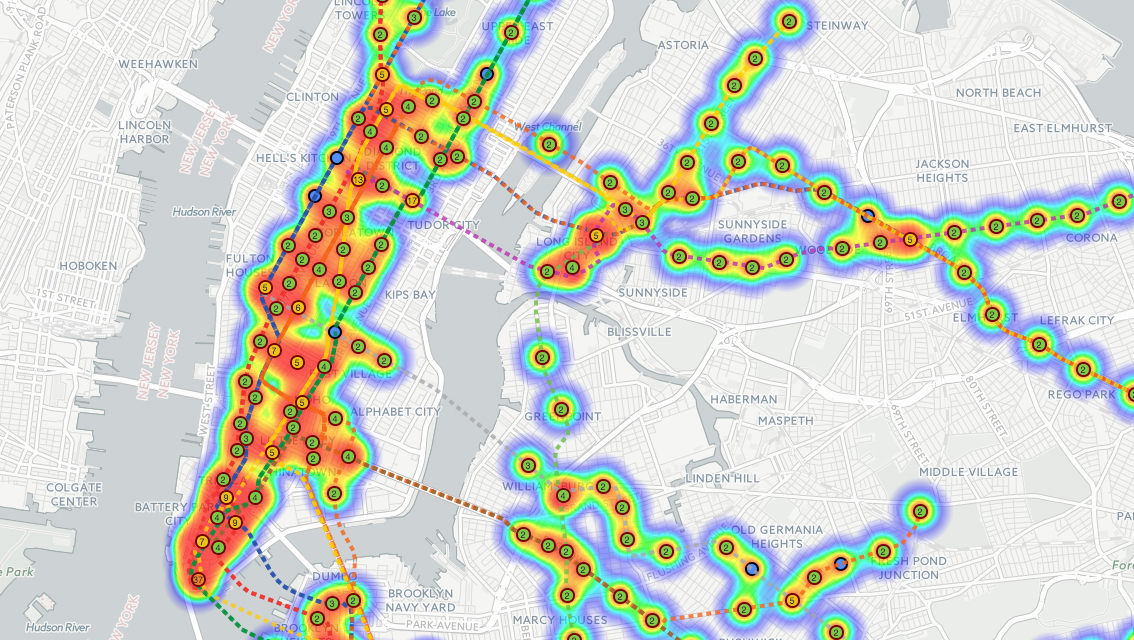 New York City's subway system has never been known for its cleanliness, but even the most jaded city dweller may be shocked and disgusted to learn just what types of microorganisms are lurking on the average subway pole.

A group of researchers led by Christopher Mason of the department of physiology and biophysics at Weill Cornell Medical College swabbed surfaces and collected specimens from the subway system to develop a map of what they called an "urban microbiome." The result, seen above, is called the PathoMap and it illustrates concentrations of 637 known bacterial, viral, fungal and animal microbes detected in the study.

The vast majority of the bugs Mason and his co-authors collected were non-pathogenic and represent normal bacteria present on human skin and the human body, the study published in the journal Cell Systems found.

The findings were "generally reassuring, indicating no need to avoid the subway system or use protective gloves," Weill Cornell Medical College said in a press release. Nearly half of the samples contained DNA profiles that scientists had never seen before.

Twelve percent of the bacteria found on the subway system were associated with disease. Antibiotic-resistant bacteria were found in 27 percent of the samples collected. Two samples turned up DNA fragments of Bacillus anthracis, which is anthrax, and three samples turned up a plasmid associated with Yersinia pestis, or Bubonic plague, the study said.

"They are instead likely just the co-habitants of any shared urban infrastructure and city, but wider testing is needed to confirm this," Mason said in the release.

No case of Bubonic plague has been reported in New York City since the study began, the study emphasized.

"Despite finding traces of pathogenic microbes, their presence isn't substantial enough to pose a threat to human health," Mason said in the release. "The presence of these microbes and the lack of reported medical cases is truly a testament to our body's immune system, and our innate ability to continuously adapt to our environment."

The PathoMap breaks down every point where swabs were taken at each of the city's subway stations -- including benches, turnstiles, stairway railings, train seats, poles, trash cans, and kiosks -- and the taxonomic classification of the bacteria, viruses and fungi that were found.

Nearly half of the DNA from all the samples, 48.3 percent, did not match any known organism, "which underscores the vast wealth of unknown species that are ubiquitous in urban areas," said co-lead author Ebrahim Afshinnekoo, a senior at Macaulay Honors College-Queens, who starting working on the project as a Tri-Institutional Computational Biology and Medicine Summer Student in 2013.

The study also found significant variation across the different subway lines and parts of the city. The Bronx was found to have the most diverse range of microbe species, followed by Brooklyn, Manhattan and Queens. Staten Island was the least diverse.

The idea for the PathoMap goes back to 2010, when Mason picked up his daughter from day care and noticed that she and all of the other children were playing with the same toys and putting them in their mouths.

"What is on those toys, and the surfaces in this environment, and all the other environments, and how much is my daughter absorbing every day?" Mason was quoted on the PathoMap website.

The resulting study in 2013 led to the creation of the PathoMap, which used the subway system as a representation of the population of New York City.

The results of the study could be used by the city for long-term disease surveillance, response to bioterrorism threats, and long-term health maintenance, the researchers suggested.