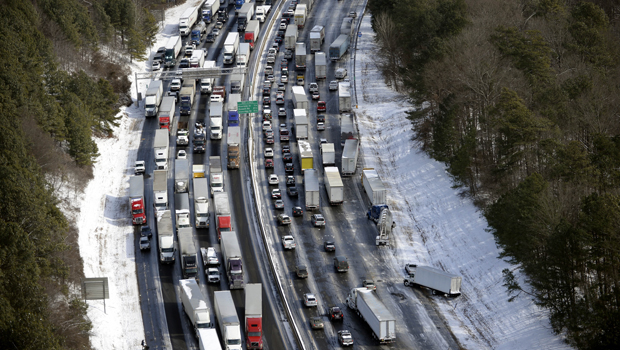 ATLANTA -- Georgia Gov. Nathan Deal took responsibility Thursday for the poor storm preparations that led to an epic traffic jam in Atlanta and forced drivers to abandon their cars or sleep in them overnight when a storm dumped a couple of inches of snow.

Deal and Atlanta Mayor Kasim Reed have found themselves on the defensive ever since the snow started falling and commuters rushed home at the same time schools let out, causing gridlock.

"We did not make preparations early enough," Deal said at a news conference. "I'm not going to look for a scapegoat. I am the governor. The buck stops with me."

As Deal said his agencies would undergo reviews and make new plans, police and the National Guard helped people reunite with their abandoned cars, two days after a winter storm hit the Deep South.

The cleanup could take all day. At the peak of the storm, thousands of cars littered the interstates in Georgia and in Alabama. Some people ran out of gas, some were involved in accidents and others simply left their car on the side of the road so they could walk home or to someplace warm.

Later Thursday, the sun was out across much of the South, temperatures were rising and snow was beginning to melt.

About 1,600 students in Alabama who spent two nights at schools were finally home, and all of the state's highways were reopened. Still, officials warned drivers to be extremely cautious and to be on the lookout for icy patches. Schools and government offices were still closed in several states.

At least eight people died from traffic accidents and six people were killed in fires blamed on space heaters. The latest was in Savannah, where two children were killed early Thursday as temperatures hovered below freezing. In the Midwest, an 86-year-old woman died of hypothermia outside her suburban Chicago home.

North Carolina still faced icy conditions, with dangerous roads in much of the state as bone-chilling temperatures overnight refroze any snow that had melted.

There was a lot of cleanup to do in the Atlanta area. The Georgia State Patrol said more than 2,000 cars were abandoned along the freeways and they would be towed Thursday night if people did not get them. Officials said it was critical to get those cars off the highways so the emergency shoulders were available during normal traffic Friday.

Deal said the state would be much more cautious for future storms. For his part, the mayor earlier took the blame for businesses, schools and government letting out at the same time.

The Atlanta area was crippled by an ice storm in 2011, and officials had vowed not to be caught unprepared again. But only hours after the storm hit, it was clear the city was again caught off guard.

Charley English, the head of the Georgia Emergency Management Agency, also took some of the blame.

"I made a terrible error in judgment earlier, late on Monday afternoon and early Tuesday," he said at the news conference. He also acknowledged making "inaccurate and regretful" statements about Georgia's response at an earlier press conference.

Earlier, Deal blamed federal forecasters, saying he was led to believe it wouldn't be so bad.

However, the National Weather Service explicitly cautioned on Monday that snow-covered roads "will make travel difficult or impossible." The agency issued a winter storm warning for metro Atlanta early Tuesday and cautioned against driving.

Overall, the Georgia State Patrol responded to more than 1,460 crashes between Tuesday morning and Wednesday evening, including two fatal crashes, and reported more than 175 injuries.

State transportation crews spent much of Wednesday rescuing stranded drivers and moving disabled and abandoned vehicles that littered the interstates, medians and shoulders.