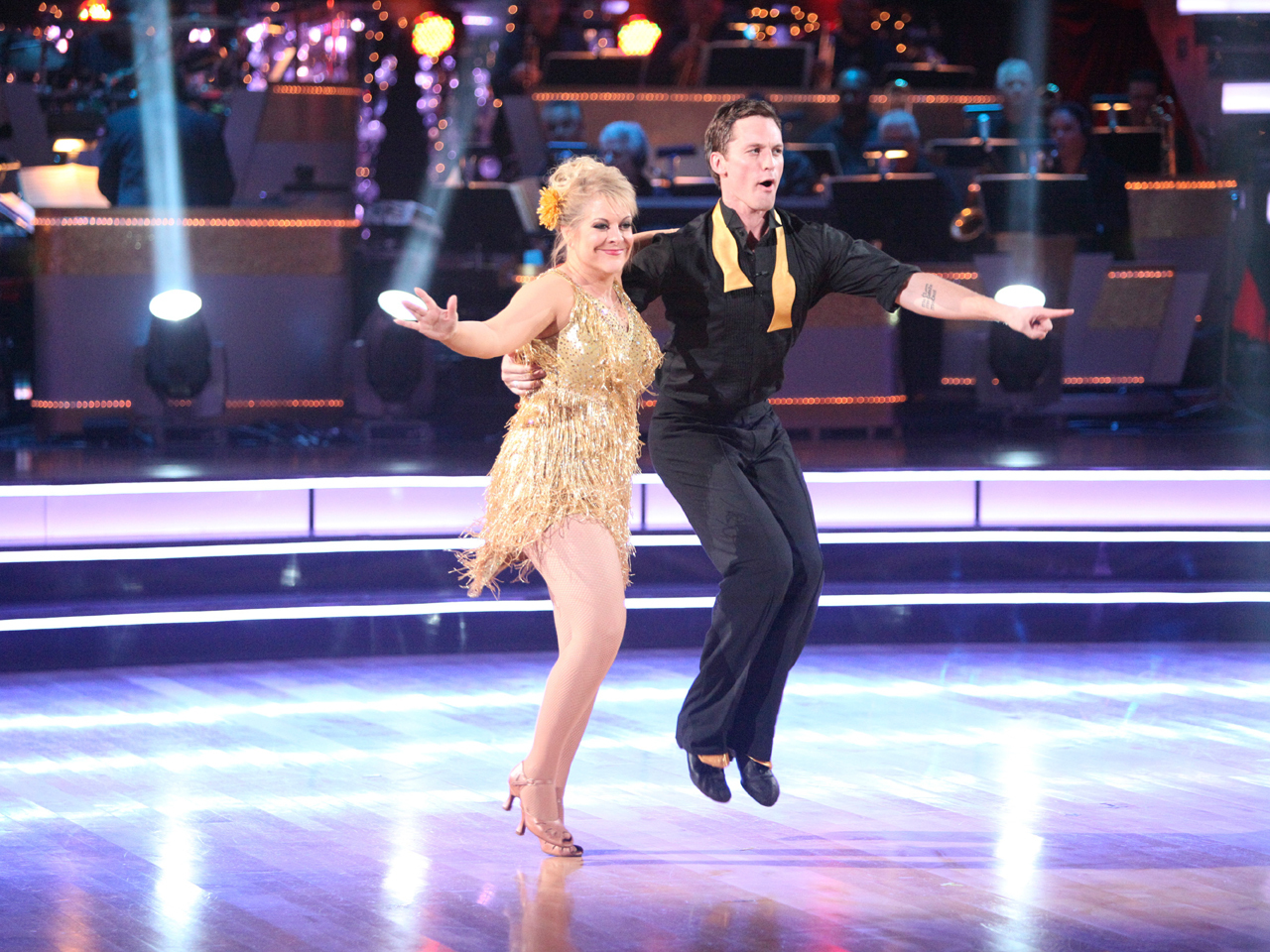 (CBS) Somewhere, Chynna Phillips was sipping a glass of Falanghina and gently muttering: "Guilty at last."

Phillips, who had been eliminated far too soon, surely would have wondered how one of "Dancing with the Stars" glaringly weak dancers, Nancy Grace, had lasted so long before finally making her way towards her limousine for the last time.

But before the final fall for Grace on Tuesday's show, we had the usual intimate secrets revealed from behind the glamorous and amorous moves.

Before he danced with Hope Solo, Maksim Chermkovskiy told her simply to breathe. He would "literally" carry her through it, which, at times, he did.

After an extremely high-pitched Carrie Ann Inaba had shrieked at Solo that she wanted to give her a solo hug, Len Goodman sighed and wished he'd done the same with Chmerkovskiy. They had enjoyed an earlier contretemps when the Ukrainian had suggested that the Brit ought to pack his bags and waft back to Blighty.

Talking of Russians, there was something so definitively powerful about Karina Smirnoff demanding that J.R. Martinez grab her butt. For anyone who admires a woman who takes control, this was a scene to savor and replay a thousand times in one's sleep.

This level of sexuality and sensuality can lead to any eventuality.

Their eventuality was that they were first to be told they had made the semi-finals. Yes, this was little like the Yankees being told they were still owned by a Steinbrenner, but it was beautiful all the same.

Soon Solo, the Queen of Tortured Sports-Girl Drama, was also told that she and her Ukrainian Brit-kisser were in the semi-finals.

Conversely, Rob Kardashian was told that he and partner Cheryl Burke were in dreaded jeopardy, which meant, might I remind the recently born, nothing at all.

They might as well have been told they were in Jello, in Germany or in Gelato.

Remaining with their fate left hanging by a garter were Grace and Ricki Lake. Grace explained she thought her tango the previous night had been wonderful.

Only a lawyer would have tried that.

In order to enhance the tension -- well, there was still half an hour to go -- the producers generated Andrea Bocelli.

In order to enhance tension in your cranium, we had to suffer Kenny Mayne and Jerry Rice attempting to be hilarious.

This was troubling in the extreme. Indeed, it troubled the extremes. But it wasn't the end of NC-17 sexuality. Soon, we were to enjoy members of Cirque du Soleil clutching their members in honor of Michael Jackson.

As they writhed and jiggered, somewhere Janet Jackson was staring goggle-eyed and wondering: "What did I do, compared to this?"

After more singing and dancing that pleasantly filled the time, we were suddenly reminded that someone had to go.

It was revealed that Grace was worried before her tango that she and partner Tristan McManus wouldn't be able to beat the 9s awarded to other dancers.

McManus deftly replied: "Don't worry about that." He left hanging the idea that they had less chance of being awarded 9s than Charles Manson has of securing a show on Court TV.

And so we came to the final verdict. Might it be that Grace's legion of fans had sent Kardashian to the gallows?

Might it be that, of these two lawyer-related humans (Kardashian's dad was one of O.J. Simpson's lawyers), it would be the reality star rather than the really mouthy prosecutor whose lips would taste dust?

"We can't be disappointed to get this far," insisted McManus, who has become something of a heartthrob for many.

The question next week will be whether the two relatively talented dancers -- Lake and Martinez -- still have enough of a throbbing heart to produce more winning performances.

Naturally, most people will merely be wondering if Kim Kardashian will have the heart to show up and support her little brother with the throbbing bottom.

"Dancing with the Stars." Excitement to the very last.