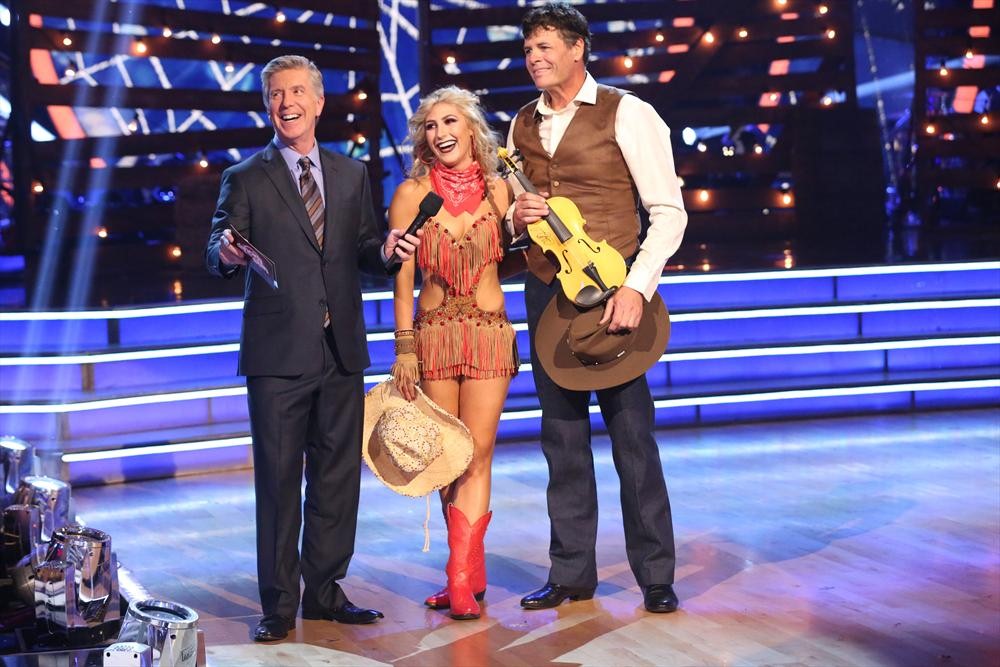 This week's "Dancing with the Stars" was all about dynamic duos! From Bonnie and Clyde to Batman and Robin, the stars and their pro partners brought famous couples to life through dance, and it was one of the most enjoyable shows of the season so far.

Not only were the couples dressed up as famous duos, but it was revealed that there would also be a head-to-head dance off, pairing each couple against another in a series of three impromptu performances that could earn them extra points. However, the highest-scoring couple of the night would be totally safe from elimination, and wouldn't have to compete in the dance-off. The excitement was brewing right off the bat.

It was a fun evening full of wonderful and inventive dances -- as well as some stranger ones -- so let's jump in to the best, the worst and the weirdest moments of the night.

Lea and Artem as Bonnie and Clyde - Taking the stage in a vintage 1930s Ford, Lea Thompson and Artem Chigvintsev performed as the classic bank robbing couple Bonnie and Clyde. While the dance supposedly felt too old fashioned for judge Julianne Hough, you simply can't deny how incredible the 53-year-old Thompson's legs looked in that gorgeous outlaw outfit.

Lea and Artem as Bonnie and Clyde - Taking the stage in a vintage 1930s Ford, Lea Thompson and Artem Chigvintsev performed as the classic bank robbing couple Bonnie and Clyde. While the dance supposedly felt too old fashioned for judge Julianne Hough, you simply can't deny how incredible the 53-year-old Thompson's legs looked in that gorgeous outlaw outfit.

Carrie and Alfonso Are Sexy Batman and Robin - So that's what Carrie Kelley looks like all grown up? Blonde and curvy? Okay, sure. Well, Alfonso's wacky Batman costume fit well into the theory that their dance was based on Frank Miller's "Dark Knight Returns," what with being gun metal grey. Alright, that's enough nerding out over Batman. It was also a great dance.

Michael Waltrip Walks Around the Stage (Again) - This week, Michael and his pro partner Emma Slater danced as Tarzan and Jane. The thing is, if you're going to perform as Tarzan, a super athletic hero who swings from vines and is generally very dexterous, maybe you should be able to do more than slowly walk around and spin once or twice. It was much better than his efforts last week, but he's still so far behind the rest of the pack.

Michael Waltrip's Dance-Off Performance - Honestly, it doesn't feel good to have both "worst" moments of the show centered specifically on Michael, but his dance-off rumba at the end of the show basically involved him standing totally still while the very talented Emma Slater danced around him until he vaguely twirled for a second and managed to hold her without dropping her. So, that's sort of like dancing?

Tribute To The Royal Couple - Coming back from a commercial break, the show supposedly paid tribute to the Royal couple -- Prince William and Kate Middleton -- with a short, sexy performance in semi-skimpy wedding garb set to Iggy Azalea's "Fancy." So "tribute" might be a stretch, as it was weirdly sexual.

Drawing Attention To Mark Touching Sadie In Delicate Areas - Sadie and Mark did an interesting-but-strange number as Adam and Eve. The dance was fine, but in the pre-recorded segment they cut in a bite about Sadie asking if Mark needed to put his hand on her butt when he lifted her in the air. Mark responded that he did, because it's the only way to be sure not to drop her. What was so weird about it was that Mark DOES need to place his hand there to lift her, but she's 17, so drawing attention to that just felt intentionally creepy and totally out of place.

Also, and this is just a biblical note, the dance was about them eating the apple but they were already clothed in leaves. According to scripture, that didn't happen until after they ate the fruit of knowledge. Just saying, it seems like Sadie should have brought this up at some point.

Bethany and Derek's Racy "I Love Lucy" Tribute- While the dance was great, and the inspiration and sets were adorable, Bethany's super sexy, low-cut midriff seemed a little much. They certainly wouldn't have let that air back in the 1950s. It almost looked like an adult-film parody of the classic sitcom.

Janel and Val were the highest-scoring couple of the night, meaning they were totally safe from elimination this evening. However, the remaining six couples were paired off in a series of dance-offs that would earn them extra points that could go toward saving them from elimination.

Alfonso and Witney vs. Lea and Artem - While both couples were close and performed their jive well, Alfonso and Whitney won hands down with a unanimous decision in their favor from the judges, earning them three extra points.

Sadie and Mark vs. Bethany and Derek - This one was simply too close to call for the judges, as both of them rocked the Cha Cha Cha. With the judges' votes split two-and-two between the couples, the final decision went to head judge Len Goodman, who had voted for Bethany, giving her and Derek the extra points.

Tommy and Peta vs. Michael and Emma - Tommy and Michael both had to dance the Rumba. Tommy gave one of his best performances of the whole show, while Michael stood there and tried to not drop Emma. Then he turned once. Needless to say, the judges unanimously decided that Tommy should get the extra points.

The elimination ultimately came down to the two couples that you expected -- and have been expecting for weeks -- Michael Waltrip and Tommy Chong. However, it was clear that between the two, Tommy simply had more charm and was a (slightly) better dancer, and it was Michael who got the chop.

Tune in next week to see the couples compete with songs and dance styles chosen by "DWTS" viewers.