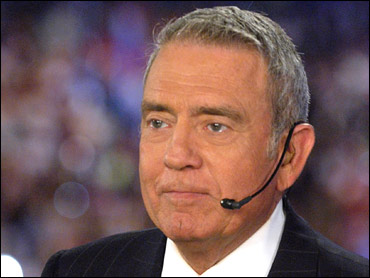 Dan Rather announced Tuesday that he will step down as anchor and managing editor of the CBS Evening News in March, 24 years after his first broadcast in that position.

Rather will continue to work full-time at CBS News as a correspondent for both editions of 60 Minutes, as well as on other assignments for the news division. His last broadcast as anchor will be March 9, the 24th anniversary of when he assumed the position from Walter Cronkite.

CBS made no mention of a potential successor.

Rather also made a

brief announcement
to viewers in between Evening News segments Tuesday.

"It has been, and remains, an honor to be welcomed into your homes in the evening and I thank you for the trust you have given me," he said.

Rather, 73, has come under fire for his 60 Minutes report on President Bush's service in the National Guard during the Vietnam War. The report relied on documents that cast Mr. Bush's service in a negative light. Critics charged that the documents were forgeries, and CBS News was unable to vouch for their authenticity. An independent panel is now investigating the matter.

Rather spoke of his decision to step down to more than 100 staffers in the CBS newsroom on Tuesday afternoon. In brief remarks, the newsman said that he had considered retiring since the late 1990s. He added that the Sept. 11, 2001, terror attack prompted him to put aside such thoughts.

He portrayed his decision to leave the anchor chair as a "mutual decision" made last summer.

The veteran newsman also said the decision was not influenced by the National Guard story. He said the purpose of announcing his decision now -- prior to the release of a report on the story by an outside panel -- was to separate the two events.

He acknowledged, in a vintage Ratherism, that the controversial story had become a "hippopotamus in the bathtub."

Rather has long been a target of critics who accused him of a liberal bias, and there's even a Web site devoted to that notion. The National Guard story sent those critics into overdrive. Rather's announcement Tuesday led one Republican congressman from Pennsylvania to issue a statement saying, in effect, good riddance.

"Dan Rather has been a legend in media for more than a quarter-century to many people around the world, but not to me," Rep. Bill Shuster said. "For the entirety of his career, Rather has allowed his liberal bias to shape the news rather than report it."

Rather has worked at CBS News for more than 40 years and made his name as a reporter covering the Nixon White House. His nearly quarter-century at the helm of the CBS Evening News is the longest at the helm of any U.S. network evening broadcast.

"Dan's dedication to his craft and his remarkable skills as a reporter are legendary," said CBS News President Andrew Heyward. "He has symbolized the CBS Evening News for nearly a quarter century."

Rather's announcement comes eight days before his NBC rival, Tom Brokaw, steps down as Nightly News anchor and is replaced by Brian Williams.

The triumvirate of Rather, Brokaw and ABC's Peter Jennings has ruled network news for more than two decades. Rather dominated ratings after taking over for Cronkite during the 1980s, but he was eclipsed first by Jennings and then by Brokaw. His evening news broadcast generally runs a distant third in the ratings each week.

Brokaw said that he was "pleased for Dan that he's come to a conclusion about his own life, as I have in my case."

"Dan and I have known each other competitively and personally for a long, long time," Brokaw said. "Occasionally on the competitive side, it would be tiny bumps in the road, but when you think of all that we've been through, we have a pretty strong relationship. So I wish him well."

ABC News said Jennings was traveling and could not immediately be reached for comment.

About his successor, Rather said, that "I hope it'll be somebody from the inside. But whoever it is will have my complete, unadulterated support and encouragement. Probably the best way I can help is to stay out of the way."

His hard news style was mixed with a folksy Texan style: "This race figures to get nasty enough to gag a buzzard." But odd incidents dogged him: In 1987 he walked off the set, leaving CBS with dead air, to protest a decision to let a tennis match delay the news.

Rather began his career in journalism in 1950 as an Associated Press reporter in Huntsville, Texas. Rather joined CBS News in 1962 as chief of its Southwest bureau in Dallas. In 1963, he was appointed chief of the Southern bureau in New Orleans.

During that time, he reported on racial conflicts in the South and the crusade of Dr. Martin Luther King Jr., as well as the death of President Kennedy.

He took the anchor chair in 1981, and has reported on every major news story since then.

In February 2003, Rather secured the most sought-after interview in the world: an exclusive one-on-one with Saddam Hussein in Baghdad, the first the Iraqi leader has conducted with an American journalist since 1991.

Rather also reported from Kabul on the United States' effort to oust the Taliban and from Jerusalem and the West Bank during the largest Israeli military action in two decades.

He gained special notice for his live anchoring of CBS News' coverage of the Sept. 11 attacks and his around-the-clock reporting in the days that followed. In the weeks after 9/11, Rather filed reports from Ground Zero and on the attacks' aftermath in New York and the nation for the prime time news magazine 48 Hours.

Rather issued this statement on his departure from the anchor chair: "I have been lucky and blessed over these years to have what is, to me, the best job in the world and to have it at CBS News. Along the way, I've had the honor of working with some of the most talented, dedicated professionals in the world, and I'm appreciative of the opportunity to continue doing so in the years ahead."