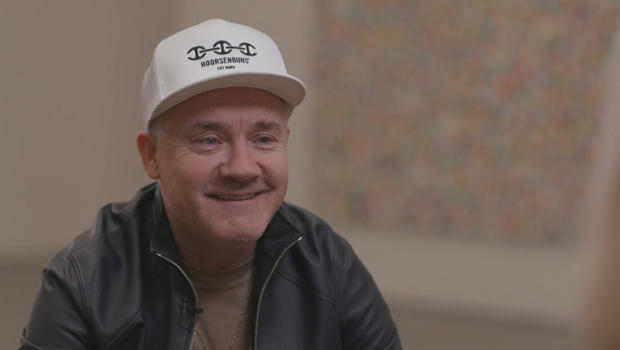 How's this for a story? A few years back, the wreck of an ancient sailing ship, the Apistos, was found off the coast of East Africa. The ship's name translates as "unbelievable" in ancient Greek, and the cargo she carried was pretty unbelievable indeed. Divers found treasure by the ton, including gold-plated sculptures and huge bronze statues crusted in coral.

The salvagers packed it all off to Venice, where crowds marveled at the treasures of the "Unbelievable." But here's the thing: there really was no ancient shipwreck, or any lost treasure; that whole undersea recovery was staged for the exhibit. And the sculptures on display in Venice weren't created by craftsmen in ancient Rome, but by millennials in matching coveralls at a foundry north of London.

The treasure, and the made-up story behind it, was yet another outrageous creation by British artist Damien Hirst.

"We want it to look like it's real, not like it's been manmade, the coral anyway," Hirst said.

The coral might be fake, but the treasure is real enough. Most of these pieces have already sold at prices reportedly up to $5 million each.

At 53, Hirst has been described as a genius, and a con-man, but it's hard to argue with his success. An original work like one of his spot paintings at New York's Gagosian Gallery could be worth more than your house, even though his staff might have done the actual painting.

"As soon as I could afford it, I had other people to make my paintings," he said.

Why? "I just don't think it's important. What's important is that the end result is exactly what I want."

"Even if it's not your hands doing the work?" asked correspondent Tracy Smith.

"But, I mean, I feel like it is my hands doing the work. It is mine whether I have some to do the work or not, as long as I'm making sure that the end result is what I want."

And what he wants, sells: One auction in 2008 alone reportedly brought him more than $170 million. In fact, Hirst is one of the richest artists on Earth, with a net worth said to be close to a quarter of a billion dollars.

Still, he can remember leaner times: "I remember when I opened my first bank account. The bank manager said, 'What do you do?' I said, 'Oh, I'm an art student.' He went, 'Uggh,' and he sort of pulled a face.

"Now, I get Christmas cards from my bank manager. Which I don't like, either!"

Hirst grew up in Leeds, where he says he failed at pretty much everything except drawing, so he became an artist. A 1991 piece really put him on the map: a 14-foot shark swimming in formaldehyde.

"What was it about the shark, about actually getting a [real] shark, that was important to you? You could have just painted a shark?"

"My biggest fear was only making an artwork that you could walk up, look at, think Naah, and walk away from. And I just thought, I didn't want art you could choose against. I thought I wanted art that just got you, whether you liked it or not."

"That was the biggest fear?"

"Yeah, to be ignored, yeah. I didn't want to make art what you could ignore."

Turns out, he was impossible to ignore. In Damien Hirst's hands, anatomical models became giant sculptures; medicine cabinets became shrines for multi-colored pills. His work often showed a preoccupation with death, like the platinum skull set with more than 8,000 diamonds, that sold for around $100 million.

Hirst said, "I realized it was the first thing I made that I couldn't have in my own home without security! You think, 'Wow, you know, that people could probably kill each other for this!' It's like, you know, you've created quite a monster."

He also created a reputation for partying as hard as he worked. "When I first started drinking, I never used to get a hangover," he said. "And I measured the last one I had, which was 11 years ago, and it was like seven or eight days, and I was still feeling bad."

"A seven- or eight-day hangover?"

"Yeah. 'Cause you're just not able to do it anymore."

But that was then: These days, beauty is his drug of choice.

Just look at the colors in these stunning mosaic patterns. They're even more amazing when you see what they're really made of: butterflies.

He doesn't catch them all himself; the butterflies come from old collections he buys up.

And close by, there's a group of artists who execute his vision, spending their days in his Gloucestershire studio, hunched over works in progress, using bolts to keep the butterflies' wings from fluttering off before gluing each one oh so carefully into place.

Of course, not every Damien Hirst piece is as meticulous as this. Some are downright messy, like his spin paintings, where he throws paint onto a spinning canvas to create a very colorful, and very expensive, splatter.

"My business manager said to me, 'That's an amazing painting you're making, Damien,'" Hirst said. "And I said, 'But you think everything I make is amazing.' And he said, 'Yeah, but it is!' And so, it's tempting to want to believe that, but you know it's not true. So, it's like not everything – you know, everybody makes crap paintings at some point."

"Even you?" Smith asked.

"Yeah, everyone. Especially me!"

The idea is that anyone can make great art, even those of us with no talent at all. And Smith tried her hand at it.

But Hirst was never one to play it safe. He then splashed on some paint thinner, and instantly regretted it. "So, does that happen to you when you go just a teeny bit too far and think you've ruined it?" Smith asked.

So, maybe it wasn't his favorite, but then again, everything he touches is worth something.

And now, after three decades creating one outlandish masterpiece after another, the artist is no longer a young man, but Damien Hirst has somehow found a kind of beauty in that, too.

He said, "I've definitely got less time in front of me than behind me, I think I can safely say."

"How are you feeling about that? You, who has confronted death so many times with your work?"

"I kind of feel, as you get older, hopefully you get a bit wiser. Maybe I feel a little bit wiser? Maybe!"

Meret Oppenheim: An artist's reinvention of herself
Thanks for reading CBS NEWS.
Create your free account or log in
for more features.
View CBS News In
CBS News App Open
Chrome Safari Continue
Be the first to know
Get browser notifications for breaking news, live events, and exclusive reporting.