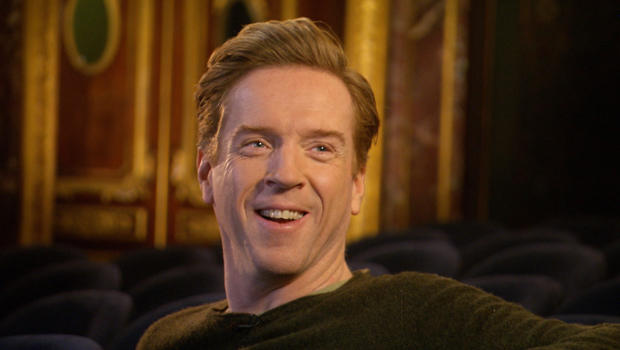 Damian Lewis was widely praised for his portrayal of a no-nonsense Army officer in HBO’s critically-acclaimed mini-series, “Band of Brothers.” Lewis has made quite a name for himself playing a number of all-American roles even though, as Jim Axelrod explains, there’s nothing all-American about him:

On the north shore of Long Island actor Damian Lewis is showing us around the fictional home of hedge-fund mogul Bobby Axelrod, the character Lewis portrays in “Billions,” which is having its second season premiere tonight on CBS-owned Showtime.

“It’s a nice spread!” Jim Axelrod laughed. “Some Axelrods live better than others!”

At this point in his career, it’s no surprise Lewis has created another indelible working class character. It’s his wheelhouse, and what he loves most about acting on TV these days: the chance to explore a character’s complexity in a way a two-hour feature film doesn’t always provide.

Watch a teaser for “Billions”:

Lewis has portrayed both marvelous people, like war hero Dick Winters in HBO’s “Band of Brothers,” and despicable, like double- (sometimes triple-) agent Nick Brody in “Homeland.” Together with Bobby Axelrod, they are three of the most compelling American characters of this new Golden Age.

But what is surprising is that Damian Lewis is not American at all.

“It’s funny you’ve just brought this up because when I was getting changed [into Bobby’s clothes to come do this interview], I reminded myself to do it in English, in my London accent.”

“Does it take you a while to slide back into the British life?”

Not just a Brit, but an upper-crust Brit -- an officer of the Order of the British Empire. His grandfather was the Lord Mayor of London.

Lewis was raised with his three siblings in the posh St. John’s Wood section of London. At the age of eight he was sent off to boarding school, eventually landing at Eton, a seat of British privilege that counts both Prince William and Prince Harry as alumni.

Axelrod sat down with Lewis at London’s historic and ornate Haymarket Theatre, which has the reputation of being a stars’ theatre, where such greats as Olivier and Gielgud have performed. It’s there that Lewis is spending his hiatus from “Billions” starring in Edward Albee’s “The Goat,” and the blue-blooded Brit spoke about transforming into a red-blooded American.

“The irony is that, coming from a white-collar British background, I tend to play blue-collar Americans!” he laughed.

“So what do you understand about blue-collar Americans that allows you to do that?”

“There is a physicality, I think. There is a machismo about an American male who is robust, athletic, able to build things, and he takes care of stuff. And it’s a point of pride.”

But his ability to think, feel, or move like an American wouldn’t mean a thing if Lewis didn’t possess an almost freakish ability to sound American.

“It’s just finding a flavor, an intonation of an accent,” he said. “It’s often in a rhythm. It’s often a speed and you find those consistently, everybody immediately goes (snap), ‘Got him.’”

He demonstrated, saying “The rain in Spain falls mainly on the plain” in St. John’s Wood British, and then New York English.  “See, that’s more Bobby. That’s more Yonkers. There’s a bit of a bada-bing, bada-boom!”

A classically-trained Shakespearean actor, Lewis’ big break came during a Broadway production of “Hamlet” that Steven Spielberg happened to see in 1995. Four years later, when Tom Hanks and Spielberg were casting “Band of Brothers,” they flew Lewis to L.A. for a mindblower of an audition.

“Tom was in the middle of filming ‘Cast Away,’ so Tom was barely visible. He was just this big ball of hair at the other end of the room,” Lewis laughed. “Tom read all the parts. So I had a really fun hour. The casting director, said, ‘Well done, Damian.’ And I went out, and I got absolutely hammered to celebrate. I went to bed at 4:00 in the morning. And of course, I got a call at 8:00. ‘Steven Spielberg’s gonna come in and and see you with Tom.’ And I jumped in the shower, and sort of wept. They gave me the role that day: ‘’How would you like to go to boot camp in April?’”

While that lead to three Emmy and four Golden Globe nominations over the next 16 years, being one of his generation’s leading men on television doesn’t insulate him from “the question”:

“A journalist said to me, after I’d just accepted ‘Billions,’ he said, ‘Why did you take ‘Billions’? You didn’t need to.’ I think what she meant was that once you have a big hit on TV, then you can go and become a film star.”

At 46, Lewis may have the delicate balance of life just where he wants it, especially as his marriage has to accommodate not one but two A-List acting careers.  His wife, actress Helen McCrory, is Narcissa Malfoy in the Harry Potter series. They have two kids, a 10-year-old daughter and a nine-year-old son. So for Lewis, THE question is about something entirely different:

“You balance two big careers in your home; so how does this all work?”

“I can’t breathe!” Lewis laughed. “You’ve asked me the question, how do we balance it? People, I think, are a bit stupefied by the fact that I keep going backwards and forward to America. ‘Oh my God, how do you do it? It must be awful.’ But the truth is, the life I have at the moment, is sort of brilliant!”

Which means Damian Lewis is more than satisfied to keep his career focused on American TV -- and American voices.

Does he want grand-scale cinematic success, to be a movie star? “Sometimes you wake up thinking about that, thinking, ‘Oh, I wonder if I missed an opportunity to make big, big movies?’ You know, I made some big movies, and they have not always been the rewarding experience that making a big TV show at this particular time has been.”