To paraphrase Rodgers and Hammerstein there is NOTHING like a Dame . . . Edna! Our Russ Mitchell proves this with his Sunday Profile:

Her BBC talk show, "The Dame Edna Experience," had eight million viewers glued to their tellys on Saturday nights to watch her flirt with, insult, and occasionally eject her guests, celebrities (as Edna might say) slightly less famous . . . certainly less interesting and less glamorous . . . than she.

When Dame Edna's first Broadway show opened a decade ago, Americans fell in love with her, too.

"Do you live on an unpaved road?" she asked one audience member. "It looks like you tried to put your makeup on in the car."

Her latest foray onto the Great White Way, "All About Me," in which she shared the stage with singer Michael Feinstein, was not a hit. In fact, it's closing today after only a two-week run.

Last week, even after the bad news, Dame Edna graciously agreed to talk with us, about the show, her life and, of course, her celebrity.

"Everywhere I go, a little crowd gathers," she mused.

A little background: Edna Everage first came into public view more than fifty years ago in Australia, as a shy and rather shabby Melbourne housewife.

Without the makeup and the glasses, Edna is Barry Humphries . . . painter, writer, and collector of rare books. The bibliophile surmised that Edna's probably does not like to read, save for "The De Vinci Code."

He invented Edna as a university skit. To Humphries' surprise (and annoyance, he says), people loved Edna right from the start. 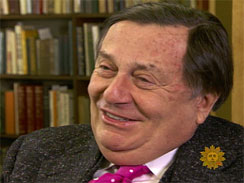 (CBS)
"I had no intention of being an actor," said Humphries (left). "I thought I was going to be a painter, or a lawyer, something like that. I drifted into the theater - I still do, every night I just drift into the theater. I drift across the stage and sometimes I say to the audience, 'I'm making this up as I go along.'

Over the years, the shy Melbourne housewife morphed into an international star, complete with a made-up life story so real that Dame Edna's autobiography became a best seller . . . on non-fiction lists.

The death of her fictional husband, Norm Everage, was even reported by a real BBC newscaster.

A grieving Edna told reporters that she missed her husband, "early on, you know, for the first couple of hours. But we made a wonderful monument for him in Australia. It's a marble prostate."

She told Mitchell that her husband suffered a "prostate murmur."

"I have never heard of that!" he said.

"Well, it's not a nice thing," Dame Edna said. "And it got louder as he got older. And the neighbors complained; they'd say, 'Would your husband please keep his prostate down?' And I would say to them, 'I'm sorry, there's no volume control on it. There's a knob, but I'm not touching that!'"

To hear Dame Edna tell it, Barry Humphries' story of her origins is a lie . . . concocted by an unscrupulous manager trying to take credit for her celebrity.

"He's a sad person, he's a failure," she said of the unfortunate Mr. Humphries. "And he resents the fact that I'm so popular. He couldn't do a lovely show that would run - well, in this case, days!"

It's an odd, sometimes dizzying game that has kept audiences off-balance for decades, a high wire act that Barry Humphries, married father of four, rarely talks about in public, preferring to carry on with his own interests, and let Dame Edna do the talking.

"Do you like Edna? Is she nice?" Mitchell asked.

"I've come around to her," he admitted. "She's not very nice, really."

"I was born nice," Dame Edna explained. "When I was born in Australia, my mother was laying in bed, pretty well exhausted - I was a big child - and she said, 'What is it?' And the nurse said, 'It's nice!'"

"What is fun, for a foreigner like me who loves the United States and everything about it, is to play around with your political correctness, because this new puritanism, you know, is so strong," said Humphries. "You're shockable! "Edna says what they dare not say. She speaks her mind. Her observations, very often quite prejudiced, are often quite acute."

"Does she ever go too far?" Mitchell asked.

"Always, but never to the point of alienating her audience, or hurting them."

"Barry, how much of you is in Edna, from a personality standpoint?"

"Almost nothing," he said.

"Really? Are you totally different people?"

"I'd like to think so. I don't have anything in common with her. I disagree with almost everything she says. I certainly couldn't stand on stage as myself for two hours every night, and talk to an audience."

But Dame Edna does. And sings and dances in high heels, as well!

She revels exuberantly in her outrageous celebrity, and the audience plays along. Barry Humphries does as well . . . a bit more reluctantly.

"Edna is so much more famous than you are," Mitchell said.

"Does that bother you at all?"

"Well, it does mean I have to mention her name if I want to get a good table in a restaurant!"