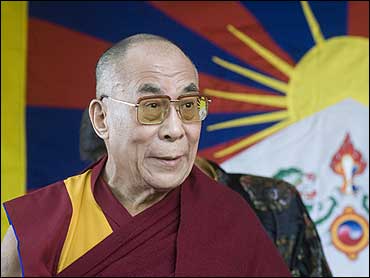 The Dalai Lama says China has launched a "brutal crackdown" in Tibet since protests shook the Himalayan region last year.

Tibetan culture and identity are "nearing extinction," he says in a speech, according to an advance copy released by his aides. "The Tibetan people are regarded like criminals, deserving to be put to death."

He was giving the speech to mark the 50th anniversary of the failed uprising that sent him into exile.

A peaceful commemoration last year by monks in Lhasa, Tibet's regional capital, erupted into anti-Chinese rioting four days later and spread to surrounding provinces - the most sustained and violent demonstrations by Tibetans in decades.

This year, chains of police checkpoints confront travelers to ethnically Tibetan areas - a quarter of Chinese territory that stretches from Tibet to parts of Qinghai, Sichuan and Gansu provinces. Convoys of armored vehicles and sandbagged sentry posts have turned the remote mountainous region into something of an armed camp. Police patrols have increased outside Buddhist monasteries.

Recent visitors to Lhasa have described armed police posted on rooftops. Local governments in Tibetan areas have ordered foreign tourists out, and foreign journalists have been detained and told to leave. Internet and text-messaging services, which helped spread word of last year's protests, have been unplugged in parts of the region.

"There won't be large-scale protests because the security situation in areas of Tibetan populations is very tight," said Dibyesh Anand, a Tibet expert at London's Westminster University. "Let's say there is a protest in a small town somewhere. How would we know? ... Even if there is a clampdown we will not find out."

Following protests last year in Tibet, China has stepped up its campaign to vilify the Dalai Lama, accusing him of leading a campaign to split the region from the rest of the country.

The Dalai Lama has denied the allegations, saying he is only seeking greater autonomy for the region to protect its unique Buddhist culture.

Early Monday, small bombs ripped the emergency lights and roofs off a police car and fire engine at a timber farm in a Tibetan area in Qinghai province, Xinhua said. No deaths were reported. A local official, surnamed Qi, confirmed the explosion.

It was unclear if the blasts were connected with tensions over the tight security, but they were made by "unsophisticated homemade explosives" and came hours after a clash between locals and police who were inspecting vehicles at the Makahe timber farm, Xinhua said.

In Aba, dozens of monks from Gomang monastery marched a week ago, shouting "Long live the Dalai Lama" and "We want human rights," to show support for a monk who had set himself ablaze at a nearby monastery to protest religious repression, according to accounts from Phayul.com, a Tibetan Web site, and Students for a Free Tibet.