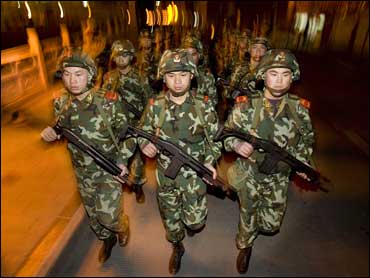 Authorities closed the last window into a restive Tibetan region in western China on Monday, tightening its security cordon on the eve of the 50th anniversary of the failed uprising that sent the Dalai Lama into exile.

Beijing is trying to head off trouble around March 10, which marks the start of the 1959 abortive Tibetan revolt against Chinese rule. A peaceful commemoration last year by monks in Lhasa, Tibet's regional capital, erupted into anti-Chinese rioting four days later and spread to surrounding provinces - the most sustained and violent demonstrations by Tibetans in decades.

This year, chains of police checkpoints confront travelers to ethnically Tibetan areas - a quarter of Chinese territory that stretches from Tibet to parts of Qinghai, Sichuan and Gansu provinces. Convoys of armored vehicles and sandbagged sentry posts have turned the remote mountainous region into something of an armed camp. Police patrols have increased outside Buddhist monasteries.

Recent visitors to Lhasa have described armed police posted on rooftops. Local governments in Tibetan areas have ordered foreign tourists out, and foreign journalists have been detained and told to leave. Internet and text-messaging services, which helped spread word of last year's protests, have been unplugged in parts of the region.

"There won't be large-scale protests because the security situation in areas of Tibetan populations is very tight," said Dibyesh Anand, a Tibet expert at London's Westminster University. "Let's say there is a protest in a small town somewhere. How would we know? ... Even if there is a clampdown we will not find out."

The Dalai Lama scheduled a speech Tuesday marking the 50th anniversary in the Indian hill town of Dharmsala where he is based.

His envoy, Kelsan Gyaltsen, said the situation in Tibet was "very, very distressing."

"At the moment, unfortunately, the Tibetan people inside Tibet are experiencing the harshest wave of repression since the days of the Cultural Revolution," he told reporters in Stockholm. "Tibet has become a giant prison, and at the moment nobody knows what is going on inside that prison."

"We would like to appeal to members of the international community to persuade the Chinese government to immediately open up Tibet, to allow international observers into Tibet."

In Sichuan's Ganzi prefecture, where some of the most violent protests occurred last year, officials said they received an emergency notice Monday from the provincial government, ordering foreigners - including reporters - out of Kangding. The town was the last corner of Ganzi, known for its strong sense of Tibetan identity, to remain open. 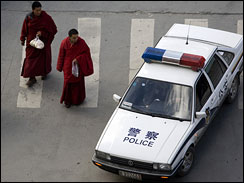 "There is a special situation and we hope you can leave as soon as possible," Zhang Lijuan of the Ganzi prefecture foreign affairs office told Associated Press reporters in Kangding. "Normally, this is an open place and we would welcome you. But because of this special situation, it's not convenient."

Zhang was careful not to mention the reason for the closure but said Kangding was also temporarily sealed off after last year's demonstrations. She said she did not know when the area would reopen.

The streets of Kangding, a valley town about 1,000 miles east of Lhasa, were busy Monday, though riot police and machine gun-toting soldiers now regularly march past the main square.

Hundreds of miles north, at the Rongwo monastery in the Qinghai town of Tongren, armed police patrolled in larger than usual numbers over the weekend, one Tibet-watching blog, High Peaks Pure Land, reported. The account was confirmed by a person at the Rebkong Arts Research Institute next to the monastery.

Rongwo is a historic center of Buddhist learning, and its monks protested last year. Buddhism lies at the heart of Tibetan identity, and monks are seen by many Tibetans as spiritual and community leaders.

Chinese President Hu Jintao said Tibet was basically stable and urged Tibetan politicians in Beijing to develop the region economically to tamp down on separatism.

"We should build a solid great wall to oppose the separatists, uphold the unity of the motherland and advance Tibet from basic stability to lasting stability," Hu said on state-run television.

In Beijing, a top police official said border controls in Tibet were tightened to prevent disruptions by supporters of the Dalai Lama, the Tibetan spiritual leader who is often demonized by Chinese leaders.

"We have made due deployment and tightened controls at border ports, and key areas and passages along the border in Tibet," Fu Hongyu, political commissar of the Ministry of Public Security Border Control Department, was quoted as saying by the official Xinhua News Agency.

Another Xinhua report described the success of a yearlong "legal education" at Tibet's monasteries, where more than 2,300 officials worked with monks and nuns after last year's uprising to "dissuade them from being duped by separatist forces and ensure the normal practice of Buddhism." 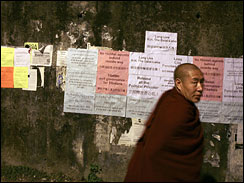 (AP Photo/Altaf Qadri)
(Left: An exile Tibetan Buddhist monk looks on as posters of the Tibetan movement are seen on a wall in Dharmsala, India, where the Dalai Lama lives in exile, March 9, 2009.)

Early Monday, small bombs ripped the emergency lights and roofs off a police car and fire engine at a timber farm in a Tibetan area in Qinghai province, Xinhua said. No deaths were reported. A local official, surnamed Qi, confirmed the explosion.

It was unclear if the blasts were connected with tensions over the tight security, but they were made by "unsophisticated homemade explosives" and came hours after a clash between locals and police who were inspecting vehicles at the Makahe timber farm, Xinhua said.

In Aba, dozens of monks from Gomang monastery marched a week ago, shouting "Long live the Dalai Lama" and "We want human rights," to show support for a monk who had set himself ablaze at a nearby monastery to protest religious repression, according to accounts from Phayul.com, a Tibetan Web site, and Students for a Free Tibet.
By Associated Press Writer Audra Ang; AP writers Anita Chang in Beijing, Malin Rising in Stockholm and Gavin Rabinowitz in Dharmsala contributed to this report