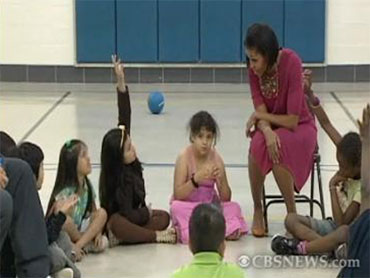 Seven-year-old Daisy Cuevas, thrilled to see herself on television with U.S. First Lady Michelle Obama, didn't quite understand the predicament in which she had innocently placed her undocumented Peruvian parents.

"She laughed, she jumped up and down. She was excited" after the encounter at Daisy's suburban Washington, D.C., elementary school, the girl's maternal grandfather, Genaro Juica, told The Associated Press.

The TV appearance made the pigtailed second grader a voice of the estimated 12 million immigrants living in the United States illegally - and a source of pride for Peru's president, who visits Washington on Tuesday.

"My mom says that Barack Obama is taking away everybody that doesn't have papers," Daisy told the U.S. first lady on May 19 at the New Hampshire Estates Elementary School in Silver Spring, Maryland.

"Well, that's something that we have to work on, right, to make sure that people can be here with the right kind of papers," Michelle Obama replied.

"But my mom doesn't have papers," said Daisy, a U.S. citizen by virtue of her birth.

The color immediately drained from her mother's face. She ran crying to call her parents in Lima, then went into hiding, fearful of being deported.

These are tense times for people like Daisy's mother, a maid who arrived in the United States with her carpenter husband when she was two months pregnant with Daisy.

Daisy's parents are fearful of U.S. anti-immigrant sentiment, which for many Latin Americans is epitomized by an Arizona law taking effect in July that gives police the right to demand ID papers of anyone suspected of being in the country illegally.

The U.S. Department of Homeland Security has said it is not pursuing Daisy's parents. Immigration investigations, it said in a statement, "are based on making sure the law is followed and not on a question-and-answer discussion in a classroom."

Nonetheless, Daisy's mother asked the AP after the May 19 incident not to name her or her husband.

And Juica, heeding an attorney's advice, asked the news agency not to take photographs of him or other relatives in Peru.

Daisy, meanwhile, has become a celebrity in Peru.

He said it would be scandalous if her parents were deported.

"Do you know how much President Obama and Mrs. Michelle Obama would stand to lose?" he said. Garcia called the Arizona law a "completely irrational response" to the illegal-immigration question, and said he would express his thoughts on the matter to President Obama during his visit to Washington.

An estimated 1.5 million Peruvians currently live in the U.S. Of those, three in five are either undocumented or in the process of legalizing their status, said Peru's consul-general in Washington, Cesar Augusto Jordan.

While Daisy has automatic U.S. citizenship and lives full time with her parents, her 9-year-old sister, July, has not been so lucky. July was left behind with her grandparents when her parents moved to the United States to escape poverty.

The two sisters met for the first time last year when Daisy spent a month visiting her grandparents in the working-class San Juan de Lurigancho district of Lima.

But July misses her parents, who are unlikely to visit Peru because of their illegal status in the U.S.

July has only seen them in photographs and in video chats with a webcam.