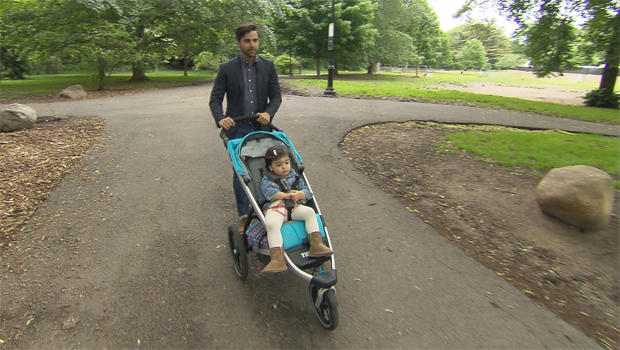 Don't let the sport coat fool you -- Simon Isaacs is ready for the playground. He's with his two-year-old daughter Kaia, selling imaginary tacos.

And while Simon's afternoon with her may not look like much, certainly no more than what many moms do every day, the 36-year-old entrepreneur sees it as a small act of revolution.

Dokoupil asked, "When you talk about a social movement, are we witnessing it right here? Two guys on a weekday in a playground?"

"You know, in itself, it's not a revolutionary act," Jacobs replied, only somewhat distracted by Kaia. "But the impact of all of it is revolutionary together -- guys involved in their kids' lives in a really deep way -- need help? -- who can only finish half-sentences, because that's what parenting is about."

Isaacs' other "baby" is a website. He's co-founder of Fatherly, a compendium of practical parenting advice aimed at America's biggest group of new dads: Millennials.

"The truth is, 80 percent of millennial dads, 80 percent of dads that were born after 1980, claim that they're the primary grocery shopper, which sort of blows people's minds when it comes to thinking about what is really happening around the household," he said.

Isaacs says today's new dads are different. Nearly two-thirds of households with kids have two working spouses, and as women have pushed into the workforce, dads have pushed onto the playground.

Or at least they've tried to. "The number one source of stress, it's basically understanding that we have to work no matter what," said young dad Jairo Meija. "I would love to spend more time with him and sometimes I can't."

A Boston College study out this week found most dads (66%) believe childcare should be evenly divided. But only about a third (29%) actually get there.

Trying to find that perfect equation generally means a lot more work at home for dads -- and advertisers have noticed, hailing dads as everyday heroes:

It's a portrayal of dad that's a little different from what we're used to. Think Homer Simpson, Al Bundy or Archie Bunker. For a long time, father didn't know best.

But real dads have come a very long way since 1966, when President Lyndon Johnson set aside the third Sunday in June for Father's Day, emphasizing dad's "strength and stability."

"A father would come home, read the newspaper, not pay much attention to the kids really, and still be considered a good father because he was making the family financially stable," said psychologist Ray Levy, who grew up in the 1950s, when dads were expected to be breadwinners and disciplinarians, but not much else.

"Nobody actually believed that fathers could be warm and soft. That was an unusual father," he said.

We know now kids that get time and attention from their fathers do better in school, on the job, and in their own relationships -- that's according to research that barely existed a generation ago.

"That's one of the reasons that we speak of fathers as having been the forgotten parent," said Levy. "Nobody did much research on fathers. It was all on mothers."

That's why Levy founded The Fatherhood Project, out of Harvard's Mass General Hospital. One current study: post-partum depression in men.

"Growing up in my household, like, you know, my dad giving me a hug and saying, 'I love you,' those things kind of really didn't happen that often," Dalzon said.

And though they still trail moms, fathers have nearly tripled the time they spend with their kids.

David Anchundia works nights, and then takes care of his daughter during the day.  "There are some days where I'm just, like, I'm beat, and where we're there playing, and we'll be playing on the floor, and then next thing I know she's like, 'Da-da, wake up!'" Anchundia laughed.

As an exercise, the guys try to imagine what their children will say about them in 20 years. Said Anchundia: "In 20 years, I hope she says that I was there for her, like, no matter how busy I got, no matter how tired I was. That I made time for her."

Of course, twenty years is a long time. So if you're lucky enough to have your dad around, whatever his age, now might be the moment to make some time for him.