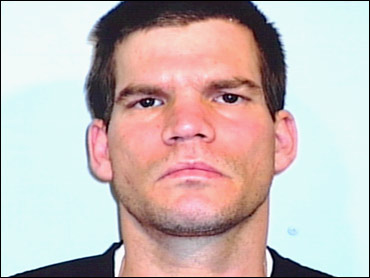 A man was arrested on murder charges Tuesday in the Mother's Day stabbings of his 8-year-old daughter and the little girl's best friend, who were killed after they went biking in a park.

Jerry Hobbs, who was recently released from prison, had led police to the bodies just off a wooded bike path early Monday, claiming he spotted them while searching for his daughter, the girl's grandfather, Arthur Hollabaugh, told The Associated Press.

Hobbs, 34, was questioned through the day about the deaths of Laura Hobbs, 8, and Krystal Tobias, 9.

Both girls had been beaten and stabbed repeatedly in the woods and left to die, Lake County Coroner Richard Keller said. The girls were found side-by-side and did not appear to have been sexually assaulted. They appeared to have been killed Sunday evening near the area where they were found, he said.

Lake County State's Attorney Michael Waller said in announcing the charges Tuesday that he could not discuss possible motives for the killings, but prosecutors said more details would come out when Hobbs appears in bond court Wednesday morning.

Authorities said Tuesday that additional charges could be filed, but they did not specify what they might be.

"This horrific crime has terrorized and traumatized the Zion community and I think it's safe to say people of good will everywhere," Waller said.

Outside the Tobias home, Krystal's 15-year-old brother, Albert, said he had never met Hobbs but knew Hobbs was searching with his own family the night his sister was killed.

"We never thought a father would do that to a daughter," Albert Tobias said. "They were just babies. They didn't do anything wrong."

In front of the Hollabaughs' house, "No Trespassing" and "Keep Out" signs printed in black and orange had been posted on a fence.

Hobbs has an extensive criminal history dating back to 1990 in Texas, including prior arrests for assault and resisting arrest, according to state Department of Public Safety records.

Before being released April 12, he had served two years in a Texas prison for chasing neighbors with a chain saw during an argument with Laura's mother, Sheila Hollabaugh, according to Wichita County, Texas, Assistant District Attorney Rick Mahler.

No one was hurt in the 2001 incident, and someone subdued Hobbs by hitting him in the back with a shovel, Mahler said. Hobbs was sentenced to 10 years of probation but failed to appear for required meetings, so his probation was revoked in 2003 and he was imprisoned.

Hobbs had been living with the Hollabaughs after his release, Arthur Hollabaugh said. He said he worried authorities might be trying to railroad Hobbs in their search for the girls' killer.

"Jerry just got out of prison for aggravated assault, and I think they're holding that against him," Hollabaugh said. "I don't think he did it."

Hollabaugh said authorities confiscated clothes and a computer from the house.

He described the search for his missing granddaughter and said the two men were in the woods shortly before dawn Monday when they spotted Laura's bike part way down a ravine in the brush.

Minutes later, he said, Hobbs was screaming that he had found the bodies.

"I went and I seen them from a distance," Hollabaugh said. "It was clear they were laying there."

On Tuesday, grief counselors were brought to Beulah Park Elementary, where the girls were best friends in the same second grade class. A memorial of flowers and balloons marked the area of the nearby park where the bodies were found a day earlier.

"We will be monitoring the students," Zion Schools Supt. Connie Collins said on CBS News'The Early Show. "There will be a time that they will be able to interact with others if they need assistance beyond what the school can provide. We have community resources as well as faith-based organizations that are ready to step up and assist in any way possible."

Zion, along Lake Michigan, was founded in 1901 by a religious faith healer who hoped it would be a utopian community. It has about 22,000 residents but retains a quiet, at times rural feeling despite being on the edge of both the Chicago and Milwaukee metropolitan areas.