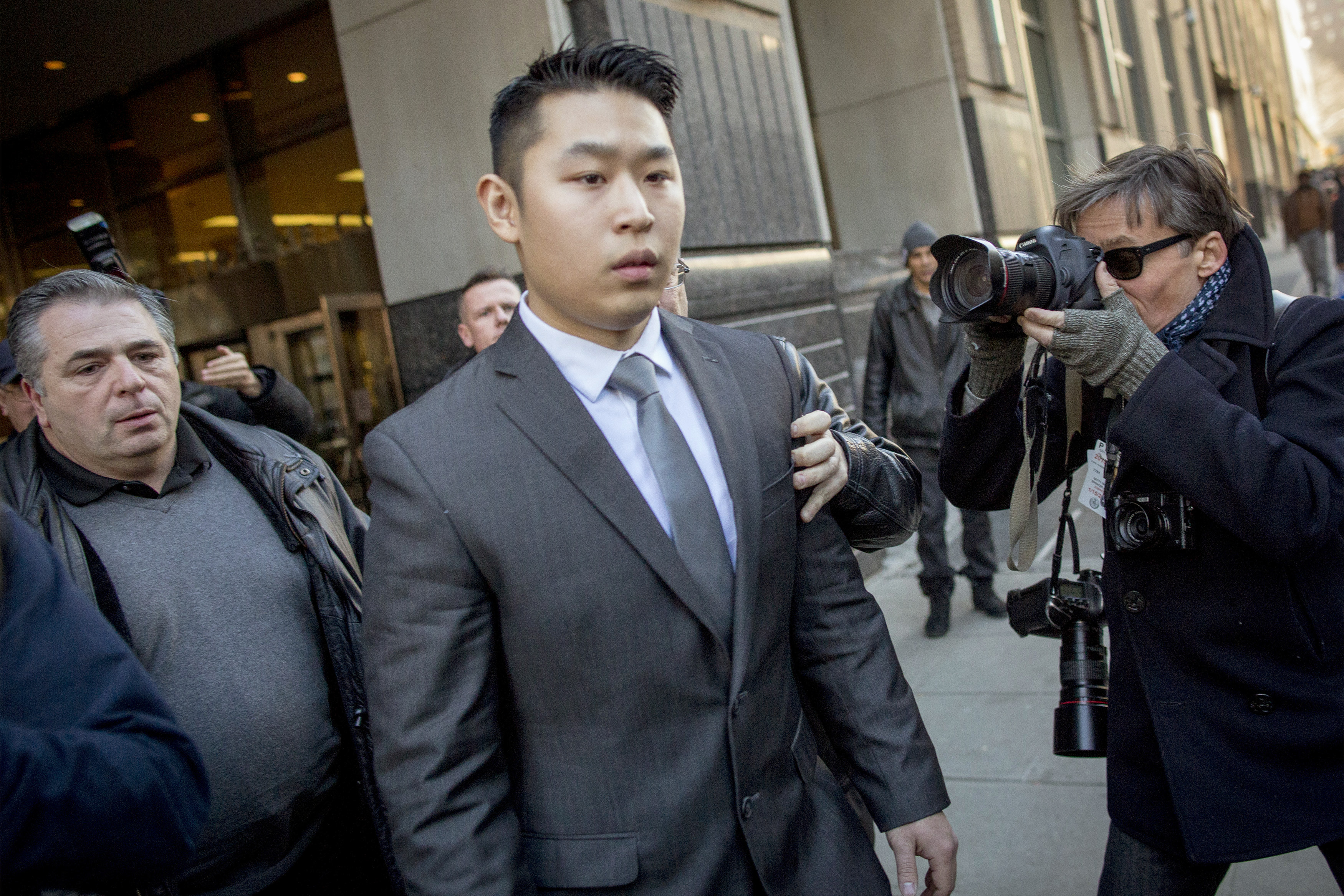 NEW YORK -- A prosecutor said Wednesday he has recommended that the New York police officer who shot and killed an unarmed man in a darkened public housing stairwell serve no time behind bars.

As CBS New York reported, Peter Liang and his partner were performing a vertical patrol on the stairs in a Pink Houses building on Nov. 20, 2014. Liang's gun went off in an unlit stairwell, and a bullet struck a wall, ricocheted, and hit Akai Gurley in the chest, killing him.

"Because his incarceration is not necessary to protect the public, and due to the unique circumstances of this case, a prison sentence is not warranted," Thompson said in a news release announcing his recommendation.

The 28-year-old Liang was convicted of a manslaughter charge in February after the 2014 shooting death of Gurley. The rookie officer was dismissed following the verdict.

Thompson said Wednesday he has recommended a judge sentence Liang to serve five years' probation, along with six months of home confinement and 500 hours of community service. Though the charge carries no requirement for prison time, Liang faced up to 15 years in prison.

Thompson also emphasized that "there are no winners" in the case, which attracted widespread attention and aroused strong emotions in several New York City communities, CBS New York reported.

Liang had been patrolling at the public housing high-rise with his gun drawn when he said a sudden sound jarred him and he fired. The bullet ricocheted off a wall and hit the 28-year-old Gurley on a lower floor.

Prosecutors argued Liang's actions were reckless and he shouldn't have had his gun out. Liang's attorney had argued that Gurley's death was tragic, but was not a crime.

Thompson said there was no evidence that Liang had any intention to hurt or kill Gurley and that his character must also be considered.

"Mr. Liang has no prior criminal history and poses no future threat to public safety," he said.

Scott Rynecki, an attorney representing Gurley's family, said he was pleased the district attorney had obtained a conviction in the case and that the conviction helped to hold police officers accountable for their actions. He said Gurley's family would "continue to have faith in our system of justice."

Gurley's family said they were "outraged" by the recommendation and would implore state Supreme Court Justice Danny Chun to ignore it and sentence Liang to time in prison at a court proceeding next month.

"Peter Liang has not served a single day in jail, and he must be held accountable," Gurley's family said in a statement. "The district attorney's inadequate recommendation diminishes what Peter Liang did. It diminishes Akai's death."

Liang is the first New York City police officer convicted in an on-duty death since 2005.

Loyda Colon, the co-director of civil rights group the Justice Committee, said Thompson's recommendation would be an injustice to Gurley's family.

"These are criminal actions, for which Liang should be held accountable," she said. "We call on Judge Chun not to replicate DA Thompson's failure and instead hand down a sentence fitting with Liang's crime that includes prison time."

While Chun does not need to follow Thompson's proposal at Liang's sentencing proceeding next month, sentencing recommendations from prosecutors typically hold significant weight in most criminal cases.

The shooting happened in a year of debate nationwide about police killings of black men. Activists have looked to Liang's trial as a counterweight to cases in which grand juries have declined to indict officers, including the cases of Michael Brown in Missouri and Eric Garner in New York. Like Gurley, Brown and Garner were black and unarmed. Liang is Chinese-American.

More than 10,000 of Liang's supporters railed in New York and across the U.S. after the verdict, protesting his conviction.