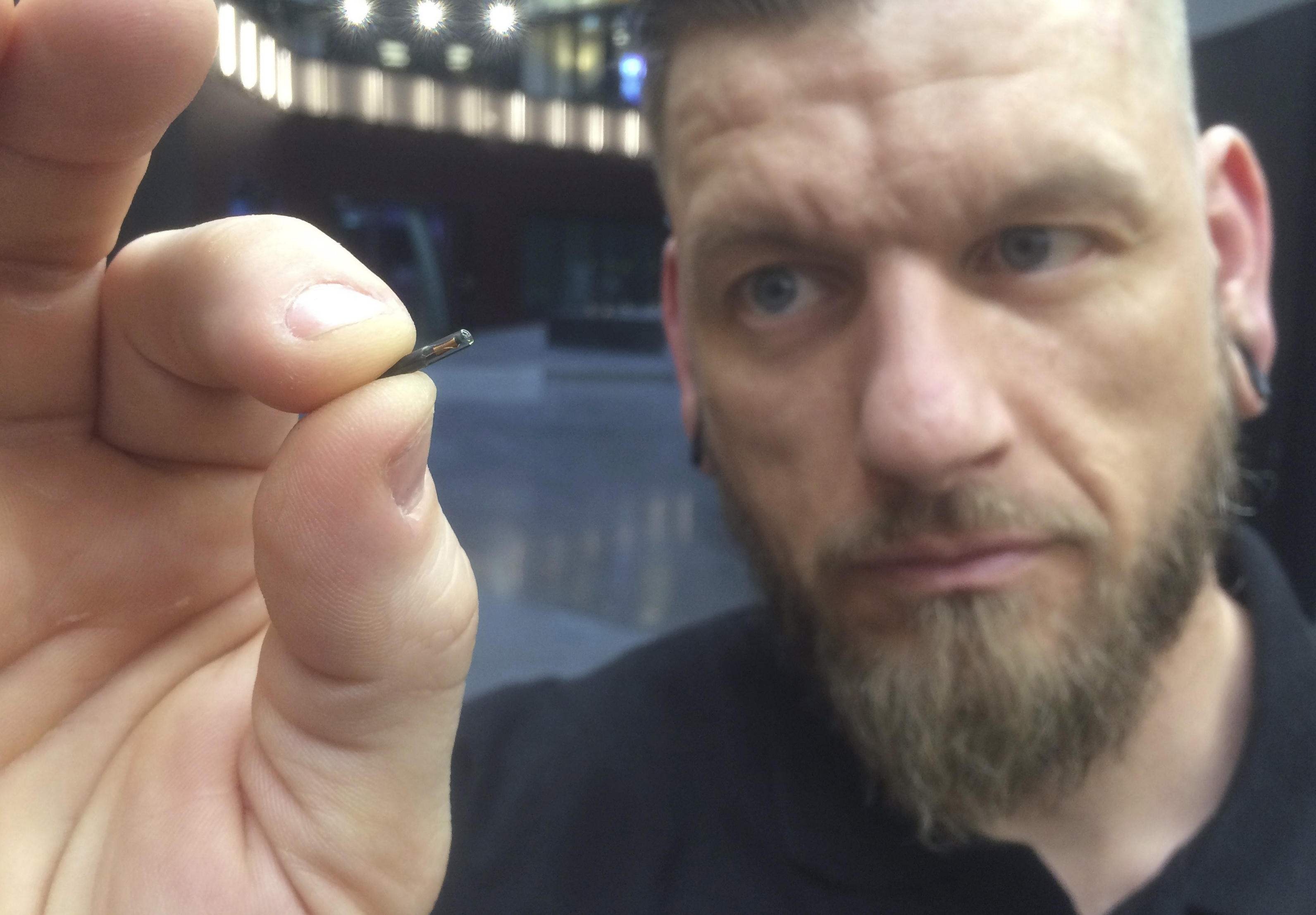 STOCKHOLM -- The syringe slides in between the thumb and index finger. Then, with a click, a microchip is injected in the employee’s hand. Another “cyborg” is created.

What could pass for a dystopian vision of the workplace is almost routine at the Swedish startup hub Epicenter. The company offers to implant its workers and startup members with microchips the size of grains of rice that function as swipe cards: to open doors, operate printers, or buy smoothies with a wave of the hand.

The injections have become so popular that workers at Epicenter hold parties for those willing to get implanted.

“The biggest benefit I think is convenience,” said Patrick Mesterton, co-founder and CEO of Epicenter. As a demonstration, he unlocks a door by merely waving near it. “It basically replaces a lot of things you have, other communication devices, whether it be credit cards or keys.”

The technology in itself is not new. Such chips are used as virtual collar plates for pets. Companies use them to track deliveries. It’s just never been used to tag employees on a broad scale before. Epicenter and a handful of other companies are the first to make chip implants broadly available.

And as with most new technologies, it raises security and privacy issues. While biologically safe, the data generated by the chips can show how often an employee comes to work or what they buy. Unlike company swipe cards or smartphones, which can generate the same data, a person cannot easily separate themselves from the chip.

“Of course, putting things into your body is quite a big step to do and it was even for me at first,” said Mesterton, remembering how he initially had had doubts.

“But then on the other hand, I mean, people have been implanting things into their body, like pacemakers and stuff to control your heart,” he said. “That’s a way, way more serious thing than having a small chip that can actually communicate with devices.”

Epicenter, which is home to more than 100 companies and some 2,000 workers, began implanting workers in January 2015. Now, about 150 workers have them. A company based in Belgium also offers its employees such implants, and there are isolated cases around the world where tech enthusiasts have tried this out in recent years.

The small implants use Near Field Communication (NFC) technology, the same as in contactless credit cards or mobile payments. When activated by a reader a few centimeters (inches) away, a small amount of data flows between the two devices via electromagnetic waves. The implants are “passive,” meaning they contain information that other devices can read, but cannot read information themselves.

Libberton said that if such data is collected, the big question remains of what happens to it, who uses it, and for what purpose.

So far, Epicenter’s group of cyborgs doesn’t seem too concerned.

“People ask me, ‘Are you chipped?’ and I say, ‘Yes, why not,’” said Fredric Kaijser, 47, the chief experience officer at Epicenter. “And they all get excited about privacy issues and what that means and so forth. And for me it’s just a matter of I like to try new things and just see it as more of an enabler and what that would bring into the future.”

The implants have become so popular that Epicenter workers stage monthly events where attendees have the option of being “chipped” for free.

That means visits from self-described “body hacker” Jowan Osterlund from Biohax Sweden who performs the “operation.”

He injects the implants — using pre-loaded syringes — into the fleshy area of the hand, just next to the thumb. The process lasts a few seconds, and more often than not there are no screams and barely a drop of blood. “The next step for electronics is to move into the body,” he says.

Sandra Haglof, 25, who works for Eventomatic, an events company that works with Epicenter, has had three piercings before, and her left hand barely shakes as Osterlund injects the small chip.

“I want to be part of the future,” she laughs.