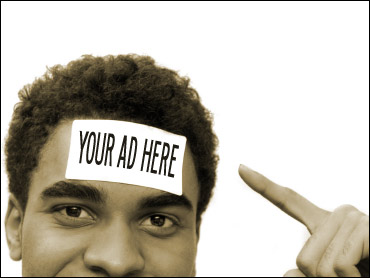 Advertising used to be so much easier: simply a catchy jingle or a clever slogan. Sunday Morning correspondent Elizabeth Kaledin found that the 30-second spot was the best game in town for selling a product for etching brand names into the American consumer conscience.

In the golden age of television, an ad on one of the big three networks could reach 70 percent of the viewing audience. But then the landscape changed: along came cable digital video recorders like Tivo, which allow viewers to fast forward through ads with the click of a remote. The viewing audience became not only scattered and fractured but in control -- a horrifying reality to Madison Avenue.

"I mean, we're in a period now where consumers are in control of their media truly and it's not just television," Joe Mandese, editor-in-chief of Media Post, said. "It's everywhere and I think that's really challenging Madison Avenue and advertisers and agencies to find new ways of breaking through to connect with people."

To do that, Mandese, who has been tracking the advertising world for 25 years, says advertisers today are scrambling to hunt down their once captive audience wherever they can find them.

Since people are spending more time away from home, marketers are spending more money on bringing TV to you: in shopping malls and in grocery stores. There's even an Autonet in auto repair shops, and of course, advertising reaches people on computers and movie screens.

"There's more media than ever before," Mandese said. "Media is being spawned every second. I mean literally, by the time I finish saying this sentence, there'll be a new media platform created"

To reach people, advertisers have had to get much more creative digitally inserting virtual products within shows and even video games -- making them part of the entertainment instead of a break from the entertainment.

"Advertisers like our products because they give 'em a chance to get into the programming itself, into the sports program," said Hank Adams, CEO of Sportsvision, a company that has pioneered the art of placing ads on America's playing fields.

Using Sportsvision technology, people in the stands see the unadorned wall, while people at home see another.

"Because we do it technologically – digitally -- we make that sign very bright, very visible," Adams said.

Sportsvision can run about 18 ads in the course of a baseball game but the company tries hard not to run interference.

The danger of offending the viewer is where advertisers in the modern age run into trouble: in a desperate attempt to grab the consumers' attention, advertisers are creating what is known as ad clutter.

"It seems like the goal of most marketers and advertisers nowadays is to cover every blank space with some kind of brand logo or a promotion or an advertisement," Walker-Smith said.

Marketers have found a way to use parking stripes, postage stamps and floors, even buses and buildings, like a target ad which practically engulfs an entire New York city block. Walker-Smith says it's all an assault on the senses.

"We have to screen it out because we simply can't absorb that much information. We can't process that much data," he said, "and so no surprise, consumers are reacting negatively to the kind of marketing blitz; the kind of super saturation of advertising that they're exposed to on a daily basis."

The conundrum for modern day marketers is how to cut through the clutter without alienating the consumer.

"All of this marketing saturation that's going on is creating this kind of arms race between marketers where they have to up the ante the next time out because their competitors have upped the ante the last time they were out," Walker-Smith said. "And the only way you can win is to have more saturation -- be more creative; be more outrageous."

One company called Submedia has literally gone underground to find its audience. Submedia places ads in tunnels in subway and metro systems around the world. Using technology borrowed from that old fashioned toy called a zoetrope, Submedia creates ads that come to life with the movement of the train.

"With us its one ad in the tunnel," Peter Corrigan, the CEO of Submedia, said. "Everyone on that train gets to see that ad. So we're not competing with other forms of advertising in that space. So that's how we manage to cut through the clutter. You're riding the train and all of a sudden …Pop! This pops out at you."

Corrigan also said that ads need to be entertaining to be effective, an idea echoed by analysts and even regular people who are advertising's targets. Ads work because they entertain: engaging their audience without a full frontal assault.

"It's a very creative concept and advertisers like to reach the consumer in a way that doesn't feel like an ad," Corrigan said. "And that's what we are doing."

According to Mandese, engaging the audience with the product is "the mantra. That is the Holy Grail."

Other attempts to crack the market involve novelties: CBS is promoting its fall programming on eggs -- 35 million of them to be exact. Another company called Wizmark is breaking the bathroom barrier. It sells ad space in urinals.

"Everybody will remember the ad they see in a Wizmark," Richard Deutch, CEO of Wizmark said. "Advertising in the bathroom provides the quintessential captive audience. You can't look left. You can't look right. You have to look at the ad and listen to it."

Some might ask, "Have we gone too far? Where does it end if our breakfasts and our bathrooms are now ad space for sale?" Companies are appearing increasingly desperate to make their mark anywhere.

But ad analysts say consumers have control of more than just the Tivo remote ads do have the power to sell, but not if they turn people off.

"Ultimately, the consumer is the judge," Mandese said, "if the marketer that's using eggs this season doesn't have a great record with eggs chances are they won't be using eggs gain, okay?"

"We need advertising," Walker-Smith said. "We want advertising and we like advertising. Consumers don't hate advertising. What they hate is bad advertising. So I think the challenge that's facing the industry nowadays is how to quit doing all the bad stuff that creates the kind of environment people are resisting and figure out ways to engage people in ways that they find to be informative and entertaining. And that's become our challenge in this super saturated world."

Richard Drew on photographing the "Falling Man" on 9/11
Thanks for reading CBS NEWS.
Create your free account or log in
for more features.
View CBS News In
CBS News App Open
Chrome Safari Continue
Be the first to know
Get browser notifications for breaking news, live events, and exclusive reporting.