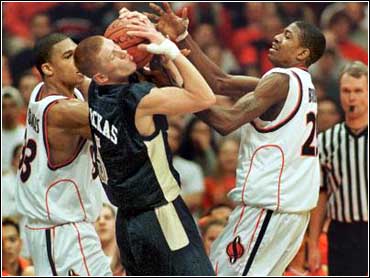 The return of Syracuse's outside shooting meant a big game inside for Etan Thomas.

The senior center had 21 points, 13 rebounds and nine blocked shots to help No. 9 Syracuse pull away from Pittsburgh in the second half for an 83-62 victory Wednesday night.

The Orangemen had to withstand the one-man onslaught of Pitt's Ricardo Greer, who scored a career-high 33 points.

"It was a little easier inside tonight. That's because we finally hit some outside shots," said Thomas, whose nine blocked shots matched his career best for a third time.

"When were hitting the outside shot people have to play more man against us. I like that."

After enduring a long-range shooting slump over their last eight games, the Orangemen went 6-of-17 from 3-point range against Pitt, including Shumpert's 3-of-7. While Syracuse wasn't exactly blazing away, the Orangemen hit enough to keep the Panthers from collapsing on Thomas.

Meanwhile, Syracuse had no answer for Greer, whose 33 points were the most by a player this season against Syracuse.

"We didn't do a very good job on him," Thomas said. "When one guy is doing all the scoring, you have to find him."

"I just tried to come out aggressive and help my team start off on the right foot," said Greer, whose previous high was 29 points this season against Norfolk State. "I think we wore down in the last 10 minutes of the game. Syracuse was just bigger and stronger."

"We haven't been getting after people like we did in the beginning of the year," Shumpert said. "We got it going again in the second half and broke the game open."

Damone Brown added 11 points and nine rebounds for Syracuse, which defeated Pitt for the second time this season. Syracuse beat Pitt 82-72 last month but had to be rescued by reserve freshman DeShaun Williams, who scored a career-high 23 points.

Greer scored 20 points in the first half as Syracuse struggled to a 33-29 lead.

The Panthers with just eight players on the bench because of a rash of suspensions, injuries and academic problems.

Pitt also played without coach Ben Howland, who was in California for his father's emergency heart surgery. Assistant Jamie Dixon took over the team in his absence.