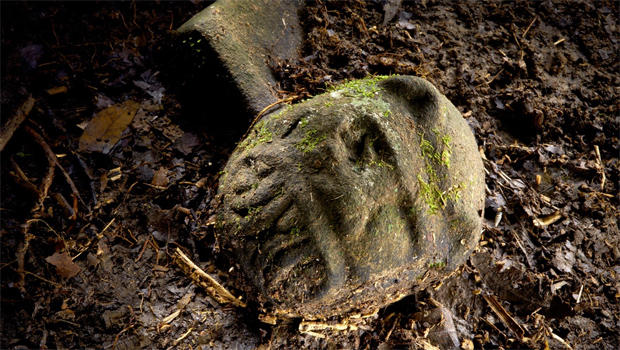 Who’s afraid of the CURSE OF THE LOST CITY? Certainly not the explorers who’ve been reliving their adventures -- and misadventures -- with our Lee Cowan:

If you ask bestselling author Doug Preston, he’ll say he doesn’t believe in curses. And yet, here he is, being treated for an illness he contracted while on a jungle expedition to a site rumored for centuries to rain misfortune down on anyone who entered.

“I would never trade that experience for anything,” he said. “It was so powerful.”

His tale begins in the rain forests of Mosquitia -- carpeting some 20,000 square miles of Honduras and Nicaragua.

“The legend is there was a great city in the mountains that was struck by a series of catastrophes, and the inhabitants thought the gods were angry at them, and [they] left, leaving all their belongings behind,” Preston said.

Some called it the White City, others the City of the Monkey God.

Its possible existence has tantalized adventure seekers since the 1500s, including explorer Steve Elkins, who’d been obsessed with finding the city since the early ‘90s.

“Who doesn’t like a story that has some mystery in it?” Elkins said. “So let’s go and see what happens!”

He launched his latest expedition in 2012, and invited Preston to document it.

“Look, I thought Steve’s never going to find a lost city -- that’s ridiculous,” Preston said. “But, you know, who knows? Even if he doesn’t find anything, it might make a good story.”

But this time Elkins had something no previous expeditions to the area did: a piece of impressive technology called LIDAR, a laser mapping system. Peering through a hole cut in the bottom of an old Cessna Skymaster, it could scan hundreds of square miles of dense jungle in a matter of days.

The problem? It was expensive, and Elkins needed a backer.

Enter documentary filmmaker Bill Benenson, who agreed to foot the million-dollar-plus bill if he could capture the adventure on film.

“This technology could see through the jungle canopy and potentially reveal the contours of what might be underneath it,” Benenson said. “It seemed like a valuable gamble.”

A gamble that soon paid off. What the LIDAR revealed -- once that jungle canopy was removed -- shocked everyone on the team.

The LIDAR made visible what looked like rectangular structures, including two perfectly linear lines, and a right angle.

“They were either man-made or the world’s most intelligent gophers were out there, doing things they’d never done before,” Benenson said.

“So what do you think you had found, initially?” Cowan asked.

“Well, I knew we found a city, an ancient city,” Elkins said. “That I knew. But what it was, beyond that, that was up to the archeologists to figure out.”

Was it a big deal? “Well, I think it is. Is it like Machu Picchu? No. But for this area, regionally, I think it’s very, very important.”

He helped National Geographic artists come up with a rendering of what the city might have looked like -- but he had to get there on foot to know for sure.

“Just to get into this jungle is extremely dangerous,” Elkins said. “And once you’re there, it’s thick, thick with poisonous snakes.”

The deadliest? A pit viper called the fer de lance. Docile enough during the day, but when one slithered into camp under the cover of darkness, it caused an understandable panic.

On the team, a jungle warfare expert leapt into action.

The next morning the jungle seemed a little less ominous, and the march to the site began. It was like cutting your way through a shag carpet. What wasn’t growing, was oozing with mud.

The jungle was so thick, all they could see were leaves -- even when standing right in front of what Chris Fisher thought was a pyramid. “Can’t say I see a whole lot from here,” one team member said. “Well, that’s what it is. It’s a pyramid. It’s made out of earth,” said Fisher.

There were no stone structures to speak of, just foundations. But the next day -- almost by accident -- disappointment turned to jubilation, when they found carved inscriptions.

“Someone said, ‘Hey, wait a minute, there’s some weird stones over here,’” Elkins said. “And we all came back and the first thing I saw was a jaguar head coming out of the ground, carved in stone, snarling.”

There at their feet was a trove of artifacts believed to date from the 16th century -- the personal belongings of the inhabitants who, as one theory would have it, fled the city in a desperate attempt to escape European disease and slavery.

“It was phenomenal to think that in the 21st century you could still find something like this on the surface of the Earth,” Elkins said.

Some in the academic community, however, were not so easily impressed.

Rosemary Joyce, a professor of anthropology at UC Berkeley, said an expedition lead by filmmakers reeks more of Indiana Jones than it does real science -- and some 20 other archaeologists agreed.

Some indigenous people bristled when the Honduran President removed the first artifact himself. They consider the site sacred, and said it should be left alone.  In the end, what this expedition unearthed was more than just relics; it became a stew of excitement, questions, criticism, and ill health.

Months after leaving the jungle, Doug Preston noticed a bite from a sand fly that just wouldn’t heal. So did Chris Fisher.

The National Institutes of Health diagnosed it as frightening parasitic disease called Leishmaniasis.

“The parasite migrates to the mucous membranes of your mouth and your nose, and basically eats them away,” Preston said. “Your nose falls off, your lips fall off, and eventually your face becomes a gigantic, open sore.”

Over the next few months, about half the expedition came down with the early symptoms, and had to undergo the painful treatment.

Bill Benenson and Steve Elkins were spared, and their documentary about their adventure is now in its final edit.

As for the site, only a fraction of it has been excavated, and questions linger about how -- or if -- to go back again.

“It’s just too dangerous,” Preston said. “And just getting in and out is dangerous.”

It would seem the jungle is still fighting to keep its secrets -- an almost impenetrable veil making a better accounting of what’s really there difficult at best.

And THAT, in the end, may be the most lasting curse of all.

Unraveling the disappearance of Michael Rockefeller