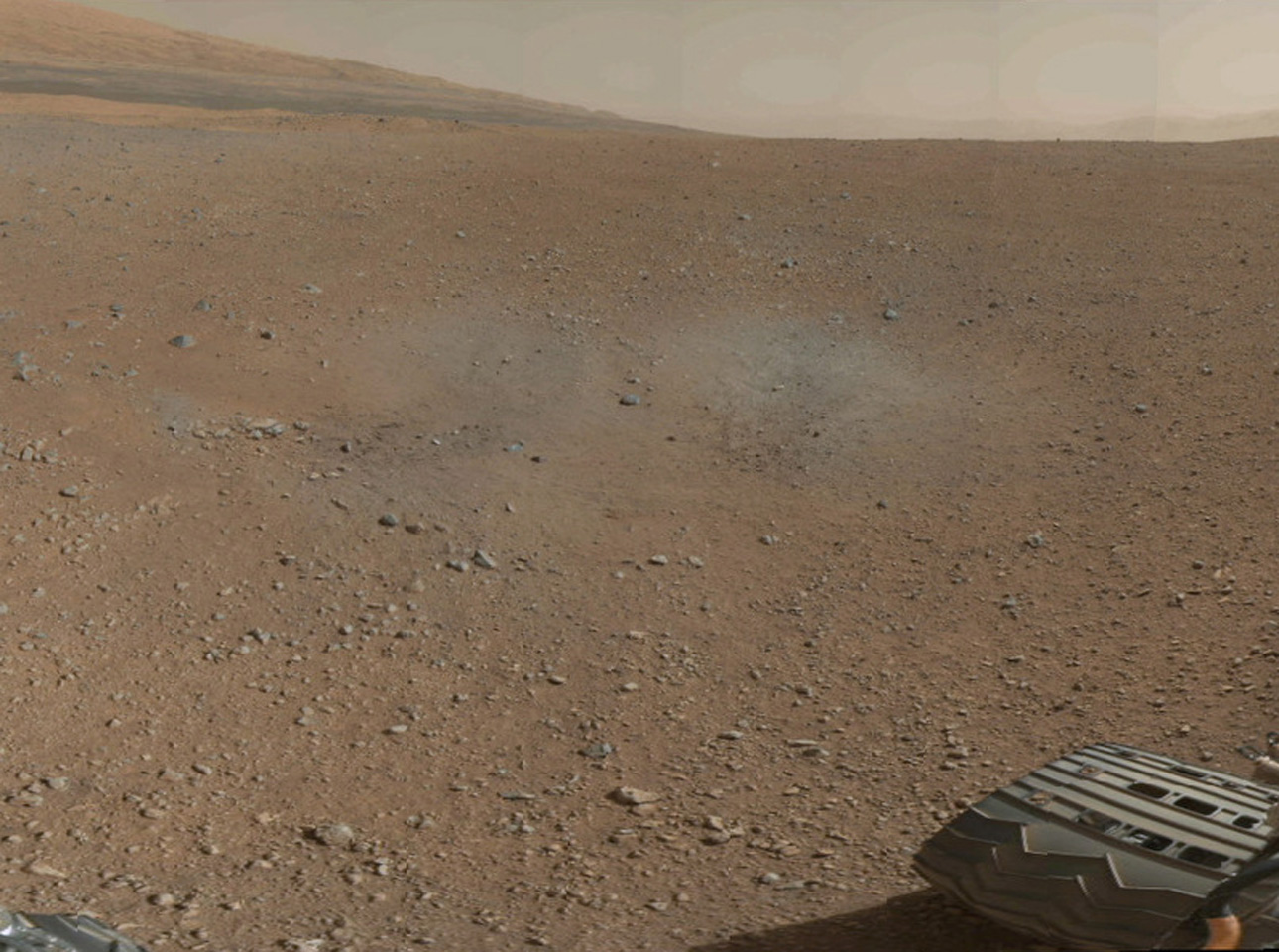 PASADENA, Calif. (AP) - The Curiosity rover has returned another postcard from Mars — the first 360-degree color view from Gale Crater.

Since landing Sunday night for a two-year mission, NASA's six-wheel rover has been sending home a trickle of pictures, beginning with grainy, black-and-white photos. It also beamed back a low-quality video showing the last few minutes of its descent to the surface.

It recently raised its mast containing high-resolution and navigation cameras that have given scientists a better view of the landing site. NASA released the panoramic photo a Thursday.

On Wednesday, scientists said the ancient Martian crater where the Curiosity rover landed looks strikingly similar to the Mojave Desert in California with its looming mountains and hanging haze.

"The first impression that you get is how Earth-like this seems looking at that landscape," said chief scientist John Grotzinger of the California Institute of Technology.

In other new photos, Curiosity looked out toward the northern horizon. Nearby were scour marks in the surface blasted by thrusters, which kicked up a swirl of dust. There were concerns that Curiosity got dusty, but scientists said that was not the case.

"We do see a thin coating of dust, but nothing too bad," said Justin Maki, imaging scientist at NASA's Jet Propulsion Laboratory, which manages the $2.5 billion mission.

Scientists were giddy about the scour marks because they exposed bedrock below - information that should help them better understand the landing site.

Since landing, Curiosity has zipped home a stream of low-resolution pictures taken by tiny cameras under the chassis and a camera at the end of its robotic arm, which remained stowed. It also sent back a low-quality video showing the last 2 1/2 minutes of its descent.

The rover successfully raised its mast packed with high-resolution and navigation cameras. With the mast up, it can begin its shutterbug days in force, including taking a 360-degree color view of its surroundings as early as Thursday.

Grotzinger said he was struck by the Martian landscape, which appeared diverse. There seemed to be harder material underneath the gravelly surface, he said.

"It kind of makes you feel at home," he said. "We're looking at a place that feels really comfortable."

Mars, of course, is very different from Earth. It's a frigid desert constantly bombarded by radiation. There are geological signs that it was a warmer and wetter place once upon a time. One of the mission's goals is to figure out how Mars transformed.

After sailing 352 million miles and eight months, Curiosity parked its six wheels near the Martian equator, where it will spend the next two years poking into rocks and soil in search of the chemical ingredients of life. It is the most expensive and ambitious mission yet to Mars.

Its ultimate destination is a mountain towering from the center of the crater floor. Preliminary estimates indicate Curiosity landed four miles away from the base of Mount Sharp, thought to contain intriguing signs of past water - a starting point to learning whether microbial life could exist.

Before the 1-ton, nuclear-powered Curiosity can start roving, it has to undergo several weeks of tedious but essential health checks.

Since it was too heavy to land using traditional air bags, it used a heat shield, parachute, rockets and cables. An orbiting spacecraft spotted the discarded spacecraft hardware, including the ballast weights that were shed soon after entry into the atmosphere.