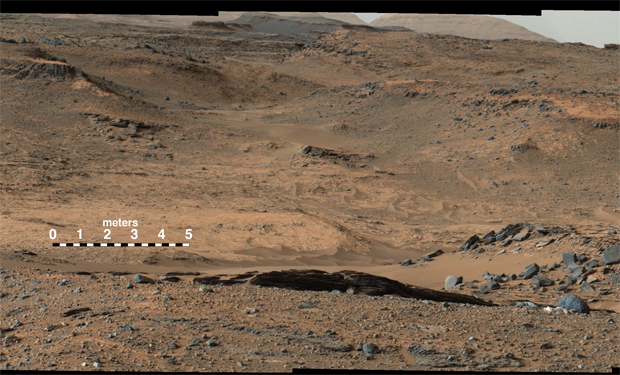 Responding to criticism from a review panel that questioned the science agenda of NASA's Curiosity Mars rover, senior managers Thursday defended the $2.5 billion mission, saying the spacecraft had more than achieved its primary science goals and is moving into an extended mission that promises to shed even more light on the red planet's history and evolution.

Two years after a dramatic "sky crane" landing in Gale Crater, the nuclear-powered rover has finally reached the base of Mount Sharp, a towering mound of layered terrain at the heart of the crater that serves as a time capsule of sorts, a rock record that may explain what turned a once-habitable environment into the cold, arid wasteland seen today.

Unveiling a revised extended mission plan that includes a shortcut to intriguing formations at the base of Mount Sharp, Jim Green, director of planetary science at NASA Headquarters, stoutly defended the plan, saying Curiosity was an unqualified success under the leadership of Project Scientist John Grotzinger.

"In August 2012, Curiosity landed in Gale Crater and immediately hit the jackpot," Green said. "Within easy reach of the landing area, Curiosity explored (an area known as) Yellowknife Bay and found it was an ancient lakebed environment that several billion years ago offered fresh water, all of the key ingredients of life and a chemical source of energy for microbes if, indeed, any existed at that time."

Since then, he said, "Curiosity has made steady progress toward Mount Sharp, overcoming many challenges along the way."

"Mount Sharp offers a series of geological layers that have recorded different chapters in the environmental evolution of early Mars," Green said. "We are here today to tell everyone that the next phase of research on Mars for Curiosity can now begin. We are at the base of Mount Sharp."

Said Grotzinger: "We have finally arrived at the far frontier that we have sought for so long."

"The landing site at Gale Crater was selected as what's called a go-to site, which means that you land, you accept the risk you have to drive some significant distance ... to arrive at a place where the core of the science mission really begins."

Including the detour to Yellowknife Bay and other targets of opportunity, it took Curiosity two full years -- the duration of its primary mission -- to reach the base of Mount Sharp. To no one's surprise, NASA recently granted Curiosity a two-year mission extension, pending congressional approval, setting aside $59.4 million in the agency's 2015 budget.

But NASA's Planetary Senior Review panel, charged with evaluating seven ongoing planetary missions to determine whether they justified additional funding for extended research, ranked Curiosity at the bottom of its list, classifying the proposed research as very good/good -- a less than enthusiastic endorsement for a so-called "flagship" mission with a $2.5 billion price tag.

The review panel was surprisingly frank in its evaluation of the science proposed for the extended mission, listing six "significant problems" that panel members said needed to be addressed.

"The proposal lacked specific scientific questions to be answered, testable hypotheses, and proposed measurements and assessment of uncertainties and limitations," the panel observed in a letter to Green.

Even worse, "it was unclear from both the proposal and presentation that the Prime Mission science goals had been met. In fact, it was unclear what exactly these were. Upon detailed questioning, the team noted that the Level 1 requirements were actually engineering capability requirements with which the mission launched and are not reflective of the state of fulfilling mission success criteria, which were not addressed quantitatively."

Without naming names, the panel also was critical of Grotzinger because he did not attend the review sessions in person to answer specific question.

"Additionally, he was not present for the second round of Curiosity questions from the panel," the panel said. "This left the panel with the impression that the team felt they were too big to fail and that simply having someone show up would suffice."

The panel's report, authored by Clive Neal, professor of engineering and Earth sciences at the University of Notre Dame, said the 15-member committee "strongly urges NASA HQ to get the Curiosity team focused on maximizing high-quality science that justifies the capabilities of and capital investment in Curiosity."

Green said Thursday that Grotzinger did not attend the review sessions because of prior commitments approved by NASA, describing that criticism as a "misunderstanding." And Green complained that reporters focusing on the panel's negative observations had ignored the "top recommendation" of the senior review.

"So let me quote what that is," he said. "They stated to me, in writing, the science value or science per dollar of the extended missions ... exceeds the science gained from any planned mission and all have important strengths. That is, they all represent added value to the planetary science mission and the American taxpayer because they are essentially new missions without development and launch costs. End quote."

Grotzinger did not criticize the review panel's conclusions, only saying that with Curiosity's arrival at Mount Sharp, many, if not all, of the concerns will be addressed.

Grotzinger said NASA management "has not directed us to change anything in a substantial way, and I think the interests will align. Most importantly of all, we've got the money that we need to do the science as planned in the proposal, and we're looking forward to getting on with it."

Using orbital photography together with observations from Curiosity's cameras, mission planners have found a shortcut of sorts through two formations known as Pahrump Hills and Murray Buttes that represent a transition from crater floor sediments to the lower margins of Mount Sharp.

The shortcut will shave about a half mile off the route to the slops of the mountain while taking Curiosity to formations that show signs of a watery past.

"We can enter anywhere across that boundary and declare victory," Grotzinger said. "The fact that we have done it earlier rather than later just means we can get on with our science mission. And that has been our plan independent of the findings of the review board."

He said the new route through Murray Buttes was not done to save time per se, "it's because the geology just looks so darn good we can't resist it."

"The principle finding of the review panel is that they'd like to see more drilling, and that's exactly what we're going to do, so those align," Grotzinger said. "I think a couple of years from now nobody's going to worry about that."

Kathryn Stack, Curiosity mission scientist, said the Murray formation is particularly intriguing because it appears to be some 600 feet thick.

"To put that in perspective, the Yellowknife Bay formation, where Curiosity explored its first habitable environment, was only five meters (16 feet) thick," she said. "So if those couple of meters at Yellowknife Bay represent thousands to hundreds of thousands of years of deposition, at the Murray formation we potentially have millions to tens of millions of years of martian history just waiting for us to explore."

She said the Curiosity team has "a pretty great plan in place" for studying the formation and another known as Hematite ridge farther up the slope of Mount Sharp.

"If the past two years of Curiosity's exploration are any indication, we're going to see exciting things that we've never seen before and we couldn't possibly have anticipated," she said. "But that's one of the best things about this mission, and we're chomping at the bit to begin our exploration of Mount Sharp with Curiosity.

Is Instagram going too far to protect our feelings?