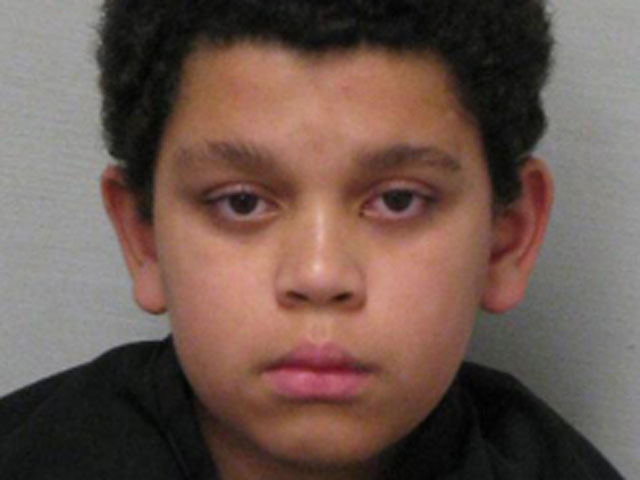 (CBS/AP) JACKSONVILLE, Florida - Christian Fernandez, the 13-year-old Florida boy who is charged as an adult with first-degree murder in the 2011 beating death of his 2-year-old half-brother and the sexual abuse of his 5-year-old half-brother, has had a life marked by violence and neglect.

When he was just two-years-old, Fernandez was found naked and dirty, wandering a South Florida street. The grandmother taking care of him was holed up with cocaine in a motel room, while his 14-year-old mother was nowhere to be found.

His very conception resulted in a sexual assault conviction against his father, and Fernandez' life got worse from there. He was sexually assaulted by a cousin and beaten by his stepfather, who committed suicide before police investigating the beating arrived.

The boy learned to squelch his feelings, once telling a counselor: "You got to suck up feelings and get over it."

Now 13, Fernandez is accused of murder and sexual abuse. He's been charged as an adult and is the youngest inmate awaiting trial in Duval County.

If convicted of first-degree murder, Fernandez could face a life sentence, but there are complications. The U.S. Supreme Court ruled this summer that it is unconstitutionalfor juvenile offenders to get mandatory life sentences without parole. Because of that, Fernandez' defense attorneys said they can't advise their client what kind of sentence he could face. Another complication involves whether Fernandez understood his rights during police interrogations.

"What would be a fair disposition? I don't suspect this case is going to end anytime soon," said Richard Kuritz, a former Jacksonville prosecutor who is now a defense attorney who has been following the case closely.

Some believe local State Attorney Angela Corey made a mistake by deciding to try Fernandez as an adult.

"He should be rehabilitated and have a second chance at life," said Carol Torres, 51. Her grandson attended school with Fernandez and she has created a Facebook page to support him.

In other states, children accused of violent crimes are often charged or convicted as juveniles. In 2011, a Colorado boy pleaded guilty to killing his two parents when he was 12; he was given a seven-year sentence in a juvenile facility and three years parole. A Pennsylvania boy accused of killing his father's pregnant fiance and her unborn child when he was 11 was sent this year to an undisclosed juvenile facility where he could remain in state custody until his 21st birthday.

The Justice Department said that 29 children under age 14 committed homicides around the country in 2010, the most recent year for which the statistics were available

Fernandez' judge - and jury, if the case gets that far - will have to decide whether to consider the boy's past when determining his future.

Fernandez was born in Miami in 1999 to Biannela Susana, who was 12. The 25-year-old father received 10 years' probation for sexually assaulting her.

Two years later, both mother and son went to foster care after authorities in South Florida found the toddler, filthy and naked, walking in the street at 4 a.m. near the motel where his grandmother did drugs.

In 2007, when Fernandez was 8, the Department of Children and Families investigated a report that he was sexually molested by an older cousin. Officials said other troubling incidents were reported, including claims that he killed a kitten, simulated sex with classmates and masturbated at school.

In October 2010, Fernandez and his mother were living in Hialeah, a Miami suburb, with his mother's new husband. Fernandez suffered an eye injury so bad that school officials sent him to the hospital where he was examined for retinal damage. Fernandez told officers that his stepfather had punched him. When officers went to the family's apartment, they found the stepfather dead from a self-inflicted gunshot wound.

Soon, the family moved north to Jacksonville and Fernandez enrolled in middle school, getting straight A's.

A few months later on March 14, 2011, deputies were called to the apartment: Fernandez' baby brother, 2-year-old David, had died at a local hospital. The medical examiner determined that the toddler had a fractured skull, bruising to his left eye and a bleeding brain.

Susana, then 25, admitted to investigators that she had left Fernandez, David and her other children home alone. When she returned, she said she found David unconscious. She waited eight-and-a-half hours before taking him to the hospital and searched "unconsciousness" online and texted friends during that time.

Susana was charged with aggravated manslaughter; the medical examiner said David might have survived if she had taken him to the hospital sooner for the head injury. She pleaded guilty in March and could get 30 years.

Fernandez, who had first been questioned as a witness, was soon charged with first-degree murder. The other felony charge was filed after his 5-year-old half-brother told a psychiatrist that Fernandez had sexually assaulted him.

The boy has talked openly to investigators and therapists about his life; the gritty details are captured in various court documents.

"Christian denied any plans or intent to kill his brother," one doctor wrote. "He seemed rather defensive about discussing what triggered his anger. He talked about having a 'flashback' of the abuse by his stepfather as the motive for this offense ... Christian was rather detached emotionally while discussing the incident."

Based on psychological evaluations, prosecutors say that Fernandez poses a significant risk of violence. That's why he is being detained pre-trial and why they charged him with two first-degree felonies.

Yet difficult questions remain for Judge Mallory Cooper: Should a child so young spend his life in prison? Does Fernandez understand his crimes, and can he comprehend the complex legal issues surrounding his case?

In August, Cooper ruled that police interrogations of Fernandez in the murder and sexual assault cases are not admissible, because the boy couldn't knowledgeably waive his rights to remain silent and consult an attorney. Prosecutors are appealing.

The defense wants the charges dismissed, saying the U.S. Supreme Court ruling banning sentences of life without parole for juveniles makes it impossible for them to advise Fernandez since the Florida Legislature has not changed state law. Prosecutors say they never said they would seek a mandatory life sentence - they say the old Florida law that called for a 25-year-to-life sentence could apply.

Mitch Stone, a Jacksonville defense attorney who is familiar with the case, said Corey and her prosecutors are in a tough position.

"I know they're good people and good lawyers," he said. "But if a resolution short of trial doesn't occur, this case is on a collision course to sending Cristian Fernandez to life in prison. That's why this is one of those very difficult cases. It's hard to understand what the appropriate measure is."

Complete coverage of the Cristian Fernandez case on Crimesider