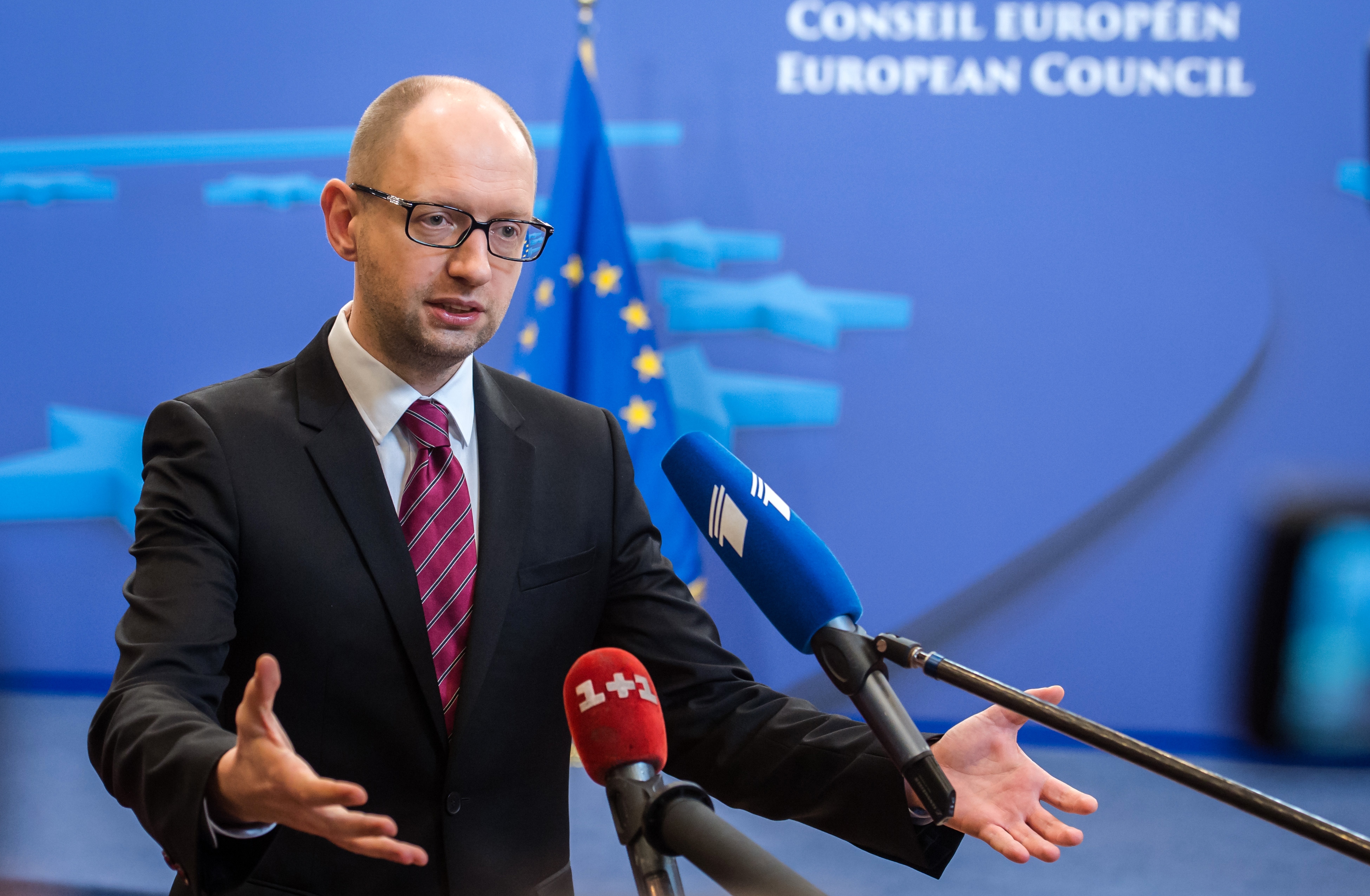 BRUSSELS -- Two almost simultaneous signatures Friday on opposite sides of Europe deepened the divide between East and West, as Russia formally annexed Crimea and the European Union pulled Ukraine closer into its orbit.

In this "new post-Cold War order," as the Ukrainian prime minister called it, besieged Ukrainian troops on the Crimean Peninsula faced a critical choice: leave, join the Russian military or demobilize. Ukraine was working on evacuating its outnumbered troops in Crimea, but some said they were still awaiting orders.

The chief of the U.N. came to Kiev and urged calm on all sides.

Many eyes were on Russian President Vladimir Putin, as they have been ever since pro-Western protests drove out Ukraine's president a month ago, angering Russia and plunging Europe into its worst crisis in a generation.

Putin sounded a conciliatory note Friday, almost joking about U.S. and EU sanctions squeezing his inner circle and saying he saw no reason to retaliate. But his government later warned of further action.

Russia's troubled economic outlook may drive its decisions as much as any outside military threat. Stocks sank further, and a possible downgrade of Russia's credit rating loomed. Visa and MasterCard stopped serving two Russian banks, and Russia conceded it may scrap plans to tap international markets for money this year.

Despite those clouds, Putin painted Friday's events in victorious colors, ordering fireworks in Moscow and Crimea reminiscent of the celebrations held when Soviet troops drove the Nazis from occupied cities in World War II.

At the Kremlin, Putin signed parliamentary legislation incorporating Crimea into Russia, hailing it as a "remarkable event."

At nearly the same time in a ceremony in Brussels, EU leaders sought to pull the rest of cash-strapped Ukraine westward by signing a political association agreement with the new Ukrainian prime minister.

The highly symbolic piece of paper is part of the same EU deal that touched off Ukraine's political crisis when then-President Viktor Yanukovych rejected it in November and chose a bailout from Russia instead. That ignited months of protests that eventually drove him from power.

"This deal meets the aspirations of millions of Ukrainians that want to be a part of the European Union," Yatsenyuk said in Brussels.

The agreement includes security and defense cooperation, he said, though it is far from full EU membership and doesn't include an important free-trade element yet.

But the EU decided to grant Ukraine financial advantages such as reduced tariffs to boost its ailing economy until the full deal can be signed. Those trade advantages are a blow to Russia, which had hoped to pull Ukraine into a Moscow-focused customs union instead.

In exchange for the EU pact, Ukraine's government is promising economic reforms.

"In the long term, the biggest challenge will be to build a strong Ukrainian economy, rooted in strong institutions that respect the rule of law," British Prime Minister David Cameron said at the EU summit.

Russia's foreign minister dismissed the EU pact, saying the current Ukrainian leadership lacks popular support and should have held elections before making such a decision.

"At times like this, it is vital that all parties refrain from any provocative actions that could exacerbate an already very tense and very volatile situation," he said.

The EU hit 12 more people with sanctions Friday over Russia's annexation of Crimea, bringing its list of those facing visa bans and asset freezes to 33. They include one of Russia's deputy prime ministers, a Putin adviser and the speaker of Russia's upper house of Parliament, according to a document obtained by The Associated Press.

Annexing Crimea "is a flagrant breach of international law and something we will not recognize. This behavior belongs to the Europe of the last century not this one," Cameron said.

Still, the EU roster fell short of the high-powered U.S. list, in an apparent reflection of European wariness of going as far as Washington to punish Russia - Europe's neighbor, energy supplier and trade partner.

President Barack Obama on Thursday ordered a second round of sanctions against 20 members of Putin's inner circle and a major bank supporting them. The list included four businessmen considered to be Putin's lifelong friends.

Putin tried to play down the sanctions at Friday's televised session of the presidential Security Council.

"We should keep our distance from those people who compromise us," he said, a jocular reference to the officials on the sanctions list, some of whom attended the meeting.

Putin added sardonically that he would open an account to keep his salary in the targeted Bank Rossiya, owned by Yuri Kovalchuk, considered to be Putin's longtime friend.

At the same time, Putin said he sees no immediate need for further Russian retaliation over the U.S. sanctions, adding that Russia will keep funding a program jointly with NATO to service Afghan helicopters and train their crews.

However, just a few hours later, the Russian Foreign Ministry said Moscow will "harshly" respond to the latest round of U.S. sanctions, and Putin's spokesman, Dmitry Peskov, said Russia will retaliate.

CBS News' Elizabeth Palmer reports from Crimea that Ukrainian servicemen are still holding out on ships, though overnight two Ukrainian naval vessels were seized by pro-Russian crowds and paramilitaries.

Several thousand military personnel do remain dug in on their bases, Palmer reports. The government promised they would be a part of a plan to evacuate safely to new jobs and lives across the border but they are still waiting to hear how that will happen and how soon.

Amid its political crisis, Ukraine is teetering on the verge of bankruptcy, struggling to pay off billions of dollars in debts in the coming months. The U.S. and the EU have pledged to quickly offer a bailout.