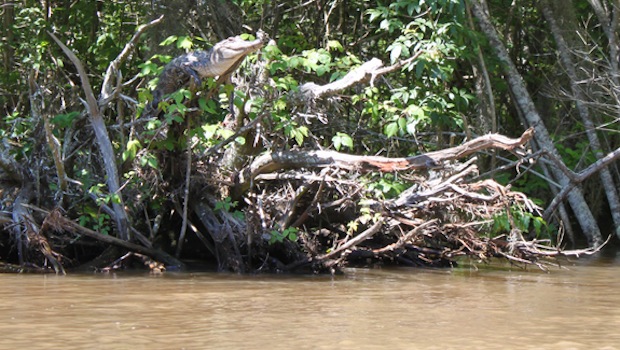 Forget leapin' lizards. In Australia, Africa and North America, it's climbin' crocodiles you have to worry about.

New research finds that — yikes — crocodiles can climb trees, even reaching the uppermost branches. Four species found on three continents showed this behavior, which may help the reptiles regulate their body temperature and survey their habitat.

"The most frequent observations of tree-basking were in areas where there were few places to bask on the ground, implying that the individuals needed alternatives for regulating their body temperature," the authors wrote online Jan. 25 in the journal Herpetology Notes. "Likewise, their wary nature suggests that climbing leads to improved site surveillance of potential threats and prey." [Alligator Alley: Pictures of Monster Reptiles]

Crocodiles, like other reptiles are ectothermic (also called "cold-blooded"), meaning they can't regulate their own body temperature and so must rely on outside sources such as the sun.

Crocodiles are usually considered ground-dwellers, but a few anecdotes suggested they climb at least occasionally. Local reports from Mexico, Colombia, Indonesia and Botswana, among other spots described crocs basking in mangroves and other trees. A photographer even snapped a shot of a croc cousin, the American alligator (Alligator mississippiensis) in a tree about 4 to 6 feet (2 to 3 meters) above the water at the Pearl River Delta in Mississippi.

University of Tennessee zoologist Vladimir Dinets and colleagues decided to pin the phenomenon down. In the course of conducting their crocodile research, the scientists kept sharp eyes out and recorded their observations of climbing crocs.

In Australia, they observed freshwater crocodiles basking on low-hanging branches day and night. When approached by boats, the crocs splashed into the water below to escape. Climbing Aussie crocodiles were more likely to be small or juvenile; hatchlings are sometimes able to cling to brickwork and escape crocodile farms.

In the Americas, Dinets observed crocs as long as 3 feet (1 m) sunning themselves on mangrove roots and branches. Most of the time, the creatures were found no more than 3 feet (1 m) up. Dinets never saw any crocs in the process of climbing, just at their destinations, and when approached, the animals in trees always jumped or fell into the water.

"This shyness might explain why tree-climbing behavior in crocodilians remains relatively little known despite being relatively common," the researchers wrote.

Dinets and his colleagues have previously found that crocodiles and alligators can use tools, disguising themselves with sticks as they hunt. When birds land on what appears to be a muddy log covered in useful nesting materials, they become dinner for the waiting beast.

The champion climbers of the crocodilians seem to be Central Africa's slender-snouted species, which regularly bask up high, the researchers found. One of these crocs, 4.5 feet (1.4 m) long, was seen roosting at the end of a fallen tree. To get there, it would have had to scale a 13-foot-tall (4 m) vertical bank and then crawl 13 feet (4 m) out on a sloping branch.

The largest tree-climber observed was a Nile crocodile 6.5 feet (2 m) seen basking a foot and a half (0.5 m) above water on a fallen branch in Botswana.

There is no evidence that crocodiles have evolved to climb trees, but they are still capable of climbing high, Dinets and his colleagues concluded. The most common spots for climbing lacked rocks or other warm places to bask, suggesting that crocodilians use trees to get out of the shade and into the sun. However, the existence of night-climbing suggests the behavior has another function — perhaps the ability to see danger coming.

A tree, the researchers wrote, provides a safe vantage point "where escape is as easy as falling off a log."