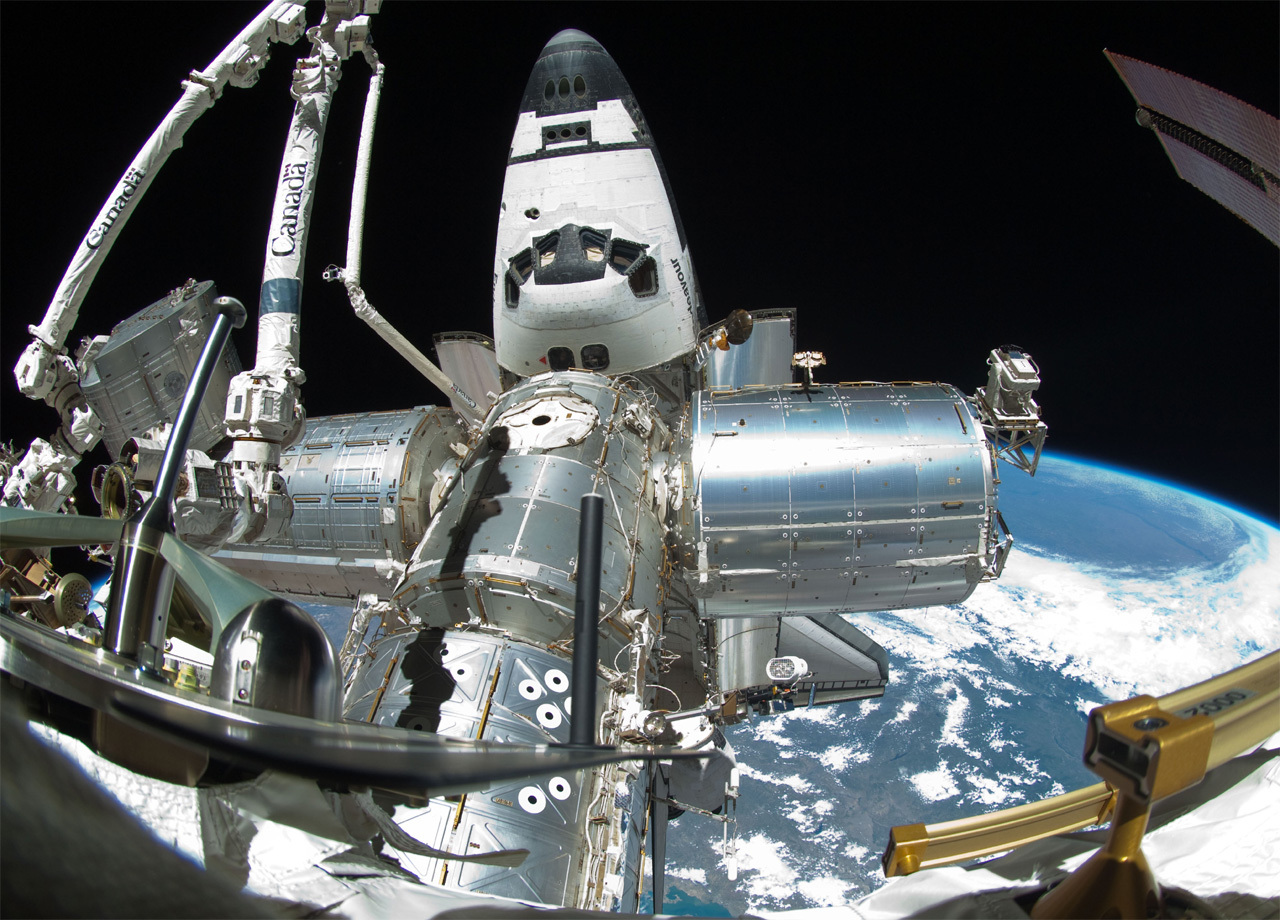 KENNEDY SPACE CENTER, Fla. - The shuttle Endeavour's crew helped out with repairs to one of the International Space Station's carbon dioxide scrubbers Saturday, transferred equipment and supplies to and from the lab complex to the shuttle, and packed up spacesuits and other EVA gear for the return to Earth, as NASA's next-to-last shuttle mission moved into the home stretch.

And at Mission Control in Houston, flight controllers marveled at spectacular photos of Endeavour and the International Space Station that were captured during a spacewalk Friday by astronauts Michael Fincke and Gregory Chamitoff, reports CBS News space analyst Bill Harwood.

Fincke and Chamitoff, both veterans of previous long-duration stays aboard the space station, spent the day Saturday replacing a CO2-absorbing cartridge, or bed, in one of the station's two U.S. carbon dioxide removal assemblies. The unit was pulled out of its rack in the Tranquility module earlier in the mission.

"One of the critical items we wanted to get repaired is the carbon dioxide removal assembly, or CDRA," said Flight Director Derek Hassmann. "It's a piece of hardware that wasn't necessarily engineered or designed to be repaired on orbit, but over the last several years we've had a number of different issues with the unit and we've come a long way in terms of our ability to repair CDRA on orbit."

Using the roomy Japanese Kibo laboratory, Fincke and Chamitoff worked through a complicated procedure to remove the CO2-absorbing cartridge and install a replacement.

"Everything went back where it was supposed to," Fincke reported toward the end of the crew's day. "We're very optimistic this is going to work out very nicely after we install it tomorrow."

"You guys have done a great job, we sure appreciate all the hard work you've done all day today," radioed Lucia McCullough from mission control.

"Like we said at the beginning of the day, we feel very honored ... to be treated like station crew members and getting the job done," Fincke said. "The can-do crew is back."

Fincke now stands at 20th on the list of most experienced space fliers behind 19 Russian cosmonauts led by Sergei Krikalev, who has logged 803 days in space during six missions. Assuming Endeavour lands Wednesday as planned, Fincke will pass cosmonaut Pavel Vinogradov and move into a tie with cosmonaut Valery Korzun for the 18th spot with 382 days off planet.

Above: A fish-eye lens attached to an electronic still camera was used to capture this image of NASA astronaut Michael Fincke, top center, during the mission's fourth spacewalk at the International Space Station, May 27, 2011. (NASA)

Along with work to repair the CDRA, the astronauts also prepared two spacesuits for transfer back to Endeavour and set up another for incoming station flight engineer Michael Fossum, scheduled to arrive aboard a Soyuz spacecraft next month.

"In addition to the CDRA work and transfer, we also did a lot of work in the joint airlock," Hassmann said. "One of the things we have to do on every shuttle mission is get the shuttle crew's spacesuits ready for return on the orbiter. For this particular mission, Drew Feustel and Mike Fincke are the designated astronauts who would perform (an emergency) spacewalk is one was required after undock. So one of the things we have to do toward the end of each of these missions is to prepare their spacesuits for return on the shuttle."

The astronauts were scheduled to go to bed just before noon EDT. Wakeup is planned for 7:56 p.m. The combined crews will work overnight to wrap up equipment and experiment transfers to the shuttle before holding a traditional farewell ceremony and closing hatches between the station and the shuttle shortly after 7 a.m.

If all goes well, Endeavour will undock just before midnight Sunday, setting up a landing back at the Kennedy Space Center around 2:35 a.m. Wednesday to close out the shuttle's 25th and final flight.