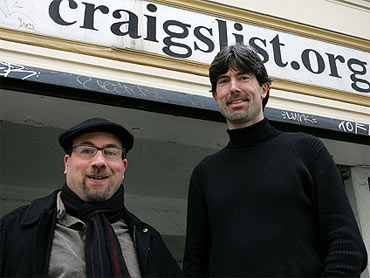 Craiglist's "adult services" section has been shut down in the U.S., but prostitution on the Internet is alive and well - even, quite possibly, on Craigslist.

Users of the website and its CEO grouse that the Internet is still full of sites where people can find prostitutes. As for the massive online classifieds site itself, many personal ads, which remain on the site, appear to be thinly veiled solicitations of sex for sale.

State attorneys general had pressed Craigslist to do more to block potentially illegal ads promoting prostitution, and hailed the company's decision to take down its adult services section on Saturday. But like other illegal online activities targeted with prosecution or lawsuits, including gambling, child pornography and unauthorized music downloads, shutting down one outlet simply sends many users running to others.

John Palfrey, a Harvard University law professor and co-director of the Berkman Center for Internet and Society, said the move from Craigslist was still a victory because it moved the ads off a highly visible location.

Neither Craigslist CEO Jim Buckmaster nor a company spokeswoman responded to e-mails and phone calls seeking comment on Sunday. The company previously said it would issue a statement on the matter, without saying when.

Attorneys general from 17 states sent Craiglist a letter last month demanding that it take down its adult services section, saying the company was not doing enough to deter prostitution and child trafficking. Whether Craigslist could be found liable is a murky legal issue, but pressure on the company grew after some highly publicized incidents where authorities said encounters set up through Craigslist ended in violence and even death.

A former medical student, Philip Markoff, was accused of killing a masseuse he met through Craiglist. He committed suicide last month in the Boston jail where he was awaiting trial.

Some ads still carried in Craigslist's personals section look like they could fall in similar territory. "I am the perfect lunchtime or after-5 companion for businessmen that jet-set, work long hours or have family obligations," read one ad in the casual encounters section, appearing to advertise massages.

Craiglist's personal ads, which are free, are not regularly vetted. M. Ryan Calo, a senior research fellow at the Center for Internet and Society at Stanford Law School, said ads for sexual services could become harder to monitor if they begin migrating back into the personals.

It also could be more challenging for law enforcement to pick out the illegal ads.

"Instead of being in small stream, it's going to be in a big ocean," Calo said.

Those trying to sell sex who give up on Craiglist have many other sites to choose from. As Craigslist users complained about the company's move in postings Sunday, some rattled off the names of other sites where they could find the same services.

Getting such ads removed from other sites is the next goal, said Malika Saada Saar, executive director of the Rebecca Project for Human Rights, a group that has been involved in pressuring Craigslist to block adult services ads.

Palfrey said Craiglist's decision is likely to cause other online classified pages to think twice about the ads on their sites. Backpage.com, an online classifieds page similar to Craigslist owned by the alternative newspaper chain Village Voice Media, has an "adult entertainment" section that is highly explicit and features ads for a wide array of sexual services.

In a May blog post, Craigslist's Buckmaster said the company's ads were no worse than those published by Village Voice Media. He cited one explicit ad that included the phrase: "anything goes $90."

An attempt to reach Village Voice Media on Sunday was unsuccessful.