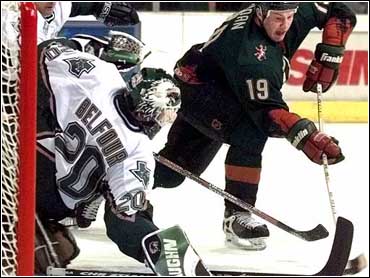 The Phoenix Coyotes took a big step in reaching their goal of finishing first in the Pacific Division: They beat the defending Stanley Cup champion Dallas Stars.

Dallas Drake had two goals, including the go-ahead score with 2:55 remaining, and the Coyotes went on for a 4-3 win over the Stars on Friday night. Shane Doan also had two goals for the Coyotes, who moved within two points of the Pacific-leading Stars.

"We're putting a big premium on first place," Drake said. "To have that advantage in the playoffs is huge and this is a major step."

Mike Modano's 25th goal tied it 3-3 for Dallas with 10:38 left, but Drake's 10th of the season beat Stars goalie Ed Belfour high from the slot following a pass from behind the net by Jeremy Roenick.

"I snuck into an opening and there was a lot of traffic in front," Drake said. "I shot it high over his shoulder."

A defeat would have put the Coyotes six points behind the Stars, which would have placed Phoenix in a tough spot.

"The difference between two points and six is huge," Doan said. "I hope the message that we sent tonight is that we're not going to go away."

"They got in front that night and then just schooled us on defense," said Doan. "I don't think we had one good scoring chance in the last two periods. Tonight we played a lot better."

Belfourwho started the night with a 2.07 goals-against average and .920 save percentage, had one of his poorest efforts of the season.

"I thought my timing was a bit off tonight," Belfour said.

Doan gave the Coyotes a 1-0 lead at 8:26 of the first period. Darryl Sydor tied it 1:07 later on a backhander from the slot.

Drake gave Phoenix a 2-1 advantage with his ninth goal at 17:29 of the first. Roman Lyashenko tied it at 2 for the Stars at 6:37 of the second on a rebound.

The Coyotes took a 3-2 advantage with 5:13 left in the second when Doan fired a wrist shot from the right circle into the top right corner.

Stars captain and top defenseman Derian Hatcher returned to the lineup after missing 24 games with a calf injury. Hatcher played 16:36 and 24 shifts.

"I felt a little slow at times but overall it felt good," Hatcher said. "It's going to take a while. The hardest part was losing. It's frustrating but I don't think we were outplayed."

Dallas' league-leading penalty-killing unit shut out Phoenix on four second-period power plays, including being down two skaters for 1:25.

The Stars were without Joe Nieuwendyk, Jere Lehtinen, Brian Skrudland and Shawn Chambers, all sidelined by injuries. Jamie Langenbrunner also was scratched due to neck soreness, and is day-to-day.

Keith Tkachuk missed his second consecutive game for the Coyotes with a sprained ankle.