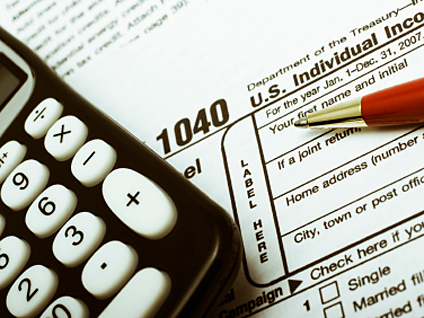 Among the many reasons Americans dread filing their federal income tax returns is the level of complexity built into the current tax system. The code's byzantine maze of exemptions, deductions, loopholes, and other quirks leaves many taxpayers befuddled, forcing them to pay for software, an accountant, or a tax preparation service to guide them through the process.

It's no surprise, then, that the need to simplify and streamline the tax code is a central feature of most tax reform proposals. Last month, for example, as Texas Sen. Ted Cruz was announcing his 2016 presidential bid, he outlined perhaps the simplest possible vision for tax reform.

"Instead of a tax code that crushes innovation, that imposes burdens on families struggling to make ends meet, imagine a simple flat tax that lets every American fill out his or her taxes on a postcard," said Cruz, a freshman Republican and one of the Senate's most conservative members.

His proposal was likely well received by the right-wing voters Cruz is targeting, given their philosophical aversion to taxes and complex government regulations. But is it a workable solution? Would a flat tax be politically feasible? Would it be wise, as a matter of fiscal policy? And if not, how else might the complex process of filing tax returns be condensed into something that could fit on a postcard?

Cruz's plan is straightforward enough: all Americans would pay the same percentage of their income in federal taxes, regardless of how much money they're earning. He hasn't fleshed out many specifics beyond that - whether the flat tax would replace payroll, excise, and other taxes, for example, or whether he'd preserve a few of the current code's deductions and credits.

A flat tax has long enjoyed support among some elements of GOP. Businessman Steve Forbes based his presidential campaign on the idea in 1996 and 2000, and Republican candidates have periodically resurrected it since then, most recently Texas Gov. Rick Perry in 2012 and businessman Herman Cain, whose 9-9-9 flat tax made for a memorable campaign slogan.

Conservative policy analysts have generally embraced the idea, pitching it as a way to juice economic growth, make the U.S. more competitive, and reduce the costs associated with filing taxes under the current complex system.

Mitchell pointed to the experience of Hong Kong, which has implemented a version of a flat tax, to argue that the proposal would help increase growth and generate prosperity. "It's not a cure-all, but it minimizes the distortions and damage associated with the current system," he said.

Mitchell allowed that the idea could be politically difficult to implement because "there are so many interest groups that benefit from the current system."

Part of the political task facing proponents of a flat tax is convincing voters it won't stick poor and middle class voters with a higher tax bill. "The poor don't pay under the current system. And with the generous family-based allowance under a flat tax, they wouldn't pay after reform," Mitchell said. "The real question is the impact on the middle class. That's a function of the tax rate, which is why most advocates call for a rate of 17 percent. Almost all taxpayers will be better off."

The Heritage Foundation, a conservative think tank, has put forward a proposal dubbed "The New Flat Tax," and it comes with some specifics. The plan would replace all federal income, payroll, and estate taxes and impose a 28 percent rate on all taxpayers. It would preserve three deductions - for higher education, gifts and charitable contributions, and an optional home mortgage interest deduction. And there would be only two tax credits: an earned income credit " to preserve the level of income support for low-wage workers," according to a Heritage fact sheet, and health insurance tax credit for low- and middle-income families ($3,000 for families, and $2,500 for singles).

The result, Heritage argues, is a rate "comparable to or significantly below the typical rate facing an individual family today."

Left-leaning experts, though, say flat tax proposals would destroy the progressive nature of the current tax code, in which those who earn more pay more. They're not convinced a flat tax can be structured in a way that prevents poor families from sustaining a tax hike.

"It is a misguided idea because the progressivity in our existing tax code is a critically important component, and it's something we wouldn't want to lose," Jared Bernstein, a senior fellow at the Center for Budget and Policy Priorities and the former chief economist for Vice President Biden, told CBS News.

"Remember, the earned income tax credit phases out by the time you hit the middle class," explained Bernstein. "So what you'd want to see from a plan like that is how the liability would change under that plan versus the current system, and I suspect what you'd see is a system that's considerably more regressive than the current system, though not as regressive as a pure flat tax."

And even if lower-income families are spared a tax increase, some economists say, a flat tax could still represent a huge tax decrease for the wealthy - and therefore, it would blow up the deficit by taking a big bite out of revenues.

"You'd have to see the [Congressional Budget Office] scores, but many of the proposals that have been floated, once they're scored, you find out the flat tax rate would have to be much higher than the advocates tend to want in order for them to be deficit neutral. Or the tax would have to hit a lot more people than they might envision, and that would make it far more regressive," Bernstein explained. "At the end of the day, it's very hard to make the numbers work out."

"I agree with that analysis," added Kyle Pomerleau, an economist with the nonpartisan Tax Foundation, in an interview with CBS News. "One of the things that proponents of the flat tax need to realize is that if you want to replace the entire tax code with a flat tax, you need to ask yourself, 'Are we replacing all of the revenue or only part of it?'"

"When these flat taxes are sold, they're sold as a way to lower the tax rate first," explained Pomerleau. "They'll say, 'We want to get to this rate and we'll worry about the amount of revenue we'll need later.' But that's sort of backwards. You should start with the base, which is consumption, say, 'We need x amount of revenue,' and then adjust the rate to get that amount."

If the goal is to simplify the system, Bernstein said, a flat tax is not the only way to go. He emphasized that the complexity of the tax code has nothing to do with the number of rates - "You could have a system with 100 rates and still fill out your return on a postcard" - and everything to do with the enormous list of "exemptions, preferences, and opportunities for tax avoidance" in the current system.

Tackling those complexities, he said, can be accomplished by lowering the rates and eliminating loopholes -- a general framework to which many recent progressive tax reform proposals have adhered, from the Simpson-Bowles deficit reduction commission's proposal to the plan offered by former Ways and Means Chairman Dave Camp, R-Michigan, before he stepped down from Congress this year.

Those proposals may not simplify the tax code enough to allow taxpayers to fill out their returns on a postcard. But they'd get a lot closer to that goal than the current system.