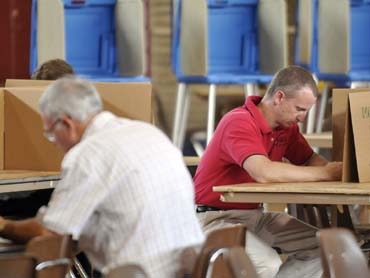 As primary elections in Alabama, Mississippi and New Mexico get underway today, one race to pay close attention to is Alabama's Democratic gubernatorial primary, where Rep. Artur Davis is making a bid to become the state's first African-American governor.

Yet despite the historic circumstance, the state's four major black political groups have been among those criticizing the four-term congressman.

As a strong supporter of President Obama's presidential campaign, Davis similarly worked to keep race from being a major factor in his campaign, and earlier this year he announced that he would skip a mandatory screening process conducted by the state's major black political groups.

Davis told the Associated Press that "I made a decision to take my case directly to African-American voters." But the move ultimately lost him the support of the influential institutions, who instead endorsed Davis' white opponent, Ron Sparks, the state's agricultural commissioner.

Davis has also come under fire from the left for his opposition to the health care bill, which he called overly expensive and insufficiently targeted. Without naming names, civil rights leader Jesse Jackson called out the congressman for voting against the bill, telling the Hill newspaper, "You can't vote against health care and call yourself a black man."

Opponent Sparks also criticized Davis on the issue, saying that his opposition to the bill was simply designed to pander white voters of Alabama.

But CBS News Elections Director Anthony Salvanto said that Davis' bid shouldn't be ruled out. "Certainly Alabama has proved tough terrain for Democrats of late, and Obama got just 39% here," he said. "But Davis, who's staked out more some more moderate positions, would certainly have the benefit of time after an early primary to get his message out, if he emerges as the nominee."

The winner of the Democratic primary would go on to face one of the several Republican candidates, including Byrne and the son of former Alabama governor Fob James, Tim James, both of whom have garnered nationwide attention for their campaign ads.

In April, James released a campaign advertisement questioning the state's policy of printing driver's license exams in 12 different languages. In the ad, James said, "We speak English. If you want to live here, learn it."

Byrne made headlines when he responded to an ad attacking him for suggesting that evolution, not creationism, "best explains the origin of life." He responded by saying that the ad was full of "despicable lies" and that he had always been a strong supporter of teaching creationism. "As a member of the Alabama Board of Education, the record clearly shows that I fought to ensure the teaching of creationism in our school text books," he said.

A third potential challenger is former Alabama Chief Justice Roy Moore, who too has generated controversy. In 2003, Moore resigned after he ignored orders to remove a Ten Commandments monument in front of the Alabama courthouse.

Polls show Davis holds an single-digit lead over Sparks in the Democratic primary going into election day. In the Republican primary, a recent poll suggests, Byrne leads the pack but holds just a six-point lead over Moore, his closest competitor. Polls close tonight at 8:00 PM Eastern.