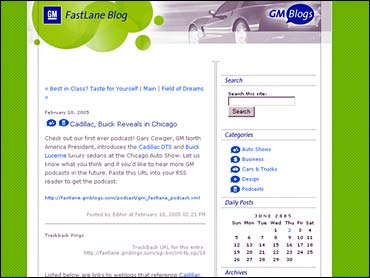 When General Motors Corp. wanted to stop speculation this spring that it might eliminate its Pontiac and Buick brands, Vice Chairman Bob Lutz took his case directly to dealers and customers who were up in arms about the possibility.

He wrote about it on the company's blog.

"The media coverage on the auto industry of late has done much to paint an ugly portrait of General Motors," began Lutz's entry on GM's FastLane Blog, which the company launched in January.

The March 30 entry went on to say that widely reported remarks he made to analysts the week before had been "taken out of context" and that the automaker would not shed the brands.

A growing number of companies are stepping softly into the blogosphere, following a path blazed by Microsoft Corp., Sun Microsystems Inc. and others in the technology field.

"When we feel that we need to get a direct response out there, we've certainly got this bully pulpit to some extent," said Michael Wiley, GM's director of new media. "It's a place where we can talk directly to people unfiltered."

It's hard to quantify how many companies, executives and employees are blogging but there are probably more than 100 official corporate blogs, with hundreds more in the works, said Pete Blackshaw, chief marketing officer for Intelliseek Inc., a company that analyzes and tracks blogs.

In addition to Lutz, other notable executives who pen public blogs include Richard Edelman, president and chief executive of the global PR firm Edelman and Craig Newmark, founder of the online swap meet Craigslist.org.

"I think that in two years ... we will look back and laugh that we treated this as such a big deal," said Blackshaw, who said it's inevitable that companies will adapt to the consumer-driven atmosphere of the Web.

The FastLane Blog gets between 150,000 and 200,000 unique visits a month, and Sun Microsystems President Jonathan Schwartz's blog gets 300,000 visits.

But bad blogging can easily backfire. Readers will pick up insincerity instantly.

"Don't go toward fake blogs. Don't launch character blogs. Use a blog for what it's for, transparency," said Steve Rubel, vice president of client services at CooperKatz & Co., a New York PR firm.

Rubel follows blog news on his blog, Micro Persuasion, and runs his company's unit of the same name, advising clients on blogging and on podcasting, the suddenly fashionable creation of downloadable person-to-person broadcasts.

He and other PR professionals can rattle off blogs gone wrong — usually "fake blogs" that stir up the ire of bloggers by hiding the fact that they are really ad campaigns, such as one McDonald's posted in advance of a Super Bowl campaign about a Lincoln-shaped french fry.

Blogs that smack of press releases won't do the job, Rubel said. He tells clients to see what's out there about their company or industry, then decide whether they want to engage bloggers or even start their own blogs.

One executive praised for his no-holds-barred approach to blogging is Schwartz, who started Jonathan's Blog about a year ago. Sun also encourages its employees to blog, and about 2,000 do.

For Schwartz, a blog was the natural way to reach out to the developer community that Sun seeks to attract, a cynical audience that regularly turns to blogs for information anyway. Schwartz often uses the format to criticize analysts and rivals.

A post Schwartz wrote last August claiming Hewlett-Packard Co. had abandoned an HP operating system, for example, resulted in a cease-and-desist letter from the company — which Schwartz promptly referenced and linked to on his blog.

"At the end of the day, the job of any good leader at any corporation is to communicate," Schwartz said. "The hallmark of companies that will find blogs useful is the company that cares about its perception ... and the integrity of its relationship with its customers."

Corporate blogs don't have to be controversial to work, though, as evidenced by the five blogs operated by Stonyfield Farm, a New Hampshire company that sells organic yogurt and ice cream.

The company's blogs include one for new parents to discuss baby issues and another written by an organic dairy farmer.

"I had been early on struck by the power of blogging for the Dean campaign itself, and as I watched other campaigns get into it, I realized this is completely applicable to brands," Hirshberg said.

Aircraft manufacturer Boeing Co. also uses a blog to promote its brand. Randy Baseler, vice president of marketing for Boeing Commercial Airplanes, made his first entry in Randy's Journal on the day before rival Airbus unveiled its A380 superjumbo jet.

He has spent much time since contrasting the two companies' philosophies about air travel.

Companies that decide to enter the blogosphere should set up some rules, Rubel said. Key is making sure bloggers don't reveal proprietary or financial information — a lesson learned by former Google employee Mark Jen, who was fired after gabbing about life at the company on his personal blog, which was not sanctioned by Google.

He says that as long as companies are prepared to deal with the sometimes harsh comments left by visitors, corporate blogs are a great tool for raising company profiles.

At GM, Lutz receives dozens of comments on each of his entries, ranging from "I drive a Buick and have for years. I love the brand!" to "Yawn!! Buick. Uhhhhh, does anybody buy Buick anymore?"

Visitors also have alternately praised Lutz for his candor and accused him of letting his PR department write the blog.

Wiley said opening the GM blog to comments was a source of concern, but officials ultimately decided comments were key to having a two-way conversation with customers. He said comments are edited only to remove profanity or personal attacks.

As for Lutz's entries, Wiley said that while he and an outside PR firm give Lutz suggestions for topics and do light editing, the words and thoughts are Lutz's.

A main goal of the blog is to keep the 97-year-old automaker culturally relevant, Wiley said.

"GM isn't always considered to be on the forefront of cultural trends," he said. "By getting in at the forefront of a communication trend ... being a part of that kind of gives you a fresh image."