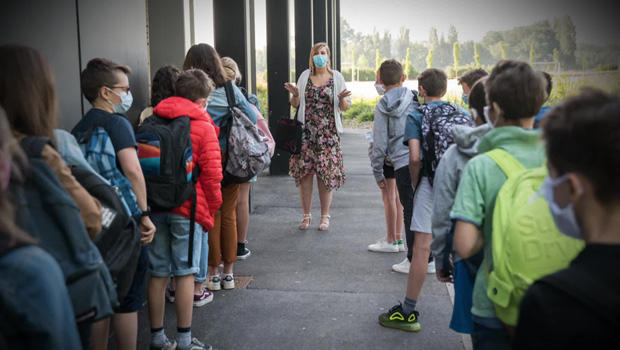 Parents and teachers may argue over the reopening of schools this fall. One parent told a Pittsburgh TV station, "It's not safe yet. I don't think we have enough testing in place, and testing for asymptomatic students."

But in fact, they all want the same thing: what's best for the kids.

The only part they disagree on, is what is best for the kids.

If the most important thing is our kids' education and social development, there's only one answer: "We believe that school should be open, but it has to be done safely," said Dr. Sally Goza, a pediatrician, and the president of the American Academy of Pediatrics. "We know that children get more than reading, writing and arithmetic at school. They get social and emotional development skills. They learn to get along with other children. They get healthy meals. They get good exercise."

Whereas trying to learn at home, on a screen, has all kinds of problems. Studies show that kids don't learn as well that way. They're more exposed to domestic abuse. Plus, how are parents supposed to work when their young kids are stuck at home?

But, if what's best for the kids is minimizing their exposure to the COVID virus, then the answer is different: Keep them home.

"I don't want to hear that students are sick or they have gotten their parents sick or their grandparents sick," said DeShanna Barker, a math teacher at the Preparatory Academy for Writers in New York City. She's also a parent.

Correspondent David Pogue said, "The pediatricians and the mental health experts say, 'Kids can't stay home for a year, looking at the laptop schooling. They need to be among other people.'"

"I agree," Barker said. "However, we won't be able to worry about social-emotional issues with our children if they're getting sick or their parents are dying."

Even if students can keep six feet apart in the classrooms, how do they do that in the hallways? Or the cafeteria? Or on school buses? What about things they touch, like lockers and drinking fountains and computer keyboards?

At this moment, about half of U.S. schools plan to begin the semester exclusively online. The other half will welcome students to their school buildings in person at least part-time.

That second group includes the largest public-school system in the country – New York City's – with 1.1 million students and 1,800 schools.

Pogue asked Richard Carranza, New York City's chancellor of schools, "Are you getting much sleep these days?"

"Sleep? What is that? I haven't slept since March!" Carranza replied.

In crafting the school re-opening plan, Carranza said, "We've had superintendents, parents, medical professionals, we've had epidemiologists. When you have that many voices, it's sometimes a little messy. But that's okay."

The resulting plan is for schools to open in September. But to allow enough space for distancing, each school will divide their students into two or three groups, who'll go to school on alternate days of the week. The remaining days, they'll learn at home.

Meanwhile, inside the schools, the city intends to live by the five scientific golden rules:

Carranza said, "When we speak with our medical experts, they say the #1 thing you should be doing is face coverings for all individuals in a school building. We're gonna remind students. We're gonna continue to make it a game for our youngest students that they understand and it's fun to wear those face masks.

"Second one is a lot of sanitizer, a lot of hand washing.

"The fourth thing is social distancing. So, students will see one-way hallways.

"And then the fifth thing is ventilation of an indoor space," Carranza said. "You have to do all five to have the best chance of really negating the possibility of spread."

They're not quite that strict in Spring Hill, Tennessee, where students started school two weeks ago, in-person, five days a week.

Pogue asked if students will notice any changes to their routine.

"Every child gets a temperature check when they get out of the car and when they get off the bus every day," Massey said. "They'll eat lunch in the cafeteria; we do space them out a little more."

"I guess the real nightmare scenario in that situation is when a child gets infected but doesn't show symptoms, as children often don't, and then brings it home to the grandparents," Pogue said.

"And that could be a possibility," Massey said. "We just, you know, just like with any other virus, that that does – you can bring it home to anybody."

Pogue asked, "You've seen that some schools have opened, and a couple have had to backtrack. Does that make you nervous at all?"

"It doesn't make me nervous," Massey replied. "We can't live our lives in fear. And we have to think what's best for us and our kids. If we were to shut down, we could do that and it would be okay."

Now, COVID-19 disproportionally affects people with low income – and that's especially true when it comes to reopening schools. Millions of kids don't have computers, or even internet access. How are they supposed to learn at home?

Meanwhile, many wealthier families are forming what are called "pandemic pods." Jonathan and Sarah Alloy are working parents in San Francisco. They've joined two other families whose children will all be attending school remotely.

He described how their kids will be handling schoolwork: "We're hiring a tutor, not to replace our public school teachers, but to ensure that our kids are paying attention to their public school teachers. They're gonna make sure the kids are doing their classwork and homework. They're going to ensure the kids are getting some recess and exercise, and having lunch, and being safe."

Sarah added, "It's all sorts of things, like, the kids need snacks at random times. The kids need to be told, 'Okay, Zoom starts in two minutes. Get ready.'"

The cost of the tutor is $40 an hour for four children.

"Okay, now, a lot of people seeing this are going to be saying, 'Oh, great for you, wealthy California executives, what are the rest of us supposed to do?'" said Pogue.

"We are incredibly fortunate that we are able to partner together with other families and collectively afford to hire a tutor," Jon replied. "We recognize that is not the case for everyone. And there's definitely some guilt there."

One thing's for sure: This school year won't look like any other, in the U.S. or anywhere else. In Thailand, some students sit in isolation chambers. In Senegal, workers spray returning students with disinfectant. In India, some classes meet outdoors, where the virus very rarely spreads. In Denmark, the students sit, eat and play on the playground in isolated clusters.

But in the U.S., every state has different infection rates, and we have no national strategy to guide us. So, we're stuck with a menu of terrible choices – and no single solution that can work everywhere. So, the uncertainties, the disagreements and the fears remain.

Pogue asked teacher DeShanna Barker, "If you could address anxious students who happen to be watching this right now, do you have any words of reassurance?"

"I can tell you, we want nothing more than to see you go back to school," she said.

Barker recommends that New York hold off on reopening the schools until more details have been ironed out. "In this moment, what we really want to see, we want to know that you're safe; that you are safe and that your family members that you go back home to are going to be safe," Barker said. "Without that, we don't think it's time just yet for you guys to go back."

But New York City chancellor Carranza says that the schools will be ready: "We are leaving no stone unturned. We are consulting with all of our medical experts. We are more strict than what anyone else has told us to be.

"I would give my life before we take one of yours," he said. "And that's the weight that I carry with me every single day."