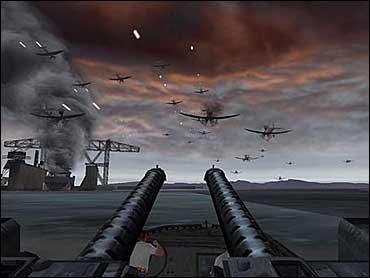 Unless they've dropped some clear hints, choosing a gift for the die-hard video gamers in the family could be overwhelming this holiday season.

An estimated 250 new games are expected in this pivotal season for game companies — it accounts for about half of the industry's $10 billion annual sales.

Whether you prefer adaptations of Hollywood blockbusters, realistic war epics or kid-friendly go-cart racing, there's something for just about every gamer.

The most popular platforms have not changed: Nintendo's GameCube and Game Boy Advance, Sony's PlayStation2 and Microsoft's Xbox dominate, with personal computers accounting for a relatively niche audience.

With the next round of consoles still a few years away, Nintendo, Microsoft and Sony have been dropping prices to woo new customers.

At $99, the GameCube is the cheapest. Sony and Microsoft have slashed prices to a lesser degree, instead offering bundles that include the console, several games and accessories such as an Internet adapter for less than $200.

Action movies are often fertile ground for video games. This year is no exception.

"Terminator 3: Rise of the Machines" coincided with the film's release on DVD. You get to play Arnold Schwarzenegger's terminator.

Not to be outdone by the upcoming film "The Lord of the Rings: The Return of the King," game makers are offering three titles based on the saga of an almighty ring, frightful orcs and cute little hobbits.

"The Lord of the Rings: The Return of the King" by Electronic Arts mirrors events in the movie, including Frodo Baggins and Samwise Gamgee's harrowing journey to Mount Doom.

There's also "The Lord of the Rings: War of the Ring," a strategy game for personal computers set in Middle Earth, and "The Hobbit," based on J.R.R. Tolkien's prequel about Frodo's uncle, Bilbo Baggins, and his encounter with Smaug the dragon.

War games are making a mark this year, with three titles in particular sure to make you stand at attention.

"Call of Duty" for the PC is an impressive work of digital cinema, in which you play as Allied troops during World War II in a series of missions across Europe. Another battle game, "Medal of Honor: Rising Sun," picks up the action in the Pacific, beginning with a harrowing escape from a battleship crippled during the attack on Pearl Harbor.

"Counter-Strike" debuts for Xbox and brings all the terrorists vs. counter-terrorists team play found in the free version that PC gamers have been battling with for years. For endless fun against human opponents, a $50-a-year Xbox Live account is a must-have.

For wannabe rock stars, there are several offerings to get your air guitars rocking and lungs wailing.

Entertain your friends with Microsoft's "Xbox Music Mixer," a karaoke program that lets you swap music and pictures with your personal computer.

Konami's "Karaoke Revolution" for PlayStation 2 adds a new twist to digital sing-alongs, testing your ability to sing in key. Earplugs are optional.

If you'd rather swing than sing, consider "DDRMAX2 Dance Dance Revolution," where you jump, whirl and tap your feet to the beat. Opt for the $60 bundle that includes the PS2 game and a rollout dance mat. Better yet, buy two mats for head-to-head competition with a friend. It's great for fitness junkies looking for a new exercise regimen, too.

There's a slew of sporting games, from snowboarding ("Tricky SSX3" and "Amped 2") to the skateboard adventure "Tony Hawk's Underground." There are lots of traditional games, such as "NCAA March Madness 2004" and the tennis game "Top Spin."

Meanwhile, "Prince of Persia: The Sands of Time" will have you sidestepping walls and even controlling time itself as you cavort through a medieval Persian palace in search of treasure.

From the makers of the puzzle-solving slideshow "Myst" comes "Uru: Ages Beyond Myst," a three-dimensional world of photorealism where gamers can interact with others online and uncover the mysteries of the ancient D'ni civilization.

There are two new editions of the Final Fantasy saga, a Japanese favorite replete with magic, warriors and ferocious monster battles. "Final Fantasy XI" is a massively multiplayer online role playing game for the PC, while the story-driven "Final Fantasy X-2" debuts for the PS2.

Everyone's favorite plumbing brothers, Mario and Luigi, are back again exclusively for Nintendo.

"Mario Party 5" for GameCube offers 60 mini-games you must win in a quest to restore peace to Dream World. And a game geared toward racing fans of all ages, "Mario Kart: Double Dash" is especially fun with two people, with one doing the driving and the other in the back seat, tossing obstacles to block opponents.