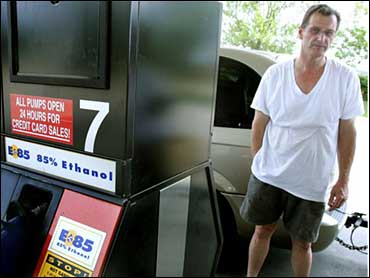 Like lots of motorists, Chuck Nye thought he had no choice but to grin and bear it as rising gas prices made filling up his minivan a painful experience.

But then he heard a radio ad promoting E85 — a blend of 85 percent ethanol and 15 percent gasoline — that sells for an average of about 45 cents per gallon less than regular unleaded. Inside his fuel door was a sticker saying Nye had a flexible fuel vehicle, which can burn the homegrown alternative.

"It's good gas," he said while fueling up at a Holiday station just off Interstate 35E in this Twin Cities suburb. "I haven't noticed any difference in gas mileage performance or engine performance as well."

Interest in E85 has been growing in recent months due to frequent spikes in gasoline prices. Promoters say it's not only cheaper, it reduces America's dependence on foreign oil and burns cleaner. And it's a boost to the Midwest farm economy because ethanol is distilled mainly from corn.

More than 4 million flexible fuel vehicles — which can run on any blend of gasoline and up to 85 percent ethanol — are currently on the road in the United States, according to government figures.

But most of them rarely use E85. Sometimes it's because owners don't know they can, but mainly it's due to the limited availability of the fuel, according a report from the U.S. Department of Transportation and Environmental Protection Agency. About 400 retail filling stations offer E85 nationwide, most located in the Midwest.

But that number is rising, according to Tim Gerlach, director of outdoor air programs for the American Lung Association of Minnesota and a leader in the E85 push.

Minnesota has close to 150 E85 pumps, Gerlach said, more than any other state by far. Illinois, a top corn-producing state that has been another leader in promoting E85, has about 20 stations with a goal of 100 by the end of next year.

"It's mainly a Midwestern corn-ethanol thing right now but it is spreading, and I think once it catches on you're going to see a lot of attention on it," Gerlach said.

Availability on the East and West Coasts is likely to grow if Congress approves a proposed tax incentive for stations to install E85 equipment, said Michelle Kautz, spokeswoman for the National Ethanol Vehicle Coalition. That provision is part of the energy bill approved by the Senate on Tuesday, but is not in the House version and is one of several differences that must be reconciled in conference committee.

Limited availability elsewhere was why Nye stopped to top off his tank at the Holiday station in Eagan, which sells more E85 than any other station in Minnesota. He was towing a trailer to Pennsylvania to move his daughter home from graduate school, and a check of the Internet showed Chicago would be his last chance to get E85.

The National Ethanol Vehicle Coalition has a nationwide station locator on its Web site.

Availability isn't usually a problem for Sara Westberg, who drives a government-owned flexible fuel 2000 Ford Taurus for her job with the Minnesota Department of Health. She said that in the past year she'd only rarely resorted to regular gasoline.

General Motors Corp., Ford Motor Co., DaimlerChrysler, Nissan Motor Co., Isuzu Motors Ltd. and Mazda Motor Corp. make flexible-fuel versions for certain models, sometimes only for sale as fleet vehicles. The differences under the hood are relatively few, so prices are similar to vehicles with comparable standard engines. But E85 should not be used in vehicles not designed for it.

One way to tell if a vehicle can use E85 is to check the owners' manual. Many flexible-fuel cars also have decals inside the fuel door saying they can use it. The National Ethanol Vehicle Coalition keeps a comprehensive list on its Web site, as well as a guide for telling definitively from the car's vehicle identification number.

Mileage is somewhat lower with E85 depending on the vehicle, Gerlach said, ranging from 2 percent less for some newer vehicles to 17 percent less for some older engines. But drivers say the lower cost per gallon more than makes up for that. By comparison, the E85 Nye pumped into his car was 22 percent cheaper than regular unleaded at the same pump.

Minnesota emerged as the nation's leader in E85 because it was one of three pilot markets, along with Chicago and Denver, in the U.S. Department of Energy's Clean Cities Program, Gerlach said. The program seeks to build up an alternative fuel infrastructure so people burn less gasoline, he said.

While regular gasoline prices have been rising, ethanol prices have stayed down because of a rapidly growing ethanol supply and federal tax subsidies. That's meant E85 running anywhere from 30 to 60 cents a gallon cheaper than gasoline.

Mike Jorgenson said he could save big money if he had a flexible-fuel vehicle for his daily 130-mile round-trip commute. His '97 Chevy Blazer gets a depressing 15.5 miles per gallon, he said, as he filled it up with regular unleaded from a pump that also offered E85 for 45 cents less.

"I really wish I had a vehicle that I could convert over to E85," he said wistfully.