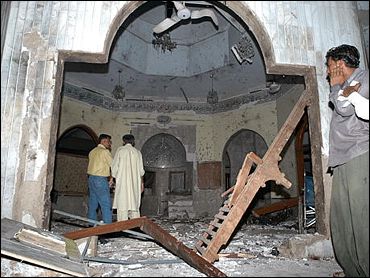 Police exchanged fire with rioting mourners Tuesday as thousands gathered for the funerals of 20 killed in an apparent suicide bombing at a crowded Shiite Muslim mosque, the latest terrorist attack in Pakistan's largest city.

Mobs set fire to vehicles and property, including American fast-food restaurants, and battled with thousands of police and paramilitary forces put on alert after Monday's bombing that increased fears of sectarian clashes between Sunni and Shiite Muslims.

President Gen. Pervez Musharraf pledged to stem the wave of bloodshed. His options include replacing the leadership of the city or provincial security establishment, or declaring a state of emergency that would give the military a greater hand in running the port city of 14 million people.

About 10,000 people attended the funerals Tuesday for the victims of the explosion, gathering for prayers outside the wrecked Imam Bargah Ali Raza mosque. Many beat their chests as a sign of mourning and chanted "Death to America" and slogans against Musharraf's government.

The funeral corteges drove to two different Shiite graveyards. Police in riot gear lined the streets as the processions passed.

A few hundred of the mourners started stoning police, who fired tear gas. Rioters set fire to three buses, shops and offices near the mosque. There were exchanges of gunfire between police and rioters, but there was no immediate word on injuries.

The bombing ripped through the mosque during evening prayers on Monday, and the death toll rose to 20 Tuesday when four of the injured died of their wounds. At least 75 were injured. No one claimed responsibility.

Elsewhere in the tense city, Malik said mobs set fire to KFC and McDonald's restaurants in Gulshan-e-Iqbal district, and restaurants, shops and gas station were burned in the Ancholi area.

Karachi has been wracked by violence between the Sunni Muslim majority and Shiite minority, and the attack was seen as revenge for the assassination Sunday of a senior Sunni Muslim cleric, Nazamuddin Shamzai, that also triggered street battles between youths and police.

Police retrieved a body from the scene of the mosque explosion and were examining it to determine whether it was that of a suicide bomber.

The blast cracked walls, destroyed an inner office and badly damaged a room where people wash up before praying at the mosque, near the city center on Karachi's main highway. It also shattered windows in a tall building opposite the mosque.

Long a flashpoint for Pakistan's religious and political conflicts, Karachi has been reeling since May 7, when a suicide bombing at a Shiite mosque killed 23 people. The drive-by shooting of pro-Taliban cleric Shamzai on Sunday triggered a night of rioting by his furious supporters.

On May 26, a twin car-bombing near the U.S. consul-general's residence killed a police officer and injured about 40 people. That attack has been labeled retaliation by outlawed terror group Harkat-u-Mujahedden-al-Almi over the arrest of seven members in recent weeks.

Harkat is accused of a failed attempt to assassinate Musharraf with a car bomb in 2002 and of a car bombing at the U.S. Consulate in the same year that killed 14 people. Harkat detests Musharraf for allying Pakistan with the United States in the war on terrorism. Musharraf was the target of two additional assassination attempts late last year.

On Tuesday, Shiite Muslim clerics urged mourners to show restraint during funerals for the bombing victims.

"Everybody who is a Muslim should understand that some elements want (to) create unrest," said Yousaf Hussain, a Shiite leader. "They are the enemy of Pakistan and Islam, and I ask you to understand this conspiracy and show patience."

Pakistan gained independence in 1947 from Britain as the Muslim part of the former colony that also included mostly Hindu India. It is now 97 percent Muslim, with more than three-fourths adhering to the Sunni school.

Most Muslims are Sunni, although Iran, Iraq and a few other countries have Shiite majorities. Sunni and Shiite Muslims stand on either side of a schism dating back to Islam's early days over who should succeed the Prophet Muhammad as the leader of the faith.