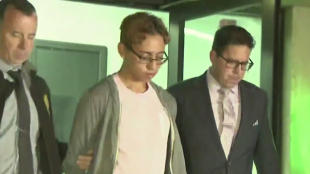 NEW YORK -- The student accused of stabbing a classmate to death and seriously injuring another during history class at a Bronx high school had been picked on since the school year started, fellow students and police said.

But the boys 18-year-old Abel Cedeno is accused of attacking at the Urban Assembly School for Wildlife hadn't bothered him before, not until Wednesday morning's third-period history class, when they started tossing broken bits of pencils and paper at his head, authorities said.

Cedeno snapped, they said. He excused himself to go to the bathroom, and came back with a a swichblade. The victims continued throwing pencils, CBS New York reports, and Cedeno allegedly started fighting and slashing at them, police said.

Fifteen-year-old Mathew McCree was killed and a 16-year-old was seriously wounded. CBS New York reports the injured 16-year-old had tried to intervene.

While school safety agents raced to the room and the teachers and students tried to stop the bleeding, a counselor confronted Cedeno in the hallway and he handed over the blade, police said. The stabbing triggered a school lockdown and worried parents rushed to the scene.

"We have one dead, one scarred and one in prison and a whole lot of children who are traumatized," parent Wanda Gonzalez told CBS New York.

Cedeno was charged Thursday with murder and weapon possession. The Legal Aid Society, which was representing him, said its lawyers were talking with Cedeno and his family, "reviewing the facts and circumstances of this case including the long history of bullying and intimidation Abel has endured."

Cedeno told police that he bought the switchblade online for protection and had been harassed at least since the school year began. But he didn't specify why, Chief of Detectives Robert Boyce said Thursday.

Yanique Heatley, 18, a student at the school, told reporters that Cedeno was "different from the other guys."

"He likes Nicki Minaj, stuff from H&M. He likes Kylie Jenner," she said.

"He usually gets bullied a lot," said Asia Jones, 18. She said fellow students bothered Cedeno in the hall and "talk crap to him."

On his Instagram page, Cedeno posted pictures and videos of himself with flowers in his hair, strutting down a street and singing along with female rappers.

"I thought I was cute," he posted in the caption of one video.

Police said Cedeno had not gone to school officials before with any complaints of harassment. The teen's mother was stuck in Puerto Rico following Hurricane Maria, and it wasn't clear if she even knew her son had been arrested. He was being held without bail.

New York City schools have had anti-bullying campaigns in place for years, and school officials say instances of bullying or harassment are dealt with firmly.

The Urban Assembly school is an intermediate and high school housed in a large red brick building in the Bronx that also includes an elementary school. There are about 1,100 students there.

It was the first homicide inside a New York City school since 1993, when a 15-year-old student stabbed a classmate to death at a junior high school in Manhattan. The 1993 killing came during a stretch that saw four students killed in public schools in 12 months — violence that prompted schools to start installing metal detectors.

The Bronx school was open Thursday. The mayor and schools chancellor were there, and grief counselors were on site. The students were scanned for weapons Thursday, but the building didn't have metal detectors — police said there hadn't been a need for them.

"They should have had metal detectors in this school," parent Trina Nimmons told CBS New York. "They shouldn't have waited for somebody to die to put them in."

City officials and parents have debated for years whether the school system should be installing more metal detectors or taking them away because of the stigma of attending a school deemed unsafe enough to require a weapons check.

"After yesterday's incident, of course we're going to evaluate what goes on throughout the school system," Police Commissioner James O'Neill said. "Our goal, of course, is to keep the children as safe as possible."