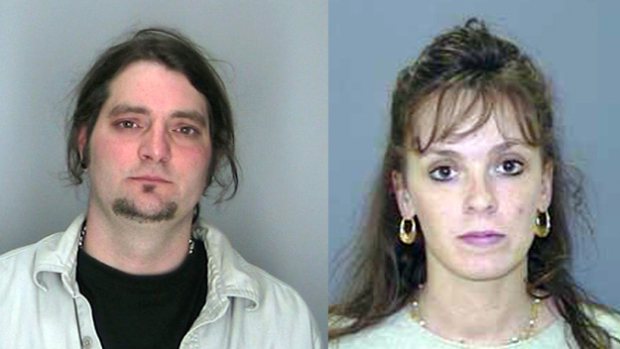 SUFFERN, N.Y. - A woman and her boyfriend moved in with her uncle, stole from his bank accounts and then suffocated him before jumping to their deaths off the George Washington Bridge, police said Wednesday.

The murder suspects were holding hands as they jumped from the bridge, police said, according to CBS New York.

Suffern Police Chief Clarke Osborn said investigators are confident they have pieced together the strange story but acknowledged that with all three principals dead, "We may never be able to answer some of the questions."

The killing of William Valenti, 70, of Suffern, was discovered Monday by a nephew, Osborn said. The killers, identified by police as Nickie Hunt, 40, and Gary Crockett, 41, had tried to delay the discovery of the body by posting a note on the back door that said Valenti had been taken to a hospital, the chief said. But Valenti was in his bedroom, dead from asphyxiation.

Osborn said police have not established how he was suffocated or which person did it.

Detective Craig Long said Hunt also left a few notes, including to her family. One was addressed to "the four most amazing kids this world has ever seen or ever will." He said that note did not mention the killing or admit guilt but apologized in general for the children's upbringing and Hunt's estrangement from their father.

Hunt left behind four children, CBS New York reports. The children did not live with Hunt.

"The tenor of the note indicates that she is going down a dark road" but does not specifically mention suicide, Long said. Crockett left no note, he said.

As detectives investigated the killing, they learned about a "family dispute" - Valenti had accused the couple of stealing more than $1,000 from him and had threatened to go to the police, Osborn said.

Several hours after the killing, a police dispatcher heard about the George Washington Bridge double suicide and mentioned it to detectives. The jumpers carried no identification, but their description - a white man and woman in their 40s - fit the suspects. The key to Valenti's Chevrolet Malibu was in the dead woman's pocket, Osborn said, and the two have since been positively identified.

Osborn said investigators believe Hunt and Crockett fled the murder scene in the Malibu, drove the 20 miles to one side of the bridge, walked out onto the span and jumped. He said the car has not been found.