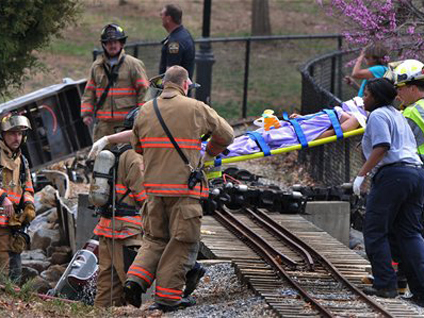 COLUMBIA, S.C. - The man driving a children's train that crashed over the weekend, killing a 6-year-old boy and injuring dozens of others, told police he knew he was driving too fast just before the wreck, according to documents released Tuesday.

"I was going too (expletive) fast," Matt Conrad told a police officer riding with him to the hospital after the crash Saturday, according to incident reports released by the Spartanburg Public Safety Department.

Conrad, 42, was operating a nearly 60-year-old mini train known as "Sparky" at Cleveland Park in Spartanburg, in the northwestern part of the state. During a third loop around the track, the train went off its tracks, toppling off a bridge and injuring the 28 passengers on board.

One of those passengers, 6-year-old Benji Easler, died in the crash. Other passengers' injuries ranged from bumps and bruises to broken bones. Some of the children were taken away on stretchers.

Conrad is distraught over the boy's death, his mother told The Associated Press on Tuesday. "I don't think this has hit Matt yet," Virginia Conrad said by telephone from her home in Winnsboro. "He looks like a football player, but inside he is like soft ice cream. ... I still believe he is in shock."

Authorities have not said what caused the crash, but Conrad's statement bolsters comments from eyewitnesses who said the train sped up during its third lap around the downtown park.

Many of those on the train were members of Corinth Baptist Church in Gaffney, where Easler's father is a pastor. A minister acting as their spokesman said passengers told him the train was speeding up on its final circuit.

"All of my people said the train got faster and faster," Ellis said. "They felt like it was increasing in speed and something was wrong."

The ride, which opened a week early because of the warm spring weather, was supposedly checked by a state inspector last Wednesday and allowed to open for operation. But after the crash, the inspector came forward to say that he had falsified his report and had not checked the train's speed because its battery was dead. State officials said the inspector was fired Monday.

Virginia Conrad described her son as a kind parent who would never intentionally harm anyone and who rushed to help his passengers after the crash. "When he did come to, he joined the rest. He helped to rescue people," she said. "He walked the train and helped those that he could." A train enthusiast from a young age, Conrad is a railroad history buff who loves his job driving children on the train at Cleveland park, his mother said. "This has hit him terribly hard," Virginia Conrad said.
View CBS News In
CBS News App Open
Chrome Safari Continue