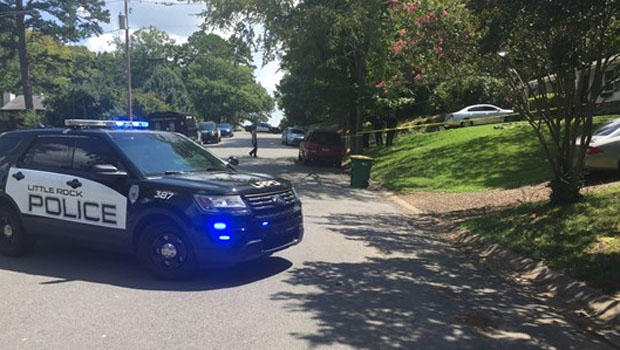 LITTLE ROCK, Ark. -- Officers responding to the scene of a possible suicide by a 39-year-old man in Little Rock found an even more disturbing scene when they discovered the victim was dead in bed along with his two children, Arkansas police said.

A cause of death wasn't immediately released, but police said they were no obvious signs of trauma on the children.

All three bodies were taken to the medical examiner for autopsies to determine the exact cause of death, reports CBS affiliate THV11.

A neighbor told the station Mangan was an airplane mechanic who had served in the military in Iraq.

The deaths come amid a dramatic spike in homicides in Little Rock. Following the Sunday deaths, Arkansas' capital city has now seen 45 homicides this year, three more than all of last year.

A downtown Little Rock nightclub was the site of a shooting during a rap concert that left 28 people injured in early July.

The Little Rock Police Department began increasing officer patrols in certain parts of the city Friday in an effort to curb the violence. Police spokesman Steve McClanahan told The Associated Press Monday that even with police working additional hours, situations like the apparent murder-suicide won't be prevented.

"You could have a thousand extra police, and you'll still have this," McClanahan said.

Little Rock is on pace to approach an annual total of homicides not seen since the city's gang wars of the early 1990s. Justice Department figures show 68 deaths in 1993 attributed to murder or manslaughter. Little Rock police spokesman Steve McClanahan has said other killings, such as justifiable homicide, pushed the total to 78 that year.