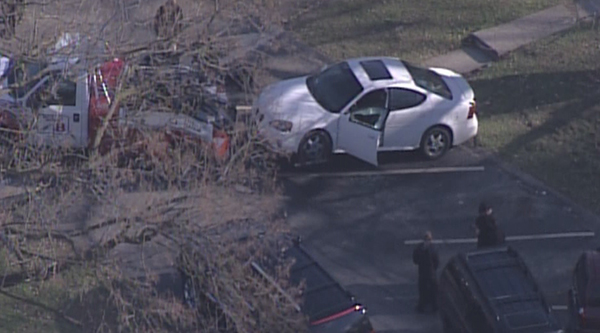 FERGUSON, Mo. -- The body of a man discovered dead in a car Tuesday in Ferguson, Missouri was burned and shot in the head, according to St. Louis County police.

Police on Wednesday identified the victim as DeAndre Joshua, 20. His death is being investigated as a homicide, but police have not said whether it's connected to the violence that broke out after the announcement of a grand jury decision to not indict white Ferguson police officer Darren Wilson in the fatal shooting of black 18-year-old Michael Brown.

Joshua's body was found Tuesday morning at the wheel of a 2004 Pontiac parked near the apartment complex where Brown was killed. He had severe burns, and an autopsy determined that Joshua was shot once in the head.

Officials say it appears an accelerant was used in an attempt to light Joshua's body on fire. The attempt was partially successful, however the fire apparently went out on its own, according to police.

Joshua sustained severe burns to his arm, fingers and both legs, according to police. His body had apparently been in the car for several hours before it was discovered, police said.

Pictures from the scene appear to show a white sedan with its window shot out.

Richard Taylor, who lives near where the body was found, told the St. Louis Post-Dispatch he saw four people with guns outside of his apartment Monday night who were talking about looting and saying they wanted to kill someone.

Taylor reportedly said he called police after he overheard those people, but officers never showed up.

In a statement, police said they have spoken to several family members and a friend who were with the victim earlier in the evening. Detectives were interviewing possible witnesses.