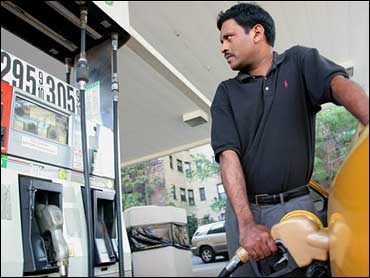 First there was road rage, then air rage, then sports rage, and now -- gas rage.

As gas prices soar to a record high of more than $3.00 per gallon, so too do incidents of violence and theft at the pumps.

Notably, Husain "Tony" Caddi, 54, the owner of a gas station in Alabama, who was run down and killed by a driver who had just helped himself to $52 worth of gas. The driver has since surrendered to police.

And "it may get worse before it gets better, especially if we have periods of acute shortages, price hikes, or both where we will see more rageful incidents, anger, and irritability at the pumps," says Jerry Deffenbacher, Ph.D., professor in the department of psychology at Colorado State University in Fort Collins, Colo. Such acute circumstances "can escalate an already simmering situation," he says.

And the already high prices may get even higher as a result of Hurricane Katrina, which pounded the Gulf Coast of Mississippi earlier this week. As a result, an estimated 633,000 barrels of daily crude oil production, 42 percent of the daily average output from the Gulf Coast, was halted and at least eight refineries were also shut down.

The Bush administration has now released the reserve of oil from the government's emergency stockpile, but that may only keep prices where they are, not lower them.

No matter what happens, you can keep safe during this crisis by keeping your cool and staying out of harm's way, he says.

"It makes sense that people are getting angry at the pumps," Deffenbacher says. "Some of the cases are individuals who are more prone to an anger or a rage reaction in general," he says. "But you also may have reasonable people who react when a series of frustrations stack up."

And due to the aftermath of the hurricane, "we may get back to the early 1970s with gas lines and even more people will become irritable," he notes. During the 1970s, intense shortages led to long lines and reduced hours at gas stations.

"Be realistic," Deffenbacher says, "Gas prices have gone up for everyone, it's not a conspiracy, so it's like being angry at the weather. People may also have to adjust their expectations about how much they can drive or how much it will cost."

Slow, deep breathing may be appropriate for people who are moderately to somewhat upset. But "the person who is enraged and has already lost control is past the point where they will use these techniques," he says. "They may need an environmental intervention" or a time-out where they are moved from the tense situation.

"If you are there at a gas station and someone is beginning to lose it, back away and get out of it," he says. "Perhaps call 911 if it looks like it is escalating to some level of violence."

The best way to stay safe at the pump is to mind your own business, agrees Robert R. Butterworth, Ph.D., a psychologist at International Trauma Associates in Los Angeles. "Don't create a situation where you can be a target and don't give anyone an excuse to be mad at you."

And if you are feeling frustrated and angry, remember that the gas station attendants and owners are not the enemy, he says. "It's really important not to take out your frustration over soaring prices on the service station owner because they are not making money either -- and they are under a lot of stress," he says, suggesting that owners may be at risk of posttraumatic stress disorder in the future based on recent incidents of gas rage.