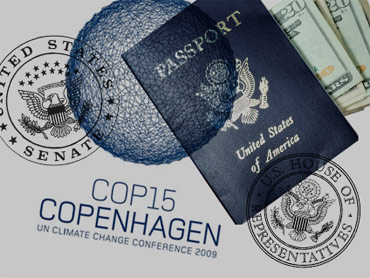 Few would argue with the U.S. having a presence at the Copenhagen Climate Summit. But wait until you hear what we found about how many in Congress got all-expense paid trips to Denmark on your dime.

CBS investigative correspondent Sharyl Attkisson reports that cameras spotted House Speaker Nancy Pelosiat the summit. She called the shots on who got to go. House Majority Leader Steny Hoyer, and embattled Chairman of the Tax Committee Charles Rangelwere also there.

That's not the half of it. But finding out more was a bit like trying to get the keys to Ft. Knox. Many referred us to Speaker Pelosi who wouldn't agree to an interview. Her office said it "will comply with disclosure requirements" but wouldn't give us cost estimates or even tell us where they all stayed.

Senator Inhofe (R-OK)is one of the few who provided us any detail. He attended the summit on his own for just a few hours, to give an "opposing view."

"They're going because it's the biggest party of the year," Sen. Inhofe said. "The worst thing that happened there is they ran out of caviar."

Our investigation found that the congressional delegation was so large, it needed three military jets: two 737's and a Gulfstream Five -- up to 64 passengers -- traveling in luxurious comfort.

Along with those who flew commercial, we counted at least 101 Congress-related attendees. All for a summit that failed to deliver a global climate deal.

As a perk, some took spouses, since they could snag an open seat on a military jet or share a room at no extra cost to taxpayers. Rep. Gabrielle Giffords (D-AZ) was there with her husband. Rep. Shelley Moore Capito (R-WV)was also there with her husband. Rep. Ed Markey (D-MA) took his wife, as did Rep. Jim Sensenbrenner (R-WI). Congressman Barton-- a climate change skeptic -- even brought along his daughter.

Until required filings are made in the coming weeks, we can only figure bits and pieces of the cost to you.