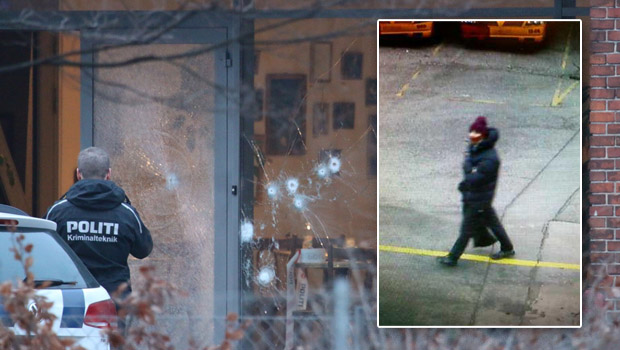 COPENHAGEN, Denmark -- At least one gunman opened fire Saturday on a Copenhagen cafe, killing one man in what authorities called a likely terror attack during a free speech event organized by an artist who had caricatured the Prophet Muhammad.

The shooting, which also wounded three police officers, came a month after extremists killed 12 people at a satirical newspaper in Paris that had also sparked Muslim outrage with its depictions of Muhammad.

Swedish artist Lars Vilks, who has been repeatedly threatened after depicting Muhammad as a dog in 2007, organized and attended Saturday's event but was not hit by gunfire, police said.

"I saw a masked man running past," said Helle Merete Brix, one of the event's organizers. "I clearly consider this as an attack on Lars Vilks."

She and Vilks were quickly ushered away by the security detail that accompanies the artist whenever he is in Denmark.

Vilks, 68, later told The Associated Press he believed he was the intended target of the shooting.

"What other motive could there be? It's possible it was inspired by Charlie Hebdo," he said, referring to the Jan. 7 attack by Islamic extremists on the French newspaper.

"At first there was panic. People crawled down under tables," Vilks said. "My bodyguards quickly pulled me away."

The cultural center had a lecture hall as well as a cafe. Vilks said no one in the hall was wounded.

"We were well isolated in there. It would have been much worse if this happened during the break, when people walk out," Vilks said.

He said he deplored the death and the injuries but was unfazed as to what it meant for his own safety.

"I'm not shaken at all by this incident. Not the least," he told AP by phone.

There was no immediate claim of responsibility for the shooting, which took place shortly before 4 p.m. (10 a.m. EST). Denmark's security service, PET, said the circumstances surrounding the shooting "indicate that we are talking about a terror attack."

"We feel certain now that it is a politically motivated attack, and thereby it is a terrorist attack," Danish Prime Minister Helle Thorning-Schmidt told reporters. "We take this situation extremely seriously. We are at a high alarm all over the country."

Visiting the scene of the shooting, Thorning-Schmidt said "our highest priority is to get the perpetrator arrested."

Danish police said the gunman used an automatic weapon to shoot through the windows of the Krudttoenden cafe, which TV footage showed were riddled with bullet holes. The gunman then fled in a carjacked Volkswagen Polo that was found later a few miles away, police said.

"I heard someone firing with an automatic weapons and someone shouting. Police returned the fire and I hid behind the bar. I felt surreal, like in a movie," Niels Ivar Larsen, one of the speakers at the event, told the TV2 channel.

Police initially said there were two gunmen but later said they believed there was only one shooter, and described him as 25-30 years old with an athletic build, and carrying a black automatic weapon. They released a blurred photograph of the suspect wearing dark clothes and a scarf covering part of his face.

The Copenhagen event, titled "Art, blasphemy and freedom of expression" featured a panel discussion about freedom of speech in the wake of the Charlie Hebdo shootings in Paris.

Danish police said the victim Saturday was a 40-year-old man who was inside the cafe attending the event. He has not yet been identified.

Police spokesman Joergen Skov said it was possible the gunman had planned the "same scenario" as in the Charlie Hebdo massacre.

François Zimeray, the French ambassador to Denmark who was at the event to speak about the Charlie Hebdo attack, tweeted that he was "still alive." Police said he was not wounded.

French President Francois Hollande called the Copenhagen shooting "deplorable" and said Thorning-Schmidt would have the "full solidarity of France in this trial." French Interior Minister Bernard Cazeneuve was travelling to Copenhagen as soon as possible, Hollande said in the statement.

Sweden's security service said they were sharing information about the case with their Danish counterparts but declined to give details.

Vilks, a 68-year-old Swedish artist, has faced several attempted attacks and death threats after he depicted the Prophet Muhammad as a dog.

A Pennsylvania woman last year got a 10-year prison term for a plot to kill Vilks. In 2010, two brothers tried to burn down his house in southern Sweden and were imprisoned for attempted arson.

Vilks told The Associated Press after the Paris terror attacks that, due to increased security concerns, even fewer organizations were inviting him to give lectures. He also said he thought Sweden's SAPO security service, which deploys bodyguards to protect him, would step up his security.

"This will create fear among people on a whole different level than we're used to," he said. "Charlie Hebdo was a small oasis. Not many dared do what they did."

The depiction of the prophet is deemed insulting to many followers of Islam. According to mainstream Islamic tradition, any physical depiction of Muhammad - even a respectful one - is considered blasphemous.

While many Muslims have expressed disgust at the deadly assault on Charlie Hebdo employees, many were also deeply offended by its cartoons lampooning Muhammad. The newspaper also lampoons other religions, as well as governments and politicians.