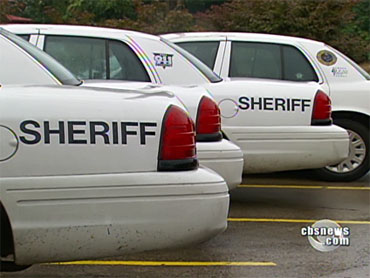 (CBS)
Dean Reynolds is a CBS News Correspondent based in Chicago.

To say times are tough economically in this country is an understatement. But the sheriff of Alexander County, Illinois has set a new standard for deprivation. Sheriff David Barkett had his official cruisers repossessed by the local bank in the county seat of Cairo.

Usually, when you see a lot of sheriff's cruisers in a bank parking lot it means a crime has been committed. Say, a bank robbery. But not now. Four of Barkett's five cruisers (the fifth one is in the shop for repairs) now sit humiliatingly in the lot of the First National Bank of Cairo, shorn of their emergency lights, antennae and even their seals. You can see the faint outline of them on the suddenly denuded cruisers.

Alexander County, estimated population: 8,000 started the year $500,000 in debt and revenues have not exactly picked up. There is a "historic downtown area" that includes many more empty storefronts than businesses. Indeed, Cairo doesn't even have a McDonald's. Crime, especially drug trafficking is a big problem.

That's why the cutbacks forced upon Sheriff Barkett are so painful. "God willing," he told us, "We're going to protect these people. And we're going to continue with what we got. We're used to struggling."

In addition of losing the cruisers, the county commissioners laid off about 15 of 20 or so deputies and staff workers Barkett once employed. And starting Oct. 1, the tri-county jail says it will not accept any more prisoners from Alexander County because of non-payment of the $53-per prisoner per-day fee. What prisoners they arrest, will have to be held in the county courthouse.

So I asked Barkett about all of this and the fact that this was a pretty extreme example of recessionary hard knocks. He readily agreed. "I'd say it's very extreme when it affects the protection of lives and property," said Barkett.

A county commissioner Angela Greenwell told us the county simply has no money and no where to turn for help.

But that's not entirely true, it turns out.

Barkett and a few of his friends took advantage of a national network of law enforcement agencies to send an S.O.S. about the county's plight. And as fast as you could say "Sunshine State," St. Lucie County, Fla., responded by shipping five used cruisers to Illinois for Sheriff Barkett's use.

"Timing was of the essence," said St. Lucie County Sheriff Ken Mascara. "We had the vehicles (used Ford Crown Victorias, actually). They were headed for auction and we were not going to receive a lot of money for them. And I know he (Barkett) will see them as priceless."

Barkett is very grateful. Since last week, he's been patrolling in a loaner SUV from the governor's office. He's been working very long hours and has relied on volunteers and state troopers to pick up the slack for the forced reductions in his staff.

"Altogether it's about a 92-93 mile round trip," he said of the county patrols. "It's a big area for just four or five people to cover."

Now if he could just get his man back, they could be out driving those new cruisers.