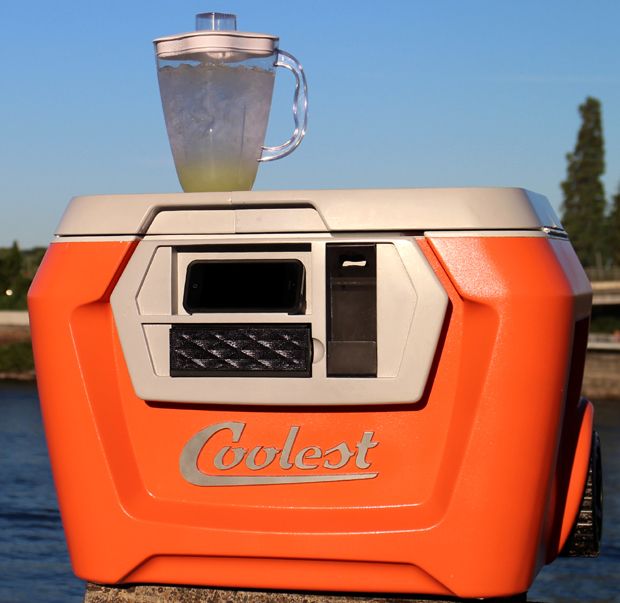 If you think the Coolest Cooler sounds, well, cool -- you're not alone. The high-tech, multifunction cooler has just become the most-funded project ever on Kickstarter, raising a record $11.3 million and counting. The total could grow still higher before the crowdfunding campaign closes at the end of this week.

The Coolest Cooler comes complete with a battery-powered blender, a water-resistant bluetooth speaker, a USB charger, a light, wheels... and oh yes, it keeps your drinks or picnic cool.

The previous Kickstarter king was the Pebble smartwatch, which raised $10.26 million in 2012.

Kickstarter attracts small-time investors with promises of early access to new products and a sense of community. Coolest Cooler inventor Ryan Grepper had set a goal of $50,000 for his fund-raising campaign, but the support he received from tens of thousands of backers was beyond his wildest dreams. In the first week he raised more than $5 million and started getting national media attention. At $7 million into his campaign, he told CBS This Morning,"I feel so overjoyed that so many people connected with...the Coolest Cooler."

Grepper built the first prototype nearly a decade ago, but the first time he tried funding it on Kickstarter, it didn't meet with the same success. Last November, his previous model was launched but did not reach the $125,000 goal and had to be withdrawn. Kickstarter is all or nothing - projects that fail to reach their funding goal don't get any money.

Disappointed at first, Grepper wouldn't give up and worked to fix the prototype, making it even better than before.

"I learned that I needed to be further along in the design of the product to really showcase my vision. So I created a more advanced prototype," he told CBS News via email last month. "I also learned that it's not best to launch a cooler when it's cold out."