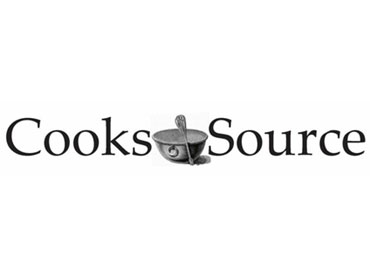 Cooks Source, a niche food publication in Western New England that set off an Internet outcry by stealing a writer's work and then glibly responding to her complaints, has apologized to the writer, made donations in her name, and shut down their Facebook page after their advertisers received threatening phone calls.

The kerfuffle started when Monica Gaudio blogged about finding out through a friend that Cooks Source had published a story she had written on apple pie without her permission. Gaudio repeatedly contacted the editor, Judith Griggs, about the publication, and requested that Griggs make a donation to Columbia Journalism School as a way of compensation.

Griggs responded that "the web is considered 'public domain' and you should be happy we just didn't 'lift' your whole article and put someone else's name on it!" She also said that since the article was in need of editing, "you should compensate me!"

The story was tweeted, picked up by Gawker, bloggers and the mainstream media, and commenters left a barrage of angry messages on Cooks Source's Facebook page. Cooks Source said in a statement on their website that their advertisers received hate mail and phone calls.

No media outlets have been able to get Griggs on the phone, and some have wondered if her response - perfectly tailored to draw Internet ire - was a fake.

According to the Economist, outraged readers found more than 100 cases of Cooks Source lifting articles from The Food Network, NPR and Martha Stewart, among other outlets.

The magazine apologized to Gaudio in a statement on their website, calling it an "oversight of a small, overworked staff," and said that they made donations to Columbia Journalism School and the Western New England Food Bank in her name. They also said they would now obtain written consent before using an article.

Gaudio blogged Wednesday that she had seen the apology and "I think that is about the best I am going to get." She wrote she wasn't sure the donations had been really made in her name - and, like any good reporter, she was going to call and check.