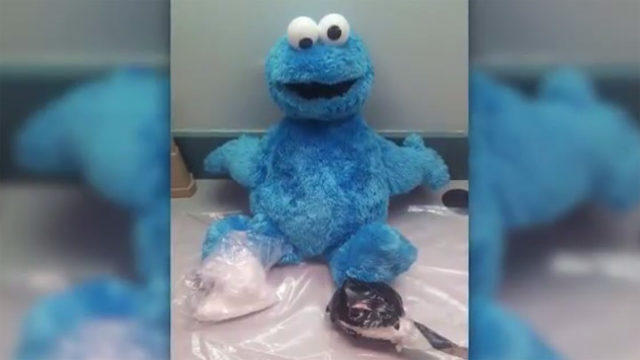 KEY WEST -- Authorities found cocaine hidden inside of a Cookie Monster toy while searching a vehicle in the Florida Keys, deputies said.

CBS Miami reports the cocaine was found just after midnight Wednesday when a deputy stopped the driver of a black Dodge after noticing the license plate was obscured. Tinted windows made it too dark to see inside the vehicle.

When deputies spoke to the driver, Camus McNair, they noticed a smell of marijuana coming from inside the car. While searching the vehicle, deputies found a backpack with a Cookie Monster toy inside, but it was heavier than normal.

Upon further inspection, authorities noticed a slit was cut. Two packages of cocaine, weighing about 314 grams, were found inside the toy.

Detectives found paperwork that belonged to McNair, which led them to believe it was his backpack. He was arrested and charged with trafficking cocaine at the scene.