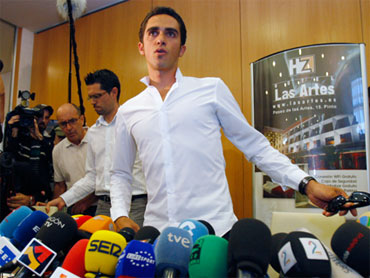 A World Anti-Doping Agency lab in Germany found a "very small concentration" of the banned substance clenbuterol in Contador's urine sample on July 21 at the Tour, according to a statement from the UCI.

Contador told a news conference Thursday in his hometown near Madrid: "It is a clear case of food contamination."

Contador said the meat was brought across the border from Spain to France during a rest day during the Tour. He said there were complaints about the food at the hotel where the team was staying.

Contador says he ate the meat on July 20 and again on July 21.

Contador called the UCI's suspension of him "a true mistake."