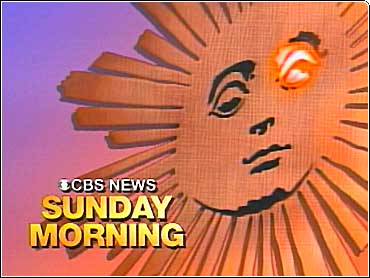 The Theme Song
The trumpet fanfare is called "Abblasen" and is attributed to Gottfried Reiche. For almost 20 years, Sunday Morning used a recording by Don Smithers, who played on an eight-foot baroque trumpet. Sunday Morning chose to retire the old, scratchy vinyl phonograph version in favor of a new, clearer, high-tech recording. This was provided by Doc Severinsen, the former music director of NBC's "Tonight Show," who performed the theme on a specially fabricated four-valve piccolo trumpet. Famed trumpeter Wynton Marsalis later recorded another version of the Sunday Morning theme, also on a piccolo trumpet, which is currently in use.

About Our Sun Images
The sun images that appear between some of our segments come from a variety of sources. One face might peek out at a producer visiting a flea market, while another golden orb may be found staring stonily from an ancient Egyptian vase in a museum. Some of the images show up in the mail; some are produced by more local artists. The face in the Sunday Morning logo, along with some of the other sun images shown during the show, are inspired by an out-of-print book entitled The Sun in Art.

Our director keeps a file of images to choose from as he works on constructing the show each week. As many viewers have observed, the suns' faces often reflect moods and ideas expressed during the program.

Since we don't own the rights to many of the suns we use, it's not possible for us to publish any books, photographs, or other material representing them. Many of the images are so interesting and beautiful, viewers ask to see them collected to look at more carefully. But for now, our images remain as transient and temporary as real sunrises and sunsets, meant to be appreciated in the moment.

It is possible to purchase Sunday Morning logo caps and t-shirts by logging on to the CBS Store or calling (800) 542-5621.