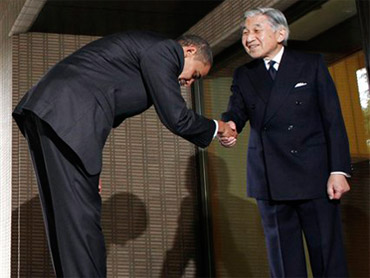 Some conservative commentators seized on President Barack Obama's deep bow to Japan's Emperor Akihito in Tokyo over the weekend, accusing the U.S. commander in chief of groveling before a foreign leader.

While it may have been an awkward moment, it wasn't without precedent. And it appeared to be well within protocol guidelines that the State Department issues for foreign service officers working in other countries.

U.S. presidents from both political parties have often been criticized for their attempts at culturally sensitive greetings to high-ranking foreigners.

Former President George W. Bush, a Republican, was mocked for holding Saudi Crown Prince Abdullah's hand, a traditional sign of friendship in the Middle East, as they strolled together in 2005.

In 1994, former Democratic President Bill Clinton was criticized for almost bowing to Akihito. The resulting image, The New York Times wrote, was of "an obsequent president and the emperor of Japan."

Former President Richard Nixon, a Republican, can be seen in a Life magazine photo from 1971 bowing to Akihito's father, Emperor Hirohito, who ruled when Japan bombed Pearl Harbor in 1941.

Obama's encounter with Akihito was a stumble because it mixed a bow with a handshake - something not normally done. And it wasn't the first time the president, a Democrat in office less than a year, has been criticized for his greeting of a foreign leader. Critics accused him of genuflecting to Saudi King Abdullah at a summit meeting of the leaders of the top 20 rich and developing nations earlier this year.

The current bow comes during a highly charged political moment in the United States. Conservatives are strongly opposing Obama's policies, especially his plan to overhaul the U.S. health care system, and they have seized on any perceived faux pas by Obama, carrying their message on talk radio and blogs.

An online video posted by the University of Connecticut College Republicans juxtaposed a series of upright handshakes between Akihito and other world leaders and Obama's low bow.

Andrew Malcolm, in a blog on the Los Angeles Times Web site, asked: "How low will the new American president go for the world's royalty?"

Obama's bow was compared with photos of former Vice President Dick Cheney giving Akihito a straight-backed handshake and Gen. Douglas MacArthur, who oversaw the post-World War II occupation of Japan, standing with his hands on his hips next to Hirohito.

State Department spokesman Ian Kelly told reporters Monday that the bow was "a sign of respect to the emperor."

In an online State Department posting from 2007 titled "Protocol for the Modern Diplomat," envoys are advised to be aware of greeting rituals such as kisses, handshakes or bows and to follow a country's tradition. "Failure to abide with tradition may be interpreted as rudeness or a lack of respect for colleagues," it says. It's not clear whether the guidelines apply to the president.

John Park, a senior researcher at the U.S. Institute of Peace think tank, said it is a respectful tradition for visitors to bow to the emperor in a formal setting.

But, he said, "We're in an environment right now where everything is hypersensitive. Any type of move that you do, there will be some group that sees some sort of message within all that."

The furor in the United States over the bow also shows how delicate any trip by Obama would be to Hiroshima and Nagasaki, the Japanese cities destroyed by U.S. atomic bombs at the end of World War II. Obama has said he wants to visit the cities sometime during his presidency.