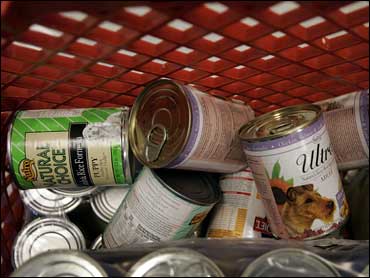 This column was written by David Goldstein.


In November 2006, America's dogs and cats started dying painful, mysterious and sometimes gruesome deaths — canaries in the coal mine of a food safety system on the verge of collapse. Previously healthy pets would suddenly vomit blood and bile, produce bloody diarrhea and lose control of bladder and bowel. Some animals displayed unquenchable thirst, while others refused to eat or drink at all. Victims became lethargic and withdrawn, their limbs wobbly, eyes cloudy and stomachs painfully distended. Then the seizures set in.

The nationwide veterinary chain Banfield estimates that as many as 39,000 dogs and cats were sickened or killed in this manner between December 2006 and February 2007 alone. Yet nobody seemed to notice — not the Food and Drug Administration, not the Department of Agriculture, not the Centers for Disease Control, not even Menu Foods, the little-known pet food manufacturing giant that had been fielding calls from concerned customers for months. It was not until late February, when its own animals started dropping dead just days into its quarterly taste test, that Menu Foods realized our beloved family pets were being poisoned by their own food.

Cut-rate imported Chinese wheat gluten, used to make the meat-like chunks in "cuts and gravy" pet food varieties, had been adulterated with a deadly cocktail of melamine and cyanuric acid, but what the media largely covered as just a "pet food recall" proved to be only one in a series of regulatory failures that have put our two-legged family members at equal or greater risk. In the months that followed, "voluntary recalls" were belatedly issued because of antifreeze in toothpaste, banned antibiotics in farmed seafood and lead paint on Thomas the Tank Engine toys — all imported from China and all unwittingly consumed or otherwise used by Americans for months, if not years.

And had this "food grade" wheat gluten made its way to the U.S. bakery and breakfast cereal manufacturers who use 530 million pounds annually, it could have created the largest and deadliest mass food poisoning in American history. Indeed, given the often silent, progressive nature of renal failure, and our regulatory and public health agencies' woeful inability to prevent, uncover, track or remedy such incidents, we cannot be certain that it already hasn't.

Hyperbole? Just days after pronouncing that there is "no acceptable level" of melamine and cyanuric acid in human food, the USDA and FDA suddenly recanted after learning that these industrial chemicals had also contaminated more than 23 million chickens and 56,000 hogs. Even as our pets were dying, the USDA/FDA issued a comically Orwellian joint press release proclaiming "no evidence of harm to humans" from eating melamine-tainted meat: "While the Centers for Disease Control and Prevention systems would have limited ability to detect subtle problems...no problems have been detected to date."

Clearly, our regulatory agencies wield neither the resources nor the mandate to enforce adequate standards at home, let alone keep pace with the rapidly globalizing food and drug industries. Americans were shocked to learn that the world's largest wheat exporter now imports more than 70 percent of its wheat gluten; but we also import 20 percent of our generic and over-the-counter drugs, 40 percent of active pharmaceutical ingredients and 80 percent of our seafood — much of it from developing nations with lax standards and little regulatory enforcement. Yet even as the FDA struggled to track poisoned gluten through the food supply, it announced plans to close seven of thirteen regional testing labs.

It would be convenient to blame this plodding, inadequate response on mere incompetence or negligence or even base corruption. But simply replacing one regulator with another (or executing an FDA director, as China has done) would do little to fix a regulatory system that lacks the mandate to regulate.

Yes, our regulatory agencies are incompetent. But they are incompetent by design. How else to explain a system that splits food safety oversight across multiple, noncoordinated agencies; that inspects no more than 1 percent of the imports that make up a growing portion of the American diet; and that even lacks the basic authority to impose mandatory recalls? How else to explain a government that promotes industry self-regulation, yet wages a court battle to prevent beef producers from testing all their cattle for mad cow disease — or that chooses to invest hundreds of billions of dollars fighting terrorists "over there" while cutting funds for protecting a vulnerable food supply at home? On stepping down from office in 2004, former Secretary of Health and Human Services Tommy Thompson warned, "I, for the life of me, cannot understand why the terrorists have not attacked our food supply, because it is so easy to do."

How do we explain yet another known terrorist threat gone unheeded?

The explanation is simple. For decades our government has been dominated by a conservative ideology that claims to despise big government, abhor regulation and adhere to an unswerving faith in the infinite wisdom of the market. Rick Perlstein dubs this philosophy "E. Coli Conservatism," and in practice it is not only flawed but corrupt: a calculated conservative project intended to gut our regulatory systems in the interest of sheer corporate greed. We eat adulterated food not because we cannot adequately regulate the industry but because to do so would eat into the profits of the corporations our regulators serve.

In the six years since 9/11, food-borne pathogens and toxins have quietly killed ten times the number of Americans who died in the terrorist attacks. How many more Americans must conservatism kill before our leaders embrace a more responsible ideology?
By David Goldstein
Reprinted with permission from the The Nation